Cable News: 22 Comparisons of Immigration Policy to the Holocaust, Slavery 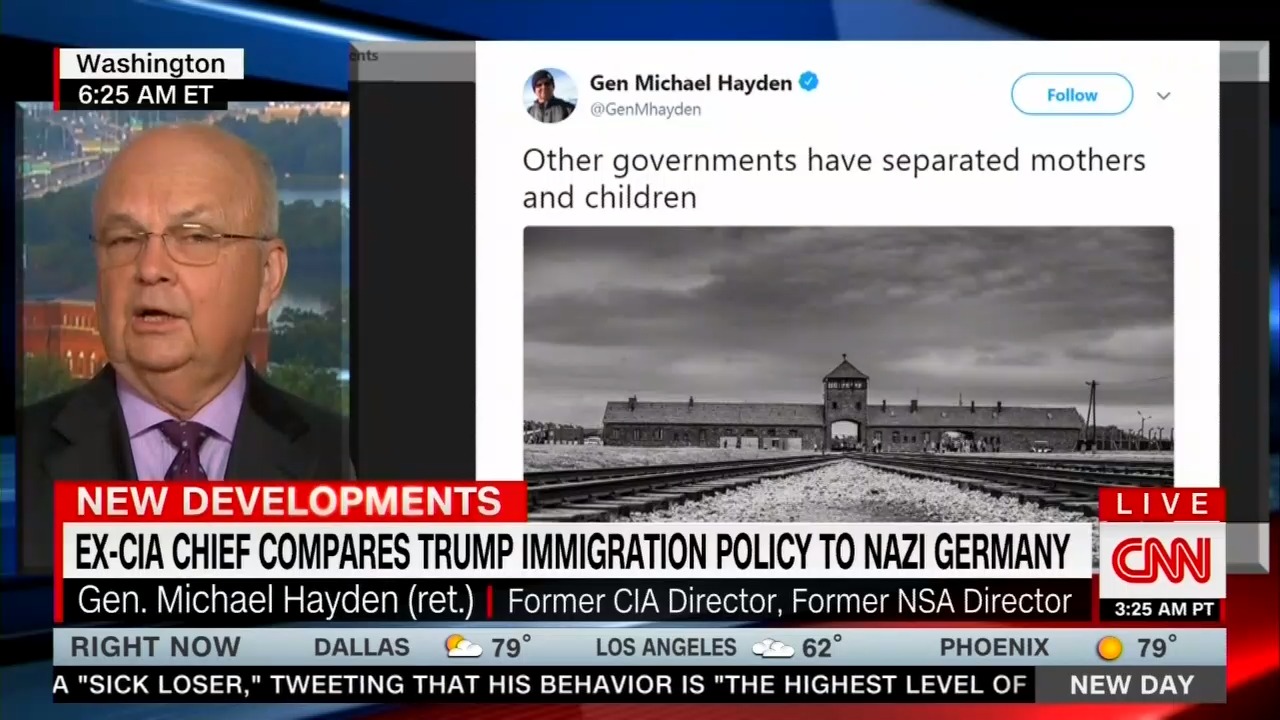 The pundit class have officially snapped over the Trump administration’s zero-tolerance border enforcement policy. Since Friday, the collective breakdown has yielded a total of 22 instances in which cable news commentators compared the separation of parents and children illegally entering the country to World War II-era war crimes and human rights violations.

The Holocaust was invoked 12 times across CNN and MSNBC between June 15 and the 18th, generally in the form of comparisons between DHS detention centers and Nazi concentration camps. There were also six mentions of Japanese-American internment camps, as well as four comparisons to slavery.

On Friday, MSNBC’s Joe Scarborough opened Morning Joe with a tasteless Holocaust reference. “Children are being marched away to showers,” he intoned, “just like the Nazis said they were taking people to the showers, and then they never came back. You’d think they would use another trick.”

Over the weekend, CNN political commentator Dave Jacobson threw a miniature tantrum over the policy. On Saturday’s CNN Newsroom during the 10 a.m. hour, he opined, “Donald Trump increasingly looks like Hitler in Nazi Germany.” The following day, he appeared again on Newsroom in the afternoon to embellish on his already hysterical take:  “Increasingly, Donald Trump is turning this nation into Nazi Germany and turning these [detention centers] into concentration camps.”

MSNBC’s Chris Matthews, evidently eager to join in the hyperventilating excitement, managed to last less than a minute before evoking concentration camps while hosting Hardball on Monday. Throughout the show, he repeatedly interrupted guests to draw their attention to images of crying children that flashed across the screen.

Media darling and former National Security Director General Michael Hayden poured gasoline on the fire with a June 16 tweet featuring an image of the Birkenau concentration camp along with the text, “Other governments have separated mothers and children,”: 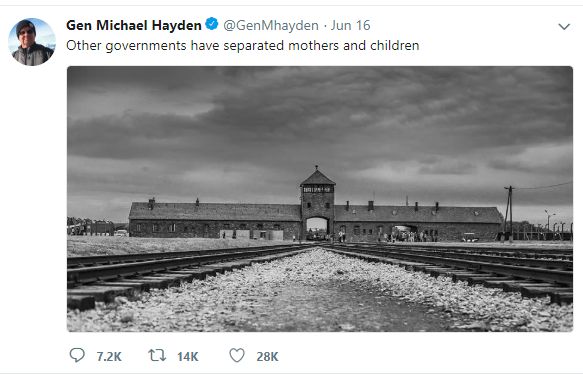 While cooler heads in the media condemned this comparison, Hayden later defended those statements during two CNN appearances on Monday. “Now look, I know we’re not Nazi Germany,” he said on New Day, “but there is a commonality there.”

He repeated that point on The Situation Room that same day: “I knew it would be controversial, but I felt a warning flare was necessary.” Hayden’s tweet was also featured on five different MSNBC shows on Monday, with hosts such as Nicolle Wallace of Deadline: White House and Stephanie Ruhle of MSNBC Live appearing reluctant even to criticize the comparison. “We don’t want to go too far, but is this warning valid?” Ruhle pondered anxiously on her 9 a.m. show.

Some pundits too squeamish for Holocaust references instead made overtures to America’s Japanese internment camps from World War II. MSNBC contributor Jonathan Capehart mentioned both those camps and the Trail of Tears on AM Joy, adding that he felt the practice was “very American.” Leadership Development Strategist Kwame Jackson echoed Capehart’s point later that day on MSNBC Live with Yasmin Vossoughian:

So absurd was the media's melodrama that even CNN’s Brian Stelter felt the need to step in and pump the proverbial brakes. On Sunday’s Reliable Sources, he posed a challenge to his guests: “Doesn’t the tone of this coverage offend a great deal of Americans who feel that the real scandal is that people are entering the country illegally in the first place?”