On Sunday, an anonymous Twitter user by the name of “Freesus Patriot™” posted an image on Twitter purporting to show a list of banned books in Florida and the intrepid fact checkers and guardians of misinformation at Snopes labeled it satire.

The list was obviously fake for it included 1984 and The Lord of the Rings. It also included The Adventures of Huckleberry Finn and To Kill a Mockingbird, which are famous for being removed from reading lists by blue school districts, but that didn’t stop prominent anti-Ron DeSantis blue checkmarks from sharing it. 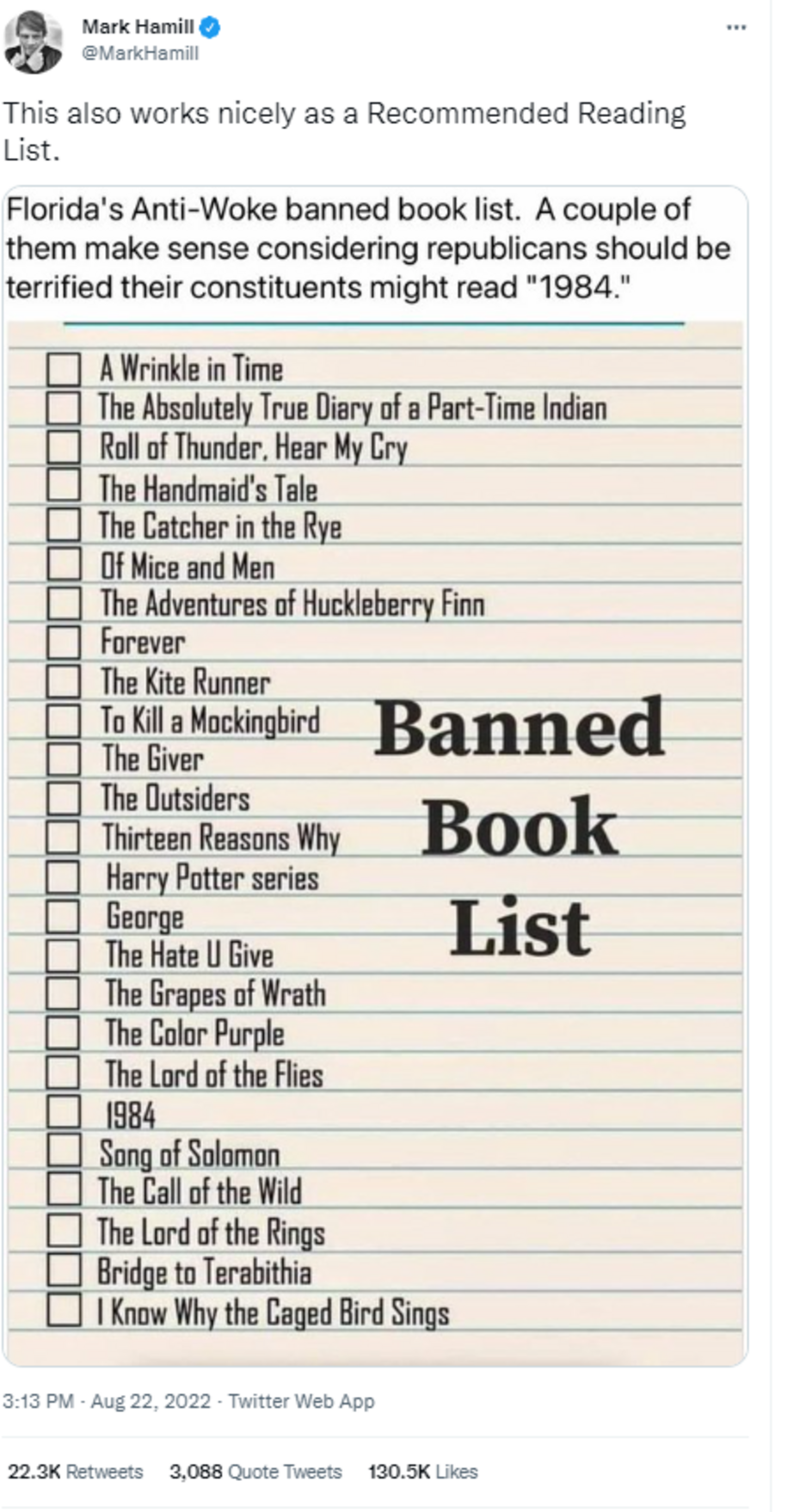 American Federation of Teachers President Randi Weingarten tweeted, then deleted, and then apologized for sharing the fake news. Prominent MSNBC Never Trumper and The Atlantic columnist Tom Nichols went with something resembling the “fake, but accurate” excuse while actor Mark Hamill shared the list on his account and got a reply from MSNBC host Katie Phang stating “we should start the BBC: the Boosted Books Club and amplify these titles!”

Freesus Patriot™ naturally got plenty of pushback for his bit of fake news as well, but according to Snopes “The tweeted list appears to have started out as an attempt at satire, although, as often happens on the internet, was quickly lifted from its original context and shared by those who assumed it was real… The list was originally posted by the owner of a Twitter account using the profile name ‘Freesus Patriot.’ That person stated the purpose of the original post was to mock various schools in Florida that were removing books from shelves in response to political pressure.”

That is a very generous assessment of Freesus’s motives. In a since-deleted tweet, Freesus claimed that “I’m not going to say where this list came from due to protecting sources but if this list is wrong then I invite @RonDeSantisFL to publicly state the books on this list will not be banned in Florida & he intends to protect student’s rights. I will take it down if he does.”

The Snopes article by Bethania Palma does not mention this tweet. It is likely that the account that has a cartoon picture of a bald eagle in front of an American flag as its profile picture hoped to embarrass DeSantis and didn’t expect to get called out on it and only cried satire when the post went viral. Freesus did not have "satire" in his bio on Monday, but did on Tuesday.

Meanwhile, the same outlet that had to be shamed into issuing a satire label to on a clearly satirical story from The Babylon Bee about CNN spinning the news in a washing machine it previously labeled as false, willingly plays along.