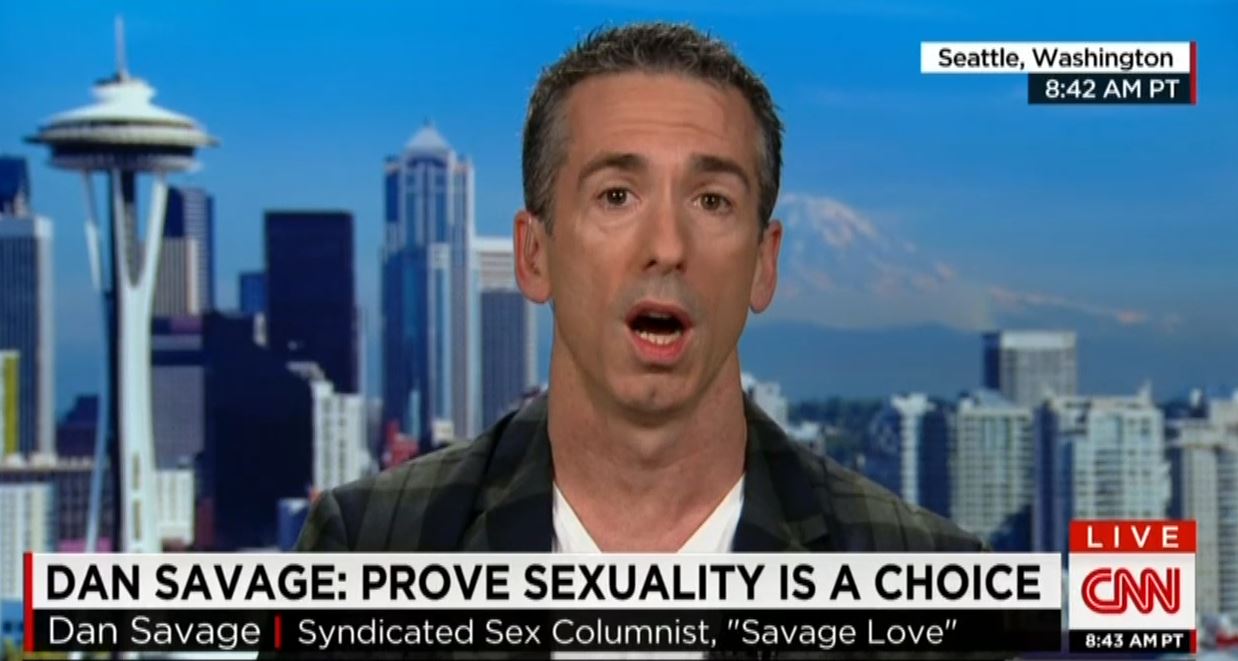 Catholic leaders joined the Media Research Center (MRC), the Family Research Council (FRC), and the American Family Association (AFA) in a national campaign to educate the public about a Disney ABC sitcom pilot based on the life of anti-religious bigot Dan Savage. MRC and FRC sent a letter to Ben Sherwood, president of Disney/ABC Television Group, nearly four weeks ago urging him to pull the plug on the new show but have still not received a response.

Dan Savage’s vulgarity and violent rhetoric is well-documented. Savage is unapologetic in his promotion of filth masquerading as humor. His new show, "The Real O'Neals" is a platform he does not deserve. Even so, Disney ABC continues to remain silent as pro-family and pro-faith organizations call for it to reconsider its decision to promote this bigoted, hate-filled man.

“Disney ABC continues to circle the wagon and ignore the anti-religious bigot in their midst,” said MRC President Brent Bozell. “We will not relent in exposing Dan Savage for the vile hate he spews at conservatives, Catholics, and evangelicals. Disney ABC’s silence is shameful.”

"The most incredibly vicious anti-Catholic in America is Dan Savage. What he has said about Catholicism is so vile that Disney would never air it. To offer this malicious bigot a show is the height of irresponsibility."

“Unfortunately, Dan Savage's public persona is completely opposite to wholesome role model for kids.  His crass and even vitriolic disparaging of certain faiths and family values, and his aggressive agenda of promoting dangerous, deviant sexual experimentation couldn't have escaped Disney's or ABC's attention.  To see the network that brought us Cinderella endorse a man like this should outrage every American who cares about our children and our culture.”

"Dan Savage recently made a lewd smear against Pope John Paul II on Twitter in which he accused him of being a child molester. This is sadly typical of Dan Savage, who has a history of making X-rated personal attacks. Why would Disney hire this man for one of their TV shows? And why would advertisers want to be associated with such vile attacks on Catholics?"

"These thugs will 'savage' Catholics for their religious beliefs, and then put on fundraisers to advocate tolerance for any other minority.  This hits a new low for an industry that has sunk to the depths of depravity and religious hatred.

The two halves of the First Amendment fit together.  Those who claim free speech for the news and entertainment media, yet freely discriminate against Catholics, forget that there is no authentic free speech if there is no freedom of religion.  The First Amendment will not stand in a society that has no respect for its citizens' religious beliefs."

"Dan Savage has said some of the most vile and disgusting things about Christians that have ever been heard in America. He has publicly encouraged sexual violence against them and said they were deserving of death by torture. The fact that ABC would voluntarily work with such an extreme person to promote his immoral, hateful agenda is problematic in the extreme."

Co-Founder and Editor-in-Chief of LifeSiteNews

"Dan Savage is called a pro-gay activist but what I know of him is that he is against just about everything, including the family. Disney will likely feel its decision to base a show on his life where it hurts the most - in its deep pockets."

“Dan Savage’s hatred for those with whom he disagrees is a matter of public record, as are his many vile taunts and fantasies. If ABC does give him a platform from which to further spread his venom, then let this be the end of the claim that ‘neutral’ media such as ABC just want to promote tolerance. Anti-Christian bigotry is absolutely alright with ABC, so let’s do away with the pretense that this is just about entertainment.”

"The idea that the vulgar, insulting, outrageous Dan Savage would rate consideration for a sitcom on ABC Disney only confirms the obvious fact that, culturally, our nation is in a moral free fall.  What other reason could there be for partnering with a man who has spent much of his adult life insulting God, His followers, and His Church?

How low will society go before courageous Americans stand up and say enough? The time is now to raise our voices. Join us in opposing this most recent embrace of media bigotry that has no place in a civilized nation."

“Disney sold out years ago, but to produce a show based on the life of a radical bigot like Dan Savage is a slap in the face to Catholics across the country.  The Lepanto Institute is more than happy to join in the campaign against this program.  Anti-Family propaganda like this must never see the light of day.”

"If ABC thinks Dan Savage is a worthwhile subject for a biography, one hopes, and I’m sure Mr. Savage would agree, that it be faithful to the truth. Of course a biography that is true to Mr. Savage’s life, with his endless stream of vile, profanity-laced, anti-religious hate speech would not pass FCC regulations, not to mention being an affront to common decency. But I doubt common decency is a factor in ABC’s calculations."

There's nothing funny about ABC's outrageous decision to invest in a "sitcom" about an anti-Christian, anti-Catholic bigot. This decision should tell Disney ABC shareholders and advertisers that the network is in desperate need of new management.

Dan Savage has made numerous comments about conservatives, evangelicals, and Catholics that offend basic standards of decency. They include:

*Ms. Muntean and Mr. Viguerie were not on the initial statement but signed on after its publication.