Liberal billionaire Tom Steyer has had a really bad year.

He failed to get other left-wing donors to join his crusade to make climate change the No. 1 election issue. Then he wasted nearly $75 million backing liberal candidates. Four out of the seven politicians he and his NextGen Climate Action group backed lost. And the few races where liberals won owed little or nothing to Steyer’s bizarre and sometimes inaccurate campaign ads.

Now Steyer is gearing up to try to influence the 2016 presidential election, but he may need to reexamine his strategy first. The Wall Street Journal argued that curbing carbon emissions, Steyer’s pet issue, “will be a campaign issue in two years,” but this doesn’t mean that Steyer was successful in trying to push that this year. Even liberal media outlets agreed that Steyer’s recent attempts had gone “mostly belly-up.” For good reason.

With the final election of 2014 ending in another GOP victory on Dec. 6 and the 2016 presidential race already begun, Steyer seems unwilling to admit those failures. “One thing is clear: we’ve made our mark, and this pivotal year for climate politics has given our efforts an unprecedented leg up,” he said in a post-election statement. He added “this is only the beginning” and vowed to “put climate on the ballot for our presidential candidates in 2016.” The media seem willing largely willing to excuse him, with Politico on Dec. 8, listing Steyer among possible replacements for retiring liberal Sen. Barbara Boxer, D-Calif.

But, 2014 isn’t done making him look bad. In a particularly cruel twist, the run-off for Louisiana’s Senate seat showcases two candidates, both who support the KXL pipeline. That’s the very project NextGen seeks to halt, despite the fact that it would create thousands of American jobs. The very project NextGen calls “a bad deal for the United States.”

One big reason for Steyer’s failure was his oddball campaign against conservative billionaires Charles and David Koch. NextGen spent $4,532,460 running ads accusing the Koch brothers of being “polluters,” “playing dirty” and of being from “out of state.” That last one was an especially odd criticism coming from another out-of-state billionaire. None of the seven political races Steyer focused on this year were in his home state of California.

That didn’t matter. Steyer’s anti-Koch efforts mirrored those of Senate Majority Leader Harry Reid and other Hill Democrats. One of the NextGen ads didn’t even bother with accusations, choosing instead to flash a picture of the Koch brothers while ominous music played.

But the Koch brothers weren’t the biggest spenders in 2014. Steyer was.

Steyer spent $74 million on the 2014 election cycle, making him by far the single biggest political contributor for the entire year. Former New York City mayor Michael Bloomberg, another liberal, came in second at $40 million, according to Politico. That was only slightly more than half Steyer’s massive total.

Yet, without seeing an irony in doing so, Steyer continued to run ads insisting that a vote against conservative candidates was a vote against the Koch brothers. Far from being just another concerned citizen, Steyer’s own political contributions were a lot more self-serving than he’d like to admit.

Thirty-nine percent of all NextGen Climate ads were about the Kochs. NextGen ran ads specifically trying to tie candidates to the Koch brothers an incredible 7,637 times out of 19,515 televised political ads.

Overall, NextGen made 35 ads this year and seven (one-fifth) tried to demonize the candidates by tying them to the Koch brothers.

Steyer did manage to fund three candidates who won their races, but his influence in those races was negligible at best.

The local Fox affiliate in Detroit called Terri Lynn Land’s Michigan senatorial campaign “lackluster” on Oct. 13, noting that even conservatives were unhappy with her. During the two weeks leading up to the election, even the National Republican Senatorial Committee decided to pull the plug on $800,000 worth of TV ads for Land. A Real Clear Politics poll showed Land’s numbers were down before Steyer even intervened.

In fact, out of the grand total of $30.8 million that Steyer spent on specific races (not all of that was on televised ads), 73 percent went to candidates who ended up losing their races, according to OpenSecrets.

Every one of the ads NextGen ran against Land tied her to the Kochs. These  4,444 ads cost Steyer’s Political Action Committee $2,865,560, and only ran from Sept. 3 to Sept. 27. Lands’ poll numbers did drop 2.5 points during this time, but this was part of an overall downward trajectory and doesn’t seem to have been affected by the NextGen Climate.

Even National Review dismissed Land’s election as a predictable loss. “How bad was she?” NRO writer John J. Miller asked on Nov. 4. “In recent days, she lost the endorsement of the Detroit News, whose editorial page routinely backs Republicans. In other words, she walked into a room of right-leaning editorialists — and performed so badly that they felt compelled to back her opponent. This takes a special kind of lousy.”

Land wasn’t the only candidate Steyer opposed, but who apparently lost without his help.

In Massachusetts, Steyer ran anti-Scott Brown adds from Aug. 22 to Sept. 14, when Brown was behind in the polls. But Brown’s best poll numbers cam later in October, after Steyer had already stopped his television advertising in that state. Although Brown ended up losing his race, his poll numbers showed a fairly steady improvement from the end of June all the way up until the election.

The same trend can be seen in the polls for outgoing Pennsylvania Gov. Tom Corbett’s campaign. Although Corbett lost by a significantly larger margin than Brown, Corbett’s poll numbers showed a steady improvement from late July onward. Steyer’s anti-Corbett ads ran from July 10 to July 20.

Steyer also spent much less on the Brown and Corbett campaigns. NextGen committed $133,150 to fund its ad campaign against Brown and $1,737,170 against Corbett.

The Washington Post noted on Nov. 3 that Steyer’s ad campaign didn’t seem to be influencing the election much -- at least not according to national polling data available at the time.

Of the seven races that Steyer focused on, only three targeted candidates actually lost their races. It would be hard to call any of those Steyer victories and the media were appropriately critical. Even the establishment liberal outlet Politico observed on Nov. 5 that Steyer’s “Political investments mostly went belly-up Tuesday.”

It wasn’t the campaign’s only failure.

Steyer has had trouble getting other liberal mega-donors on board with his climate crusade. NextGen Climate had initially claimed Steyer would raise $50 million from outside donors and match it with $50 million of his own money. However, when when it became obvious this goal would not be met by the election, Steyer denied knowing where that number came from.

NextGen only managed to raise $2 million from non-Steyer sources, $48 million less than promised.

Steyer told The Los Angeles Times on Oct. 12, that he blamed “somebody I don't know who has never owned up to it." However, the Times added that “[a]ctually, Steyer's political strategists suggested the sum, both in public and private.”

That wasn’t the only campaign problem.

NextGen has faced criticism, even from the left, for political ads Politico aptly dubbed “bizarre.” The Post criticized a NextGen ad targeting the Keystone Pipeline, giving it “four Pinocchios,” the most scathing falsehood rating that the Post can give to something. (The explanation of the Pinocchio rating system is here.)

The ad claimed the Keystone Pipeline, rather than benefiting U.S. and Canadian interests, would primarily benefit China at the expense of the U.S. The hit job even included an out-of-context quote from Alexander Pourbaix, the Executive Vice-President and President of Development for TransCanada.

According to the Post, that ad in particular “does not even meet the minimal standards for such political attack ads. It relies on speculation, not facts, to make insinuations and assertions not justified by the reality.” The Post, which is neither conservative nor in favor of the pipeline, called the ad “especially disturbing, even by the standards of attack ads.”

Yet, Steyer defended that same ad to the Los Angeles Times on Oct. 12, arguing "I have not seen anything ... that I did not think was supportable.” (Ellipses theirs).

Steyer’s vendetta against the Kochs didn’t stop there. Not content with the typical, anti-business liberal spiel, he even came up with new things to blame on Charles and David Koch. One of the commercials that Steyer’s political nonprofit, NextGen Climate, posted on its YouTube channel (although it didn’t run on television) implied that the Koch brothers were part of the same group of people who “told us the world was flat, and insisted it was the center of the universe. 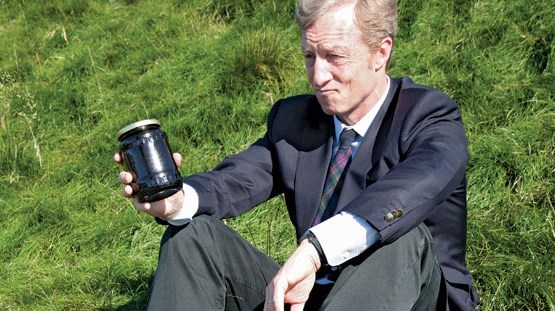 Despite his failures, the media have been fond of Steyer ever since he burst onto the scene.

The Washington Post proudly declared Steyer an “environmental hero” on June 9. This is typical of the type of coverage that Steyer and NextGen have received from the media.

Although they all they all talked about Steyer, The Washington Post, New York Times, LA Times and USA Today all portrayed Steyer in a positive light. As far as the papers are concerned, Steyer is a poster boy for a worthy cause. The New York Times even devoted an entire feature story to visiting Steyer and touring his cattle ranch, in November, 2013.

Steyer isn’t alone in his fascination with the Koch brothers, ABC, CBS and NBC are also quick to paint them as villains. Just in the time since Steyer joined his brother in founding The Center for the Next Generation on Sept. 16, 2011, ABC, CBS and NBC have done just one story mentioning Steyer and his funding, and even then it was a mere 34 words in a story about the Koch brothers.

Charles and David Koch got the once-over from all three networks. There were 22 mentions of the Kochs funding conservative groups or politicians in that time. That’s a 22-1 ratio.

All information regarding the cost and airing of NextGen political commercials was supplied by Kantar Media. For media analysis, MRC Business looked at records of The Washington Post, New York Times, Wall Street Journal, USA Today and LA Times articles since Jan. 1, 2011, and at Politico articles from the past year for context.