This past Thanksgiving weekend, with all the stories going on in the country today, one seems to have topped the list: an unknown GOP staffer decided to voice her negative opinion about the Obama daughters after they were pictured during the White House turkey pardon ceremony…on her Facebook page. Yep.  That’s the story. 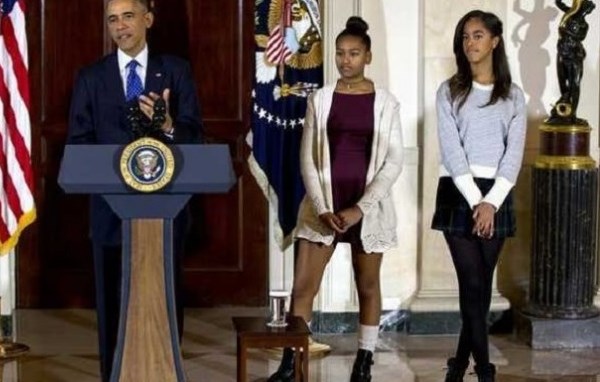 Dear Sasha and Malia, I get you’re both in those awful teen years, but you’re a part of the First Family, try showing a little class. At least respect the part you play. Then again your mother and father don’t respect their positions very much, or the nation for that matter, so I’m guessing you’re coming up a little short in the ‘good role model’ department. Nevertheless, stretch yourself. Rise to the occasion. Act like being in the White House matters to you. Dress like you deserve respect, not a spot at a bar. And certainly don’t make faces during televised public events.

You could imagine the backlash Lauten got from the online world – and a few “reputable” news organizations. (Start with The Huffington Post.) Apparently, there are even Malia and Sasha partisans that were calling for Lauten to be fired from her job.  Really? What if we were to go around inspecting every Democratic communications director for whichever Democrat they work for – are their personal Facebook posts fair game too?

In fact, Lauten faced so much backlash she felt compelled to issue an apology for something she posted on her own Facebook page:

"I reacted to an article and quickly judged the two young ladies in a way that I would never have wanted to be judged myself as a teenager," she said. "After many hours of prayer, talking to my parents and re-reading my words online, I can see more clearly how hurtful my words were. Please know that these judgmental feelings truly have no place in my heart. Furthermore, I'd like to apologize to all of those who I have hurt and offended with my words, and pledge to learn and grow (and I assure you I have) from this experience."

For those who insist presidential or vice presidential children (or those of potential candidates) are off limits and should oblige by those wishes – does that mean it’s still ok to give them a free pass when they are older or being trotted out for show and tell to help with a candidacy?  For instance, back in 2008, when David Shuster remarked that Chelsea Clinton was being “pimped out” by her mother, MRC’s Tim Graham wrote the following:

”As the blogosphere picks up with talk of David Shuster's remark about "pimped out" Chelsea Clinton, something should be made clear. The media spent the 1990s using Chelsea and Gore kids to improve the public image of the Clintons and the Gores. When someone (like Al Gore III) misbehaved by speeding at 90 MPH, the media covered up. But they used young Al to burnish old Al for all those high school football games he attended as a devoted dad. See this NRO piece from 2000. It's still happening now, with Chelsea used routinely to warm up Hillary's ice-queen image. Last August, Brent Bozell wrote up a particularly embarrassing piece from Jodi Kantor in The New York Times, treating Chelsea Clinton as, well, a nearly silent American Idol. "We’re told that 'people seem delighted just to watch her lips move and hear sound emerge." As Kantor described her Jewish boyfriend, she identifies Chelsea as "a Christmas-cookie-baking, churchgoing Methodist.'”

Shuster was either rude or displaying his affinity for hip-hop lingo by suggesting Chelsea was "pimped out." But there is no question that the liberal media has enthusiastically joined the Clintons in puffing up Chelsea as someone who makes her parents look more appealing -- almost to the point where you're expecting them to paint cartoon songbirds around her head.

There's one more, a 2001 Bozell column right after the media played up the 19-year-old Bush twins being arrested for drinking in Austin, Bush's Kids vs. Gore's Kids.

In addition to what the Bush twins endured when it came to criticism from the media, who can forget the Palin kids (here, here, here, and here…just to name a few)? Of course, both parties have had their share of mudslinging when it comes to criticizing children of politicians, but more often than not it’s those with an “R” after their name (or like this post proves – any association with the Republican Party) that are often forced into publicly apologizing.

In “An Open Letter to Liz Lauten” at the Daily Kos, the writer "Background Noyze" asserts Lauten said they dressed like “sluts”, was “slut shaming,” or threw out suggestions of racism. Ironically, if the open letter did anything, it showed the writer as being the epitome of an online bully and doing the same, if not worse, than what Lauten did by linking to personal photos, insulting her appearance, making disparaging remarks about her character and job, and insinuating racism (that’s apparently the new “norm” these days).

Here are a few passages from the vile piece:

It must feel awful, moving from a position as New Media Director for the RNC during a presidential campaign down to Communications Director for the House Republicans and then getting demoted to a lowly staff position for a lowly representative.  That must be so  disheartening.  The strain is starting to show. I hate to be the one to tell you this, but if you are going to leave the house, put on slacks, a skirt, a dress ... anything but your hospital gown! Cinching in the waist isn't fooling anyone, dear.  You look like .... a cheap bar slut.  Is that really what you want people to say? In this town?

If I was you, I know one thing I would be praying over  -- I'd be praying my BOSS, Rep. Stephen Fincher (R-TN) was super busy this holiday weekend and didn't notice you rolled up on his property and peed all over the carpet.  If anyone knew you had posted that vile attack on those innocent children in his name, they might think he actually approved what you said.  Of course, if he keeps you on his payroll folks might talk.  They might say stuff like

"Rep. Stephen Fincher is a closet racist who lets his staffers trashtalk so he can keep his hands clean but still give a wink and a nod to his klavern constituents."

Don't worry, I'm not saying anyone actually is saying that about him -- at least not yet.  But you know how people get when they get to talking.  Oh that reminds me, I was talking to Liz Trotta, today.  She wanted to thank you, too.  After your suggesting Sasha (age 13) and Malia (age 15) were uppity ho's, no one is going to remember her tasteless joke.

I understand you probably thought the girls were older than they look.  After all, if you stand next to them they are so big. So threatening.  So black. Just like their mother, right?  It's a wonder they don't have kids of their own, right?  I know you know they don't, but we all know what black girls go to bars for, right? Nudge, nudge, wink, wink. Say no more, eh?”

Whether you agree with that statement is your personal opinion, but the fact of the matter is this - it was stated on Lauten’s personal Facebook page.  Think for a minute, anything and everything someone posts on their personal Facebook page, and simply by being associated with a political party can make news all on its own.  If you think family and friends airing dirty laundry on their Facebook page was bad, this post proves it can be taken to a whole new level in politics.