CNN's Cuomo Rips Santorum on 'Tolerance:' 'Why Aren't You More Like Your Pope?' 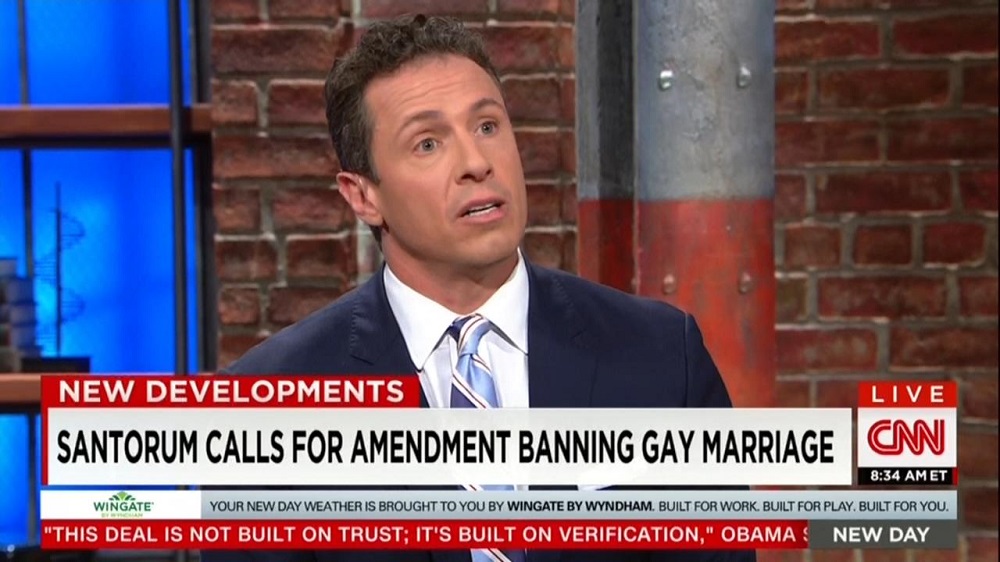 CNN's Chris Cuomo tried to shame Rick Santorum on Tuesday's New Day over his opposition to same-sex marriage. Cuomo indicated that Santorum wasn't in line with Pope Francis on LGBT issues: "Your Pope says tolerance is the message of Catholicism, when asked about gay marriage and LGBT existence within humanity. He says, 'Who am I to judge?' That doesn't work for you. You say you want an amendment that keeps marriage between a man and a woman. Why aren't you more like your pope?" [video below]

When the Republican presidential candidate corrected the anchor's distortion of the pontiff's stance on marriage, Cuomo followed up by asking, "With all the things that we're facing as a culture, why would you invest the energy in a constitutional amendment to define marriage as between a man and a woman?"

The journalist unsurprisingly kept to his long pattern of acting like a LGBT activist with a Republican/conservative guest. Cuomo brought up the issue of same-sex "marriage" near the end of the interview, and interrupted Santorum's initial answer by repeating part of his point:

CHRIS CUOMO: Your Pope says tolerance is the message of Catholicism, when asked about gay marriage and LGBT existence within humanity. He says, 'Who am I to judge?' That doesn't work for you. You say you want an amendment that keeps marriage between a man and a woman. Why aren't you more like your pope?

SANTORUM: Well, I don't think the Pope would support a – the Pope doesn't support a change in the definition of marriage. I mean, he's been perfectly clear about that. I think – I think-

CUOMO: He said, 'Who am I to judge?' Focus on love; focus on tolerance-

SANTORUM: Well, that's not what he said. He's been – he's been very – he's been very, very, very clear about standing for the definition of marriage. I don't think there's any question about that. What he's talking about – and he's absolutely right – is that we need to respect the dignity of all human life, and everybody to – to – you know, we are all broken. We are all sinners. We all make mistakes. And we have to – we have to continue to love and support those – you know, who fall short of the mark, including me. So I think the Pope is simply stating something that is crystal clear in the Christian faith, which is to – to love the sinner, and condemn the sin – but to stand for the truth of what the institution of marriage is. And I think the Pope has been very clear about that.

Of course, Pope Francis has defended the Catholic Church's teaching on marriage being between one man and woman.

The CNN anchor then shifted to the former Pennsylvania senator's support of a constitutional amendment defining marriage as being between a man and a woman, and why social conservatives have supposedly ignored the issue of divorce:

CUOMO: With all the things that we're facing as a culture, why would you invest the energy in a constitutional amendment to define marriage as between a man and a woman?

SANTORUM: What I've said – and I've been very clear about this too, Chris – that the most important thing I would do as president is, really, to try to strengthen the nuclear family. I wrote a book about this last year called 'Blue Collar Conservatives,' and I spent a lot of time in that book talking about the – how the family has broken down. There's a recent book that came out – maybe you even had him on your program. Robert Putnam wrote a book just a couple of months ago called 'Our Kids' and....it's a very important book. And as well as other studies that have been done, both from the left and the right, and they all talk about the fundamental problem – the hollowing out of the middle of this country – is the breakdown of the American family and-

CUOMO: And that's divorce, though. That is not-

SANTORUM: Oh, it – it's everything. It's divorce. It's out of wedlock children. I mean-

CUOMO: But none of the Christian resistance to gay marriage ever talks about divorce. Divorce is the big – is the big 'X' factor.

SANTORUM: No, no – excuse me, I think if you look at my record – I wrote a book ten years ago called, 'It Takes a Family,' and I talked about this long before the debate on gay marriage started. And so, I don't – you may say that about others. You can't say that about me. I've talked about the breakdown of the family for 20 years, and talked about how important – you know, reknitting this family together, and reducing the out of wedlock birthrate; strengthening the institution of marriage, so children have the best opportunity to – to rise in society. So I see the issue of gay marriage as really a continuation of the breakdown of marriage over a long period of time.

Earlier in the segment, Cuomo also defended the Obama administration over its new nuclear agreement with Iran:

SANTORUM: Well, because, number one, it empowers the Iranians. The Iranians came to the negotiating table, if you will, in a very weakened state; and they're going to leave with billions – hundreds of billions of dollars; the ability to project terror, which they are – the chief sponsor of terror. We've legitimized them. We've given them legitimacy in the international community – something that they deeply wanted here – and they've done basically nothing in exchange for that. They come out of this a much, much stronger and more – I believe, more virulent state with very, very few responsibilities to – in fact, nothing in this deal curbs their terror. There's nothing that says that they have to cease any type of terrorist activities. So, in fact, they set that completely aside, focused solely on the nuclear part of it. And again, there's a lot of questions, as we've heard, as to whether this deal is going to do anything to really curb their intentions.

CUOMO: Well, because it was about the nuclear program, it's somewhat unfair to say it does nothing for their terrorism activities, because that wasn't the subject at the table. The years of sanctions that have been in place against Iran have allowed them to build this massive infrastructure that they have right now. Where is your confidence that sanctions – more sanctions – would make a difference, given that they've done all this under sanctions?

SANTORUM: Well, they – number one, they don't have a nuclear weapon right now, so that's one thing that we can say that sanctions, very well, may have certainly limited their ability to get that. They – yes, they have built a lot of other things, but the reason they came to the table is because their economy was in shambles; their political situation was very tenuous; and they came because sanctions were having a huge impact.

CUOMO: The U.N. embargoes that have to do with weapons are in place. They will be kept five years – eight years, depending on what type of military you're talking about. You knew you had to trade time for change. You knew that was going to be an aspect. Nothing was going to be permanent. And the idea of ratcheting up the sanctions – the conventional wisdom is the United States could not do that alone. You need the international partners – specifically, the tenuous ones, Russia and China – and they weren't willing to do that anymore. So how would you make that happen?

SANTORUM: Well, you certainly have plenty of examples – and continuing examples – of Iran being a – a bad actor in the region....And so, you can continue to make the case to the international community that this chief sponsor of terror in the world – chief sponsor of Syria, another pariah state in – in the region; a chief supporter of Hamas and Hezbollah and other – other terrorist groups in the region, that – that they are – that they are ones that need to be – continue to be contained. And what we've done with this agreement is brought Iran into the world community, and given them legitimacy that they didn't have; and have given them, more importantly, money. And so, let's just see.

I mean, you're going to say, well, what would – what would you do when you come into office? And let's just see what – what the next year and a half portends with now a much stronger Iranian state. I mean, that's what's going to come out of this negotiation – Iran will be stronger; they'll be financially in better shape; they'll be able to project that terror more – more virulently. That's why the Israelis are as upset as they are, because we've now neutered the Israelis. We've taken the Israelis completely out of – out of – out of the picture in the ability for them to stop the Iranians from developing a weapon.

CUOMO: ...You have mentioned that if you were president, you would back out of this deal. Now, that's met with a lot of resistance, because this idea that you could walk away from the table, as the United States, and not pay a huge price for that with your international partners, is a little naive. So do you really think you could just, as president, walk away from this situation?

SANTORUM: As I said, Chris, that we would have a year – a year and a half of this deal being in effect. And I have absolutely no doubt that this tiger is not – is changing its stripes because of this deal. This tiger is – has taken advantage of the United States, gotten exactly what they wanted out of this deal, so they can continue to do what they've been doing for the last – you know, 30 years-

CUOMO: Right, but assuming that you don't have a violation, you had said, well, if I were president, I'd walk away. Do you think that would be good for the international partnerships that are so important?

SANTORUM: Here my assumption, and...it's 100 percent led by certainly: there will be violations. The Iranians have never kept a deal – never. They're not going to keep this deal. They're going to – they're going to do everything they can to stall, delay, cheat; and they – and there's no doubt in my mind that they will continue to export terrorism. There will be plenty of opportunity for the next president of the United States to make a compelling case to the world that this deal...is fraudulent.

CUOMO: Well, also, though, you would want to also assess the controls that are in place for – if there is such a violation that you're predicting – that the sanctions would come in. And then, you would have international cooperation. This deal allows for that mechanism as well.