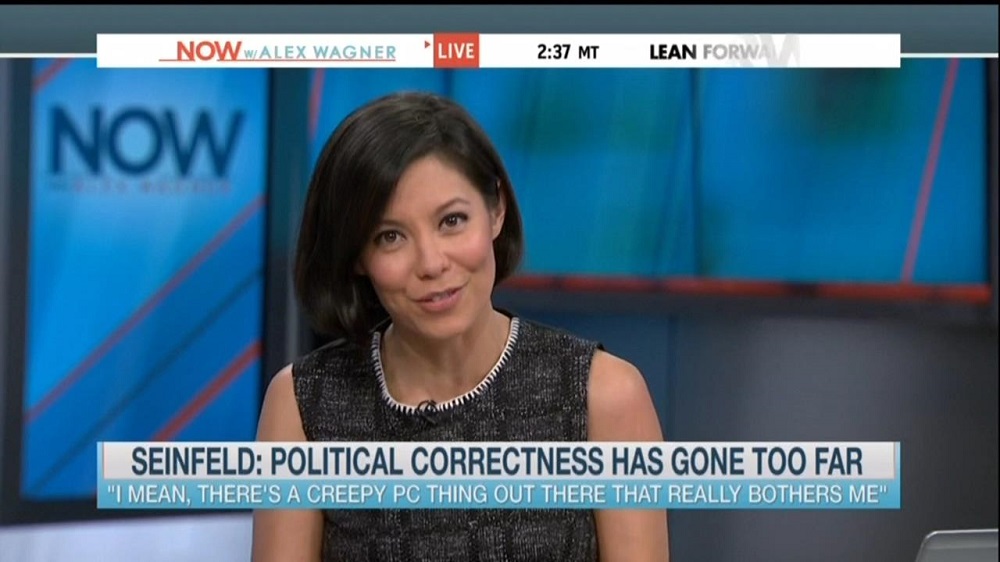 Alex Wagner, along with her three liberal guests, ripped Jerry Seinfeld on her MSNBC program on Wednesday, for his blast at "creepy" political correctness. Wagner hinted that Seinfeld had "fallen behind the times." New York magazine's Annie Lowrey mocked his critique: "I kind of roll my eyes at Jerry Seinfeld. You know, he's a billionaire – like I don't feel sorry for him if people don't laugh hard enough at his jokes." [video below]

Bloomberg Politics's Dave Weigel remarked that "no one wants to think they've stopped being cool or they stopped being relevant – or especially, that they – that they're now a bigot because they believe something they've always believed." Weigel also echoed Lowrey's class warfare jab at Seinfeld: "There is no down side; there is no social pressure backlash for Jerry Seinfeld here. He still has all of his cars – the gigantic fleet of cars." MSNBC's Dorian Warren attacked the comedian with his own left-leaning talking points: "I think it's so cheap and easy to be able to insult people who are socially marginalized....you're afraid to be criticized, because you can't come up with funny jokes that don't insult people."

Wagner led into the panel discussion with the clip of Seinfeld's "creepy PC' line from NBC's Late Night With Seth Meyers. After using her "fallen behind the times" hint, the host turned to Lowrey for her take on the issue. Before launching her attack, the liberal guest actually acknowledged that "PC culture" goes too far at times:

ANNIE LOWERY, NEW YORK MAGAZINE: So, you know, I really think that – that PC culture owes a lot to social media, where, all of a sudden, people – in this case, college kids – can say – hey! You know, I was a young gay person – and I constantly had to hear jokes like this, and it's really not cool. And then, you can get a, kind of, social media piling-on effect. And I get that sometimes it goes too far. I get that sometimes it can be a little bit humorless.

But nonetheless, I think it's a really good thing that people, who have been marginalized and discriminated against and abused and insulted, can come forward and say, my experience is not unique; this happens to at lot of people. I think that that's been a much better thing; and it's actually sparked a really good conversation about sexism; about racism; about bias against gay and transgender and lesbian people. So, I kind of roll my eyes at Jerry Seinfeld. (Wagner laughs) You know, he's – he's a billionaire – like I don't feel sorry for him if people don't laugh hard enough at his jokes.

Wagner replied by underling that "the times are a-changing, and if you look at progress on something like gay marriage – right? If you like that, that is because people see gay people differently; and maybe, not so readily prepackaged as the butt of jokes." Predictably, Warren, who is a professor at Columbia University, ripped Seinfeld:

DORIAN WARREN, MSNBC HOST, SHIFT's "NERDING OUT": I'm with Annie on this. Boo-hoo, Jerry Seinfeld! How about stopping lazy, and write some, smart funny jokes? How about that?

WAGNER: Right. Well, there is that-

WARREN: That don't insult – I think it's so cheap and easy to be able to insult people who are socially marginalized. Come up with some jokes – I think of George Carlin; I think of Richard Pryor; I think of Dave Chappelle, who came up – who found the humor in making fun of these social categories; of offering a critique of-

WAGNER: I think Seinfeld would argue that he's in the spirit of Richard Pryor, for example; that he's crossing that threshold-

WAGNER: (laughs) Between what society thinks is acceptable and what is funny.

Weigel then compared the stand-up comedian to the number of college professors who have recently decried the political correctness of their students. He continued by seconding Lowrey's wealth-based attack on Seinfeld:

DAVE WEIGEL, BLOOMBERG POLITICS: Right. No one wants to think they've stopped being cool or they stopped being relevant – or especially, that they – that they're now a bigot because they believe something they've always believed. I don't think Jerry Seinfeld is a great spokesman for that mindset – right? I think the college professor – and there are an increasing number who all get opinion page take-outs whenever this happens to them – the college professors that feel marginalized by their students – they're saying something the students find it offensive – they feel triggered – that's a different issue. There is no down side; there is no social pressure backlash for Jerry Seinfeld here. He still has all of his cars – the gigantic fleet of cars – and he – he's not – who would – which college campus was booking him? Maybe, if you, like, cut into the Harvard endowment, you could afford him, but I don't think that many-

WAGNER: Well, he's saying that comedians in general don't want to have to deal with the PC police that is prevalent on college campuses-

The Bloomberg Politics journalist later added, "And if Jerry Seinfeld is banished from society, then I'll feel differently about it. But for now, he's fine." Wagner replied, "I think he's made $820 million in his career. So, the ban – the exile will be comfortable."

It should be pointed out that later in the segment, Wagner's panelists all celebrated how the Italian husband of actress Zoe Saldana took her last name. Lowrey gushed over how it was "really, really sweet" and "lovely" for him to make this move. Warren replied, "If I could find a wife, I'd be more than happy to take her name or to hyphenate my name....If men are committed to breaking down traditional structures of patriarchy – which is where the whole name thing comes from, in terms of the marriage contract, etc. – I think we should be at least willing to hyphenate....I think it's an awesome thing!"

Weigel responded by referencing the previous subject: "People should not be Jerry Seinfelds about this. They should accept – anything you can do to break the norms; to be respectful of your partner, I don't see why anyone would have a problem with that. So, good for him."