On NBC, Seinfeld Slams 'Creepy PC Thing' 'Moving the Lines In' on Comedy 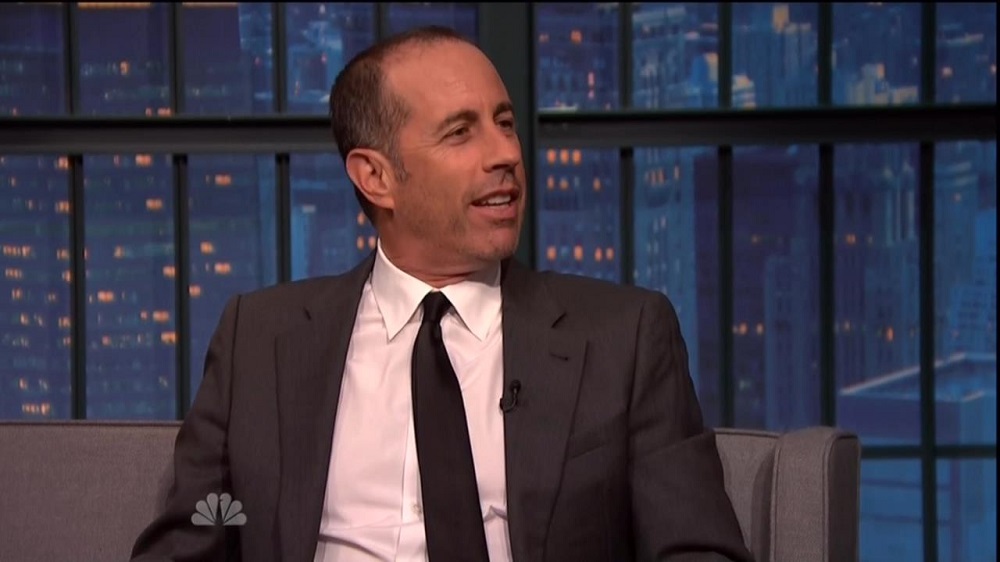 Jerry Seinfeld blasted political correctness on the early Wednesday edition of NBC's Late Night With Seth Meyers. Seinfeld cited how he recently got a negative reaction to a "gay French king" joke: "I can imagine a time when people say, 'Well, that's offensive to suggest that a gay person moves their hands in a flourishing motion, and you now need to apologize.' I mean, there's a creepy PC thing out there that really bothers me." [video below]

The comedian's remarks came days after he contended that political correctness, especially on college campuses, is ruining comedy. Just before Seinfeld targeted this form of left-wing censorship, host Seth Meyers brought up the controversy surrounding the July 2008 cover of The Atlantic that depicted Michelle Obama as a Black Panther and Barack Obama as a Muslim with the magazine's editor, David Remnick. Remnick explained that "comedy should often...test the limits. Louie C.K. did it on Saturday Night Live just recently – and press the boundaries of taste and decorum." He also asserted that the cover "came at a time when a sizeable percentage of the country thought that Barack Obama was a Muslim, and Michelle Obama was a gun-toting Black Panther!"

Meyers then expressed his agreement with his guest's "test the limits" thought about comedy, and added that "there are more people now who will let you know if they think you went over the line than ever before." He turned to Seinfeld for his take on the issue. The stand-up comedian replied by launching his attack on political correctness.

This isn't the first time that Seinfeld has attacked the over-sensitivity of the left. Back in February 2014, the TV star targeted the "anti-comedy" of "PC nonsense" during an interview on CBS This Morning.

The transcript of the relevant portion of the Jerry Seinfeld/David Remnick segment from NBC's Late Night With Seth Meyers on early Wednesday morning:

JERRY SEINFELD: That was really funny-

MEYERS: It was great-

REMNICK: Yeah. The ADL – the Anti-Defamation League – appreciated it less.

REMNICK So I had a little bit of a fight with Abe Foxman at the ADL. But, you know, it worked out. It's okay.

MEYERS: Are you, with your magazine, when you, sort of, court these sort of-

REMNICK: But here's the thing about controversy: you should – you should – if you're only –  putting on the cover, bowls of fruit or – you know, quiet summer houses or something like that, and never going too far enough – which is what comedy should often do – is go too far enough and test the limits. Louie C.K. did it on Saturday Night Live just recently, and – and press the boundaries of taste and decorum and – you know, and push politicians.

I mean, this – this cover came at a time when a sizeable percentage of the country thought that Barack Obama was a Muslim – as if there was anything wrong with it-

MEYERS: 'Not that there's anything wrong with that' is your line.

REMNICK: I use what I can get. (Meyers laughs) And, you know, it made a big – made a big splash.

MEYERS: Well, I will say comedy – it's interesting. Comedy is – I do think is – you know, supposed to push the line – push those lines of the medium. There are more people now who will let you know if they think you went over the line than ever before.

MEYERS: I mean, you have to feel the same way about comedy.

SEINFELD: Yeah – but they keep moving the lines in for no reason.

SEINFELD: I – I do this joke about the way people need to justify their cell phone. I need to have it with me because – people are so important. You know, well, they don't seem very important the way you scroll through them like a gay French king (makes swooping motion) – you know, just- (Meyers and audience laugh) Well-

I mean, we can't even – I can imagine a time – and this is a serious thing – I can imagine a time when people say, 'Well, that's offensive to suggest that a gay person moves their hands in a flourishing motion, and you now need to apologize.' (audience laughs) I mean, there's a creepy PC thing out there that really bothers me.