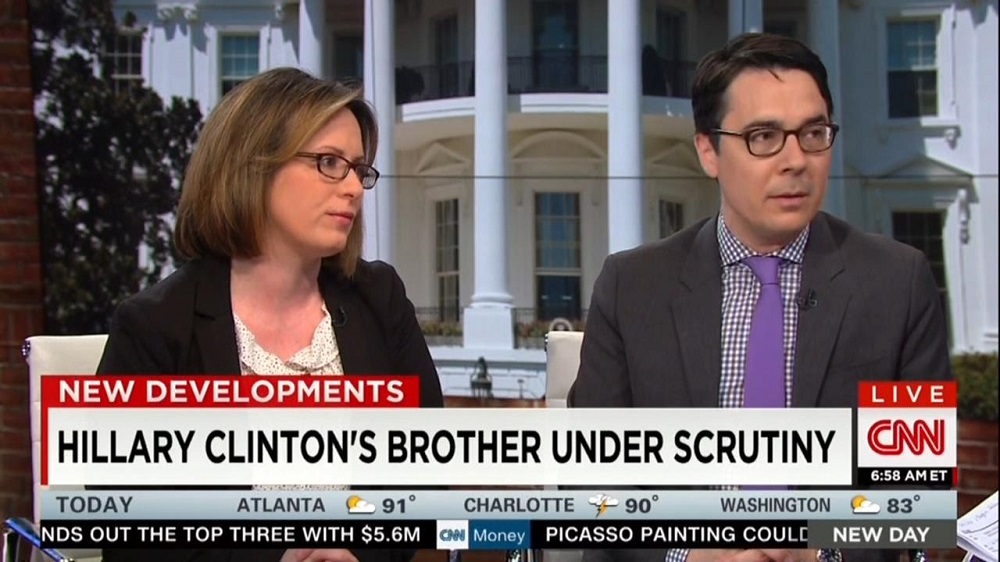 On Monday's New Day on CNN, the New Yorker's Ryan Lizza asserted that there was no wrongdoing in former President Bill Clinton helping his brother-in-law, Tony Rodham, get a job with former DNC head Terry McAuliffe (who's now the governor of Virginia): "Bill Clinton was not in office. It doesn't seem to conflict with her [Hillary Clinton's] job as secretary of state. If Bill Clinton helped out the brother-in-law, I don't see that as a scandal." [video below]

Anchor Alisyn Camerota agreed with Lizza: "Don't we all help our brothers-in law? Is there anything wrong with this?" Maggie Haberman of the New York Times seconded their takes, even though she acknowledged that it was problematic: "To me, if there is any issue...I think that people forgive – you help your family...I think that the more you see things of – you know, I went to the foundation for help. Now, the foundation says there's no evidence of anything that he said, but...it's not great."

Camerota introduced the Rodham issue by noting that "the allegation is that Hillary Clinton's younger brother has parlayed his relationship with Bill and Hillary Clinton throughout the years to come up with some sometimes dubious business deals for himself." Haberman pointed out her liberal newspaper's reporting on it. The CNN anchor then read an excerpt from correspondent Steve Eder's write-up before asking her "don't we all help out brothers-in-law" question. Lizza then chimed in with his "don't see that as a scandal" claim:

MAGGIE HABERMAN, PRESIDENTIAL CAMPAIGN CORRESPONDENT, THE NEW YORK TIMES: You just laid it out pretty well right there. I mean, look, there has been an ongoing focus on the brothers Rodham – right? Tony and Hugh Rodham, Hillary Clinton's brothers – and there is a sense of, sort of, a ne'er-do-well or hanging on or looking for help.

What was striking about the story that my colleague Steve Eder did is there are these court transcripts where Tony Rodham openly says, I leaned on my brother-in-law to get – help me. I went through the Clinton Foundation. I mean, he says this. That type of stuff, I think, is very unhelpful. That you are going to see in attack mailers. You're going to see that potentially in ads. That, I think is-

ALISYN CAMEROTA: We have a little excerpt.  Let me just quickly read an excerpt from this article in the New York Times. It says here: 'When Mr. Rodham was short on cash in 2010, Mr. Clinton helped him get a job for $72,000 a year raising investments in GreenTech Automotive, an electric car company then owned by Terry McAuliffe – an old friend of Mr. Clinton's, and now, the Governor of Virginia.'

Don't we all help our brothers-in law? Is there anything wrong with this?

RYAN LIZZA, WASHINGTON CORRESPONDENT, THE NEW YORKER: I was going to say, I'm not-

HABERMAN: Right – and I agree with you – yes-

CHRIS CUOMO: What's wrong with that?

LIZZA: I was going to say, what's wrong with that? I mean-

HABERMAN: That, I think, people will forgive, helping a family member-

LIZZA: He's not a – he's not a politician – right? Bill Clinton was not in office. It doesn't seem to conflict with her job as secretary of state. If Bill Clinton helped out the brother-in-law, I don't see that as a – as a scandal.

It should be pointed out that in 2013, the Department of Homeland Security investigated GreenTech Automotive to see if they got special treatment from federal government officials. The DHS inspector general's report, which was released earlier in 2015, found that McAuliffe "received special treatment on behalf of his electric-car company from a top official at the Department of Homeland Security."

After the New Yorker correspondent made a joke at co-anchor Chris Cuomo's expense, Haberman repeated her "people will forgive" statement. Cuomo then played up how the Clintons' opponents have "overreached" with past allegations of scandal. The New York Times correspondent seconded the CNN journalist's assessment:

LIZZA: ...It does seem, in politics, little brothers are sort of there to embarrass their older- (Lizza, Camerota, and Haberman laugh)

CUOMO: Easy! Easy! You are on my show, for God's sake, Ryan. And it hurts because it's true.

LIZZA: I was going to say, present company excluded-

CUOMO: He plays to the risk and the reward of chasing after this-

CUOMO: The risk is, though, that you overreach – that him getting a job – oh, you want us to look into everybody who you've helped? You know, that's the overreach here. That's the concern. That's why they have to stay specific – and where their proof is – is going to decide how bad it is for the Clintons.

HABERMAN: It's always the issue with the Clintons, though, is people do tend to overreach; and then, that ends up favoring them, to some extent – at least their supporters feel like they're getting hit needlessly. And that's, sort of, their sweet spot politically.

Earlier in the segment, the panel discussed the ongoing Clinton Foundation scandal. Lizza and Haberman were much tougher on the Clintons, in comparison to the Tony Rodham issue. Cuomo also boosted a point made by Clinton ally Lanny Davis:

CHRIS CUOMO: Three years, they didn't report all of the things they were supposed to report about nations donating to the foundation. Can it still be, Maggie, a bookkeeping oversight that will be corrected?

MAGGIE HABERMAN, PRESIDENTIAL CAMPAIGN CORRESPONDENT, THE NEW YORK TIMES: You just pointed to the exact problem. Their defense on everything has been, we are transparent; we put it on the website; everybody can see it; you can find what you need. And then, we keep hearing about, actually, this wasn't there, and this wasn't there, and this wasn't there. And so, at a certain point, they are going to, I think, get pressed to do greater disclosures, or to be more open, or to invite people in to look at their books, but I don't think the status quo is going to hold.

CAMEROTA: But Ryan, I mean, the fact that they didn't put it on their website – doesn't that suggest that they weren't altogether comfortable with the funds that they were getting from foreign contributors?

RYAN LIZZA, WASHINGTON CORRESPONDENT, THE NEW YORKER: Yeah. Look, this was not an issue that the press just invented, right? As a condition of Hillary Clinton becoming secretary of state, the Obama administration and Hillary Clinton said – okay, we have this foundation; we have some issues here; this could be a potential conflict of interest. So here's how we're going to solve that: we're going to have this full transparency. So the fact that they – that it was just full of holes – one, the Clintons themselves were not doing a good job keeping track of this; and two, I think it raises questions about the Obama administration. Why weren't they enforcing this agreement? Why weren't they going back to the Clinton Foundation and saying – hey, we had a deal here?

CAMEROTA: But that would mean that they knew about it.

LIZZA: Well, that would – it would mean that there was some auditing by the Clinton – excuse me, the Obama administration saying, remember, as a condition of you coming in as secretary of state, we had this deal. We want to make sure that you are fully providing the – compliant.

CUOMO: But I think right now – they'll still – they stay pretty focused on the Clintons, in terms of – you know, who is to blame, if anything went wrong here?

You know, Lanny Davis came on the show – and, of course, he was Bill's – you know, general counsel, so, I mean, you expect him to be – but he says there's no proof. Where is the proof that somebody got something from the administration – from the U.S., from one of the departments – in exchange for what they gave?

HABERMAN: He's not wrong about. That is a fair point, and that has been the response to this Peter Schweizer book is – look, you've shown a lot of quid, but not so much pro quo. The problem, I think for her, and I think for them in general, is that the secondary answer you get repeatedly, as we were talking about with these disclosures, is this was sloppiness; this was a mismanaged thing. That is going to be, I think, the argument Republicans are going to start using –  is not corruption, but about a competence question – and that's the problem-

CUOMO: It's also the standard of proof. You know, where is the proof – is when Alisyn is trying to bust me in criminal court – you know? But if it's about politics and trust, it's about 'semblance' of impropriety. Something that smells bad is what you're supposed to avoid.

LIZZA: And look, if you're saying disclosure is the antiseptic here, then you have to – your disclosure has to be perfect, right?

LIZZA: And it's going to make it very hard for Hillary Clinton, if she's the nominee, to press a case against a Republican candidate, when big money and politics is going to be a big issue, and she's going to – she's going to have a problem doing that.