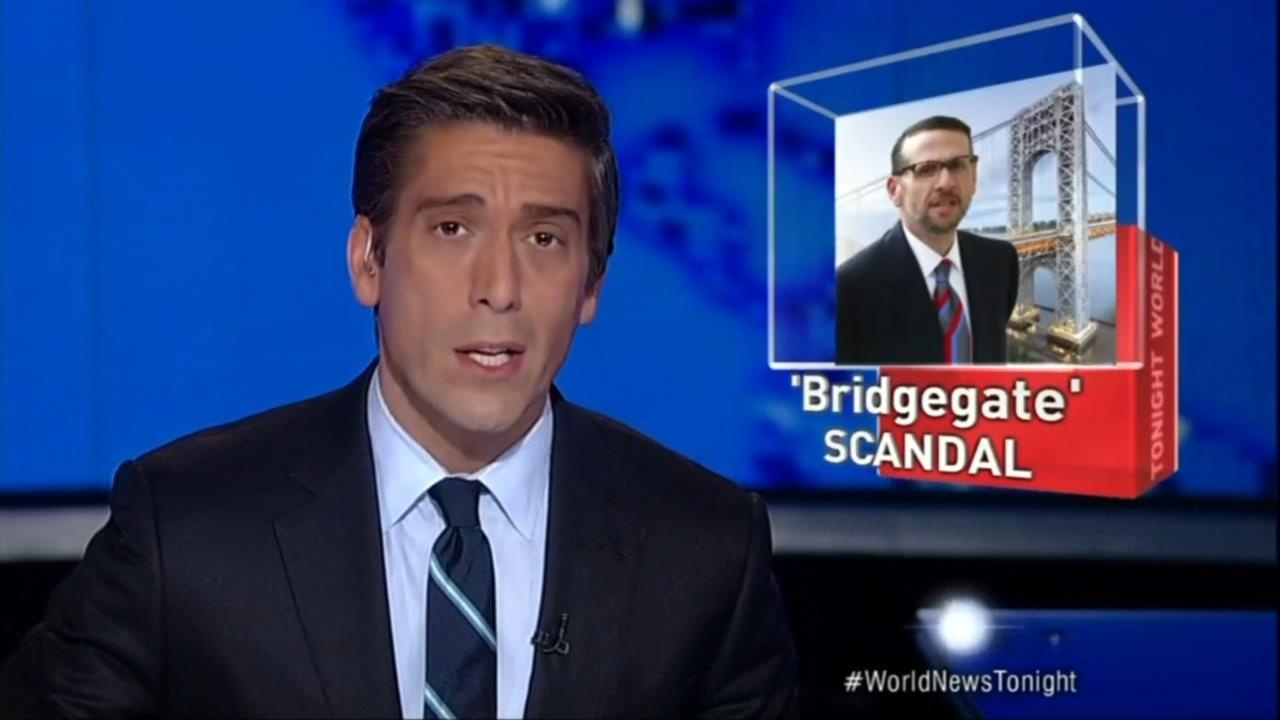 ABC and NBC's evening newscasts on Friday both spotlighted how a former New Jersey government official pled guilty as a result of Bridgegate, and two other former employees were indicted for the scandal. On World News Tonight, ABC's Ron Claiborne touted how "this scandal has taken a tremendous toll on Governor [Chris] Christie's presidential prospects," even after pointing out how "nowhere in today's indictments is Governor Christie said to have known about the alleged plot." [video below]

Stephanie Gosk also underlined on NBC Nightly News that "damage to a possible presidential campaign may be unavoidable" for Christie. By contrast, both programs continued their blackout on the Clinton Foundation scandal. The last time ABC and NBC's evening newscasts covered the issue was on their April 23, 2014 editions.

Claiborne pointed out that "David Wildstein, one of those former Christie appointees, and a former high school classmate of the governor's, pleaded guilty." He inserted his "tremendous toll" line near the end of his report, and highlighted the New Jersey governor's political affiliation:

RON CLAIBORNE (voice-over): Today, federal prosecutors declared that this iconic bridge became that traffic nightmare because of a conspiracy by three former top appointees of New Jersey Governor Chris Christie – accusing them of orchestrating four days of misery for hundreds of thousands of commuters.

UNIDENTIFIED FEMALE DISPATCHER: 10-4. We're getting calls from irate motorists. Paramedics were notified – possible head injury – she's been waiting for over an hour.

CLAIBORNE: This morning, David Wildstein, one of those former Christie appointees, and a former high school classmate of the governor's, pleaded guilty.

PAUL FISHMAN, U.S. ATTORNEY FOR THE DISTRICT OF NEW JERSEY (from press conference): He and others orchestrated a deliberate and illegal scheme to punish Mark Sokolich, the mayor of Fort Lee, for not endorsing Governor Christie's reelection.

CLAIBORNE: Wildstein said he conspired with two top Christie appointees – including deputy chief of staff Bridget Kelly, accused of sending him that infamous e-mail, 'Time for some traffic problems in Fort Lee.' Both appointees said they are not guilty.

BRIDGET KELLY, FORMER AIDE TO GOV. CHRIS CHRISTIE (from press conference): With regard to the charges that have been brought against me, let me make something very clear: I am not guilty of these charges.

CLAIBORNE: But nowhere in today's indictments is Governor Christie said to have known about the alleged plot. On Twitter, he responded, 'Today's charges make clear that what I've said from day one is true. I had no knowledge or involvement in the planning or execution of this act.'

CLAIBORNE (on-camera): But David, this scandal has taken a tremendous toll on Governor Christie's presidential prospects. Before, he was considered a top contender for the 2016 Republican nomination. David – no more.

MUIR: All right. Ron Claiborne at the G.W. not far from here – Ron, thank you.

On NBC Nightly News, anchor Lester Holt previewed Gosk's report by noting the "new developments in the bridge scandal swirling around New Jersey Governor Chris Christie. Three former allies charged with intentionally triggering a traffic nightmare." Holt introduced the segment by hyping the "story roaring back into the headlines tonight – the so-called Bridgegate scandal involving the office of New Jersey Governor Chris Christie." He added that "while it has not been linked directly to Christie, it has cast a shadow over his potential run for president."

Unlike Claiborne, Gosk never gave Governor Christie's Republican affiliation. However, she boosted an unsubstantiated allegation against the politician by the lawyer of the former official who pled guilty. She also played a soundbite from NBC journalist Chuck Todd, who seconded the correspondent's "damage to a possible presidential campaign may be unavoidable" contention:

PAUL FISHMAN, U.S. ATTORNEY (from press conference): A deliberate and illegal scheme to reduce the access lanes from three to one, in order to punish Mark Sokolich, the mayor of Fort Lee, for not endorsing Governor Christie's re-election.

GOSK: Wildstein pled guilty to two counts of conspiracy as part of a plea deal – while his alleged co-conspirators, Christie's former deputy chief of staff Bridget Anne Kelly and former Port Authority Director Bill Baroni, were indicted on nine federal charges. The indictments allege the trio concocted the plan, waited for the first day of school to maximize disruption, and then repeatedly ignored the mayor's concerns about public safety. Wildstein says he got the order from Kelly in an e-mail: 'Time for some traffic problems in Fort Lee.'

BRIDGET KELLY (from press conference): David Wildstein is a liar.

GOSK: Kelly breaking her silence for the first time in 16 months – both she and Baroni deny the charges.

KELLY: I never ordered or conspired with David Wildstein to close or realign lanes at the bridge for any reason. Additionally, for the indictment to suggest that I was the only person in the governor's office who was aware of the George Washington Bridge issue is ludicrous.

GOSK: Governor Christie responded in a statement: 'Today's charges make clear that what I've said from day one is true. I had no knowledge or involvement in the planning or execution of this act.'

Christie spent the morning in Virginia with business leaders. Damage to a possible presidential campaign may be unavoidable.

CHUCK TODD: I think this makes a presidential campaign, which has already been an uphill battle – the climb is now steeper today.

ALAN ZEGAS, DAVID WILDSTEIN'S ATTORNEY (from press conference): Mr. Christie knew of the lane closures while they were occurring, and evidence exists to establish that.

GOSK: Federal prosecutors say based on the evidence they have gathered during their extensive investigation, they are not going to charge anyone else. Stephanie Gosk, NBC News, Newark, New Jersey.