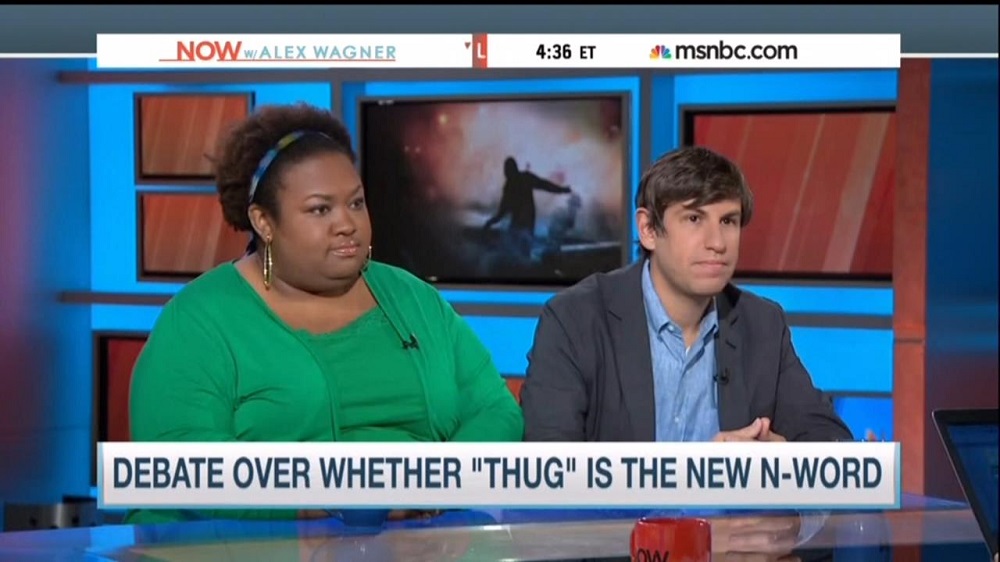 Alex Wagner and her two left-wing panelists on the Wednesday edition of her MSNBC program – Salon's Brittney Cooper and The Nation's Ari Berman – likened the use of the word "thug" to describe the rioters and looters in Baltimore, Maryland on Monday to a notorious racial slur against blacks. Wagner played up how "there are folks, like CNN's Erin Burnett, who don't understand why it's offensive; and why some people are saying the 'T' word is the new 'N' word." [video below]

Cooper claimed that "thug" is "rooted in a racialized understanding of black people." Berman also asserted that "the use of the word 'thug' has been used to delegitimize the actions of many because of the actions of a few...the 'black live matter' movement has been a peaceful movement....And so, by making it seem like everyone 'black lives matter' is now a thug, you're trying to delegitimize a movement and mis-characterize it."

Wagner first played up how "usage of the word 'thug' spiked on Monday – appearing in roughly 50,000 Tweets. Today, Baltimore's mayor [Stephanie Rawlings-Blake] apologized for using the term, attributing her use of it to – quote, 'frustration.' The word's ubiquity has, this week, led to re-examination of the origins of the word 'thug,' and the debate over its racial connotations." She continued by playing clips of Burnett's recent confrontation with a city councilman in Baltimore over the word, as well NFL player Richard Sherman's contention that "thug" is "the accepted way of calling somebody the 'N' word nowadays." Wagner also zeroed in on how "it was, perhaps, surprising to see President Obama yesterday settling on 'thug' as his chosen term," and how he declined to walk back his use of the word.

The MSNBC host then turned to Cooper and Berman and asked the Salon contributor's take on the issue. Cooper replied by blasting the use of "thug," and continued by spouting many of the far-left's talking points on race:

ALEX WAGNER: ...To the use of the word itself, Brittney – I mean, I think there are folks like CNN's Erin Burnett who don't understand why it's offensive, and why some people are saying the 'T' word is the new 'N' word. Give us your take.

BRITTNEY COOPER, SALON CONTRIBUTOR: Sure. It's rooted in a racialized understanding of black people. So, for instance, no one is calling the police who put this kid in a van and snapped his spine and crushed his voicebox 'thugs' – right? They're only applying it to acts of violence against property – right? Acts of – and sure, acts of harassment, sure – acts of anger. But when are we going to have a language to talk about the systemic violence that white folks do in the name of anti-blackness and white supremacy in this country? We don't have a language for that.

So this becomes a way for there to be a procession of both white people in the media who are unsympathetic; and also, the, sort of, respectable middle-class or upper-class black people who are saying, we want to maintain law and order. We want to make a distinction between us and the criminals and the thugs – the low – the lower elements of black people. We don't want to be associated with them.

Wagner followed up by quoting leftist commentator Derrick Clifton, who claimed that "'thug' is used to describe black perpetrators of violence – very rarely white. He says, 'If the word thug were used to reference all forms of violent action, that would be one thing. But this word has become reserved for black people, regardless of whether or not they are engaged in unrest or criminal activity.'" Berman responded with his point about the supposed targeting of the "black lives matter" movement. He also claimed that little has been done to fix poverty in minority communities – despite hundreds of billions of dollars in government spending:

ARI BERMAN, CONTRIBUTING WRITER, THE NATION: Yeah – absolutely – and in this context, the use of the word 'thug' has been used to delegitimize the actions of many because of the actions of a few. The fact is, the 'black live matter' movement has been a peaceful movement. It's been a non-violent movement. And so, by making it seem like everyone 'black lives matter' is now a thug, you're trying to delegitimize a movement and mis-characterize it.

The second thing I would say about that is there's a lot of echoes between the 1960s and today, in terms of, if you look at the Kerner Commission in the 1960s, after the rioting in Watts [California] – and all across the country after Martin Luther King's death – they found – you know, two societies – white and black; separate and unequal. And instead of really trying to understand urban poverty and do something about it, we heard the language of law and order; of states' rights; of the white backlash. And so, what we've seen is, essentially, a 40-year disinvestment in these communities, because of how we've characterized these elements and – making everything seem dangerous and thuggish, instead of really trying to fix the problem.

Of course, these commentators are overlooking the term "jack-booted thug," which is regularly used to attack the excessive use of force by the government in general and law enforcement specifically.

Wagner then returned to her critique of President Obama from the left for his use of the "thug" term: "It is as much a black/white issue as it is a black/black issue. I mean, Stephanie Rawlings-Blake is a black woman; Barack Obama is half black, half white, but is identified as a black president; and they're using the word 'thug.' Now, Stephanie Rawlings-Blake has since...apologized. The President seems, if we're to believe the White House press secretary, defiantly, sort of, doubling down on, this is how I describe looters and people who perpetrate violence." Cooper replied, in part, by hinting that the rioting was somehow a proper response to the killing of Freddie Grey by the Baltimore police, along with the previous allegation of police misconduct towards the black community:

COOPER: ...I don't like the narrative that says that this is about the violent actions of a few. My question is, where are folks supposed to put these decades and decades of rage, after being mistreated by people who were sworn to protect them – right? The police officers have a higher responsibility to protect people in our communities, because they have state power backing their right to use lethal force....But this – this idea that – that we're lauding peace – right? But we're not asking police officers – who are also called peace officers – why they don't de-escalate situations; why they don't keep the peace. But then, we expect citizens to deal with harassment; and then, keep the peace and to never act out.

I'm not saying that violence is always productive, but I am saying that I do respect black people as human beings, and part of what that means is understanding that rage is a legitimate and reasonable response to being mistreated repeatedly by those in power.

Later in the segment, the host brief acknowledged that, perhaps, there was an overreaction to the use of "thug," but then returned to her left-of-center talking points on race/poverty. Berman retorted that terminology is important, and continued with a critique of the media coverage of the Baltimore riots:

WAGNER: I guess I worry that – when we get – and maybe, this segment is guilty of it – when we get fixated on the word – right? We sort of become this society that deals in semantics and not change. So we stop calling people of color 'colored' – and we start calling certain areas 'urban,' instead of black neighborhoods – and we all sort of use this different language – but we never actually get to the root of the problem, which is institutional bias and systemic failure for certain communities in this country.

WAGNER: And that's why this is important-

Wagner also went after new Attorney General Loretta Lynch for her reaction to the situation. Cooper seconded the MSNBC personality's point, and then returned to her attempt to justify the unrest:

WAGNER: Loretta Lynch, A.G. – her first public statement is, 'I condemn the senseless acts of violence by some individuals in Baltimore that have resulted in harm to law enforcement officers, destruction of property, and a shattering of peace in the city of Baltimore.' It would have been nice if she had mentioned Freddie Gray.

COOPER: Freddie Gray – that's right. You know, I'm just waiting on a statement that comes out and says, look, we condemn a system in which people can't have trust, because young men enter vans; and then, leave with broken spines and crushed voiceboxes. And so, we see our role, as people that are denizens of state power, as restoring people's faith and confidence by making sure that we're acting in a way that is transparent and accountable – and just and humane fundamentally – and we hold ourselves to that standard. If we had folks foregrounding that kind of rhetoric, people wouldn't necessarily be in the streets as much, because they would say, you get the problem; you're foregrounding the problem.

But foregrounding the folks who are in the streets reacting – they are reacting to something that actually happened, and that's the killing of Freddie Gray by the police. And unless we can talk about that, then people are going to stay in the streets, and they should. Now, maybe they shouldn't loot everything, but frankly-

COOPER: The problem is that we keep on trying to tell people what is a reasonable response to injustice – right? So look, we can weigh in, but I want the same kind of moral outrage about the killing of this kid.