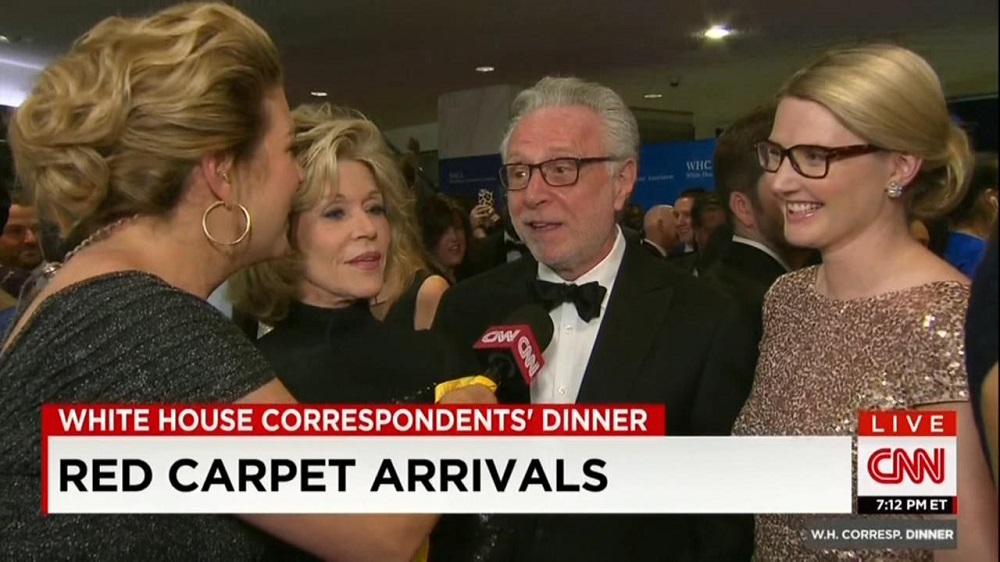 CNN's Wolf Blitzer brought liberal actress Jane Fonda and Obama administration flack Marie Harf as his guests to Saturday's White House Correspondents Dinner. Blitzer gushed over Fonda and Harf during a live interview with colleague Brianna Keilar: "It doesn't get any better than Jane Fonda....Can you believe that I'm here with Jane Fonda? And Marie Harf, acting spokeswoman for the U.S. State Department – how cool is that?" [video below]

Harf also sang the praises of the actress, and the two disclosed that they had taken "selfies" during the car ride over the dinner: "I was looking forward to meeting Jane Fonda, so that was really a dream come true....We've already done selfies in the car."

Fonda herself revealed the CNN anchor's apparent politics during an interview with Mark Halperin of Bloomberg Politics: [video below]

HALPERIN: Let's do a celebration of Blitzer-

HALPERIN: Why is Wolf so great?

The transcript of the relevant portion of Brianna Keilar's interview of Jane Fonda, Wolf Blitzer, and Marie Harf from CNN's live coverage of the White House Correspondents Dinner on Saturday:

BRIANNA KEILAR: So I have to tell you, Poppy [Harlow], that Wolf Blitzer has been in the habit of, bringing on his arms, two lovely lady guests to the White House Correspondents' Dinner here for the last couple of years. I once got to do that. That was pretty fun. This is Marie Harf – of course, a spokeswoman for the State Department; our very own Wolf Blitzer; and Jane Fonda.

So you're here as a guest of CNN. This is quite the spectacle. I'm sure you've been here before, right?

KEILAR: Oh, okay. And so, what do you think about this event; and also; how it's changed over the years since you first started coming?

KEILAR: So, the '90s was when it really started to blow up – when people would come and notable faces, like yourself, would start showing up. Do you see a difference between then and now?

FONDA: I think as – as there is in every corner of life, more emphasis on celebrity. I'm not sure that that's good, but it's what it is.

KEILAR: Wolf, you've really outdone yourselves with your guests this year.

WOLF BLITZER: Well, it doesn't get any better than Jane Fonda-

BLITZER: This is – can you believe that I'm here with Jane Fonda? And Marie Harf, acting spokeswoman for the U.S. State Department – how cool is that?

KEILAR: So, Marie, I know that this isn't exactly new to you, but this is a phenomenal event that really is second only to the inauguration. It's sort of an opportunity for Washington to get very, I guess, awestruck by celebrities. Anyone that you're looking forward to seeing?

MARIE HARF, SPOKESWOMAN, U.S. DEPARTMENT OF STATE: Well first, I was looking forward to meeting Jane Fonda, so that was really a dream come true.

FONDA: We've done some selfies in the car-