Radical LGBT activist Dan Savage plumbed new depths of lewd anti-Catholicism in a series of Twitter posts on Saturday. The hypocritical "anti-bullying" activist pointed out how a "'repair' on this statue of John Paul II makes him look like he just stuck 2 fingers in a squeaky clean altar boy." (see screen cap below)

However, Savage (who comes from a Catholic family, but is now an atheist) revealed his own ignorance, as the statue, which has its hand stretched out in blessing and currently has two fingers wrapped in plastic, is actually of a pope who died six years before John Paul II was born – Pope Saint Pius X. 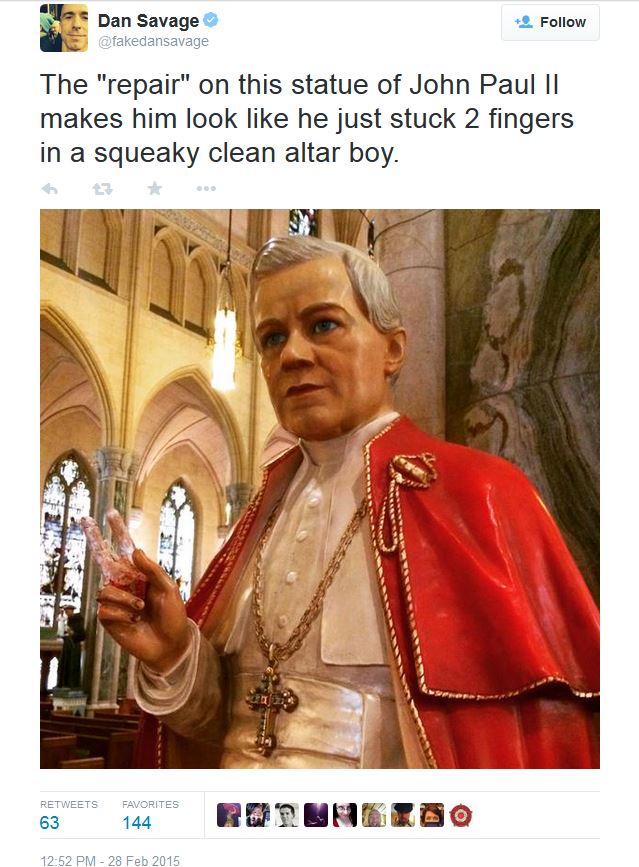 One of his Twitter followers actually pointed out the lack of resemblance between the statue and the Polish pontiff, but took his own disgusting shot at him: "That's supposed to be John Paul II? Doesn't even resemble him. Except the fingers." The far-left personality re-Tweeted this barb with his own reaction: "Ha!"

Later, Savage disclosed that he found the supposed statue of John Paul II "when I slipped into a church to light a candle and say a prayer for my mom." He also claimed to liberal writer Ana Marie Cox that his mom "would've found that pic hilarious. She had a sense of humor."

One Twitter user blasted the far-left columnist for his beyond obscene attack: "I reported you as your comment is totally offensive and inappropriate to people of faith." Savage predictably replied, "If only my church had been as quick to report all those pedophile priests to the authorities, huh?"

A third commenter advised the leftist to "Keep low profile. I think Archbishop Cordileone would bar you from communion if in SF [San Francisco] Sunday." Savage responded, "Too late. I went to 5 pm mass on Saturday." Apparently, the activist's irreligion isn't enough to prevent him from still going through the Catholic motions of his childhood – lighting candles and receiving Communion (which, from a Catholic perspective, is likely an act of sacrilege for Savage).