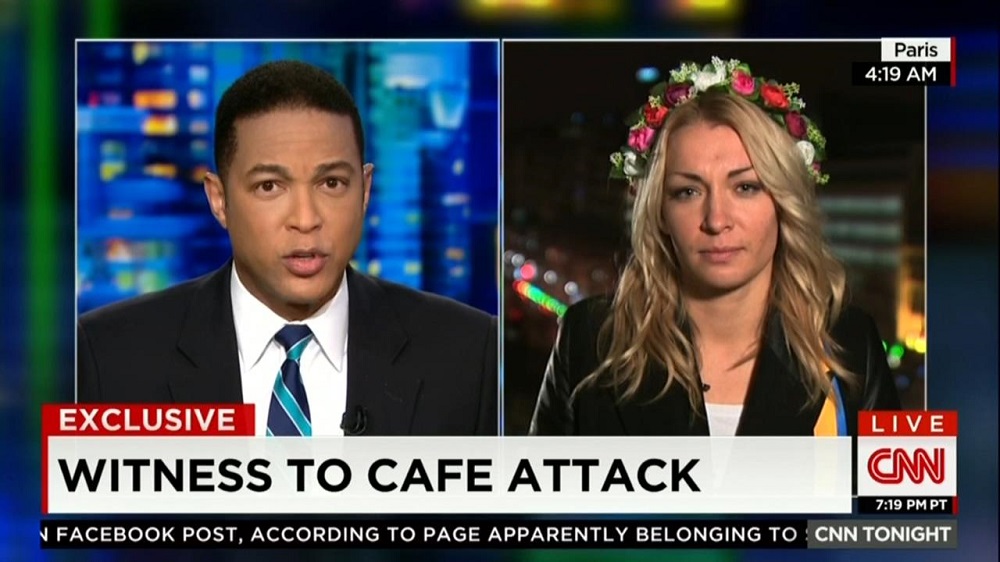 Don Lemon turned to Inna Shevchenko on Monday's CNN Tonight for her account of surviving the recent terrorist attack in Copenhagen, Denmark. However, the CNN anchor failed to point out that Shevchenko is a prominent member of the radical feminist group Femen, which has a history of targeting social conservatives in general, and especially the Catholic Church, for their opposition to same-sex "marriage." [video below]

Lemon began the segment with the Ukrainian feminist by noting that "as a gunman stormed a café in Copenhagen, my next guest was addressing a crowd at the free speech forum." After playing an audio clip of the terrorist beginning to shoot his gun as Shevchenko, the journalist merely stated that the far-left activist was "inside, and that was her speaking." An on-screen graphic also disclosed that Shevchenko was a "witness to [the] Copenhagen attack."

By contrast, NBC News reported a few days earlier that "Inna Shevchenko, the leader of Ukrainian feminist group FEMEN, tweeted that she was participating in a panel discussion at the cafe when the shooting occurred."

The CNN anchor let his guest give her eyewitness account of the attack for much of the interview:

DON LEMON: This must have been terrifying. So you stopped right away, as soon as you heard the gun shots.

INNA SHEVCHENKO, WITNESS TO COPENHAGEN ATTACK: Yes, that's right. I think that being – in a way, being ready that something like this can happen, I just – I think developing the sense of being ready and expecting that any kind of attack can take place and again. Whenever we speak about freedom of speech; whenever we laugh at the drawings; whenever we protest with our slogans in the street, we should be ready. We should accept new conditions for freedom of speech that we have today....and just being ready. I think that – well, I was the first one who reacted, because, of course, you definitely could see on [the] faces of people that nobody – nobody could expect that something like this could happen in Copenhagen – even though we all-

LEMON: So what did you do, and what did everyone else do? 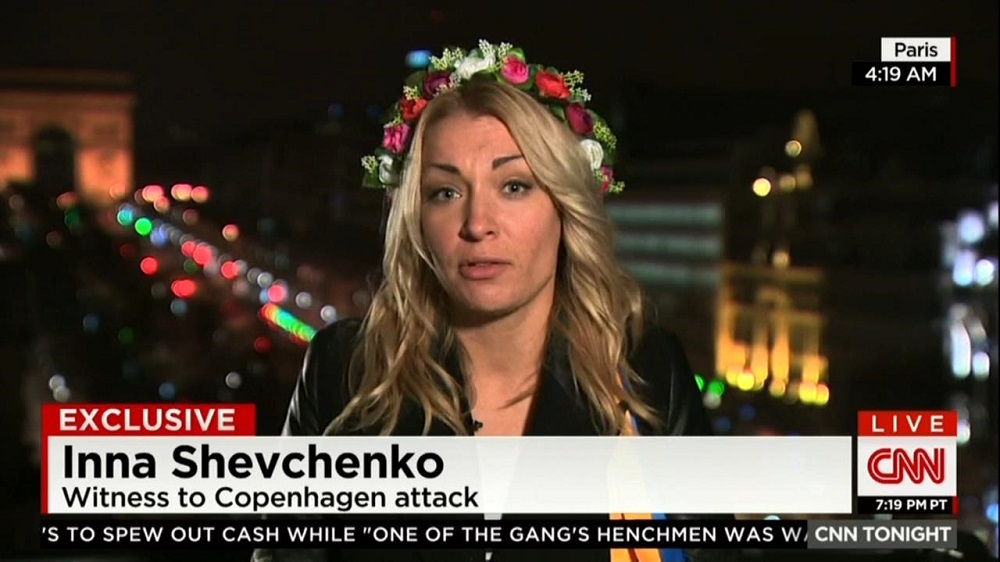 SHEVCHENKO: Well, once we heard shots, as you can hear, I stopped talking, and the first thing was – you had a thousand thoughts in your head. And you thought, is it a joke? Is it the sound of something else? Is it fireworks – or what that could be? But I immediately jumped under the stage – and I was on the floor under the stage, and people started to try to hide themselves under the tables. They were covering themselves with jackets – desperately trying to – believing that this could protect them – because the shots were continuing for so long just behind the door of the room where we were in. And then, one of the – one of the organizers of the event opened the back door of the room, and people were chaotically running out in the street and in different directions. And we were screaming, run, run, run, as the shots were continuing.
But well – the situation was really chaotic.

Near the end of the segment, Lemon pointed out that Shevchenko was "friends with the editor of Charlie Hebdo; also cartoonist Lars Vilks, who was at the event with you, and...he has been known to do depictions of the prophet Muhammad. He is now in hiding." He then asked, "Did you think that your participation – I think you spoke and said you thought that your participation may have had something to do with it. Do you think that you were the target?" But since he never disclosed his guest's affiliation/background, viewers might have been puzzled over why she might have been a target (Femen has also staged protests inside and outside of mosques in Europe). Shevchenko gave her own explanation for the attack in her answer:

SHEVCHENKO: ...Organizers informed me that...they do think that the presence of Lars Vilks; my presence; and generally, the topic of the event – that was freedom of speech, blasphemy in art...could be a reason for, sort of, provocations. And this is why they organized the security and protection. But I think that we should not just – right now, we should not ask ourselves who personally had been an attraction to this attack. What have been an attraction is (sic) our ideas. It's the ideas that we were carrying. It's the support to pluralism, and wish to celebrate freedom of speech. This is what has been attacked. Our ideas have been attacked.

Femen's history of protests have demonstrated that they actually do not believe in either pluralism or freedom of speech. In 2012, Shevchenko herself cut down a memorial cross in Kiev dedicated to the memory of the victims of Stalin. Her group also targeted the Catholic archbishop of Brussels, Andrè-Joseph Leonard, for his opposition to abortion and his defense of traditional marriage. In April 2013, topless Femen members drenched Archbishop Leonard with water and shouted him down during a lecture. Five months later, they disrupted another lecture by the cleric and threw a pie in his face.

That same year, members of the far-left organization also staged a topless protest in St. Peter's Square in Rome as then-Pope Benedict XVI was giving his weekly Angelus address. They shouted, "Homophobes, shut up!" Hypocrisy, thy name is Femen.