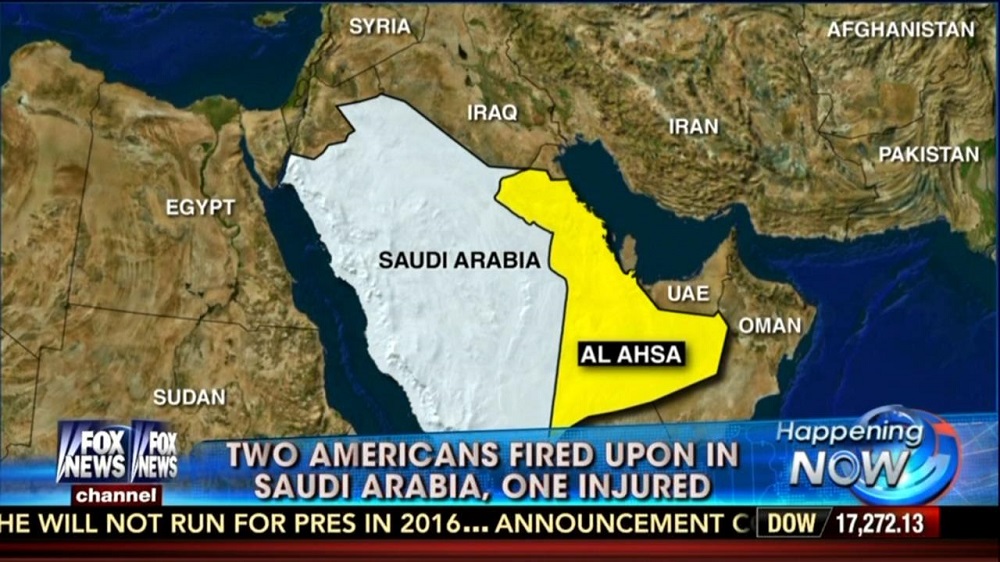 None of the Big Three networks' evening newscasts on Friday covered the shooting of an American citizen in eastern Saudi Arabia earlier in the day. A Friday item by Reuters reported that "a vehicle carrying two U.S. citizens came under fire in the Eastern Province district of al-Ahsa, one of the main centers of Saudi Arabia's minority Shi'ites."

The only mention of Saudi Arabia on ABC's World News Tonight, CBS Evening News, and NBC Nightly News came from CBS anchor Scott Pelley, who noted during a 13-second news brief that "when it comes to snow removal, it turns out that Secretary of State John Kerry has no diplomatic immunity. Kerry was fined fifty bucks for failing to shovel the walk at his Boston home. He was in Saudi Arabia." CBS Evening News also devoted 32 seconds of air time to First Lady Michele Obama's largely-positive review of Clint Eastwood's blockbuster war movie, American Sniper.

CNN's Nic Robertson and Carol Costello also devoted a full segment to the attack on Friday's CNN Newsroom. Initial reports at that time indicated that one of the Americans had been killed during the drive-by shooting:

CAROL COSTELLO: Disturbing news out of Saudi Arabia – Americans came under attack at a gas station. One American is dead; another is wounded.

CNN's Nic Robertson is on the phone. He's in Jeddah, Saudi Arabia. What more do we know about this, Nic?

NIC ROBERTSON (via telephone): Well, we're only just beginning to get the details, Carol. We first heard that two Americans were shot at; that one was injured, and the other one appeared to, at that stage, had been uninjured.

But details are continuing to come through. One Saudi press agency is reporting that the shooting took place at a gas station on the main highway that runs east from the capital of Riyadh towards – towards the, sort of, oil area of the country – in the east of the country – that the police gave chase to the attackers; exchanged gunfire with them; and one of the attackers was injured, and he is now in custody, according to the police. But the one statement that we have so far from the Saudi press agency is quoting a police spokesman, saying that one American dead and the other injured at this time. Other sources telling us that the – the person who's been injured is in stable condition at the moment, Carol.

COSTELLO: So is there an indication that the Americans were targeted because they were American?

ROBERTSON: It's not clear at this time, and the – and the details, I think, are probably going to – going to be hard to get at. It's typically hard to get clear details in Saudi Arabia. We should learn more.

But the context for this incident: in the past few months, there have been attacks on westerners here. In November, in Riyadh, the capital, a Danish worker was driving in his car home from work, and another car pulled alongside him, fired a pistol at him, and he was injured in his shoulder. Now, that was recorded on video, and posted by a group of people claiming to be associated with ISIS. You have two Americans – one was injured in a shooting in October last year. That was put down to a work-related dispute, but it left the question of was this, kind of, some – some kind of, sort of, radical Islamist type of attack? And also, within the past couple of months, another American here injured in a stabbing attack that raised the same questions. But, again, getting a – unless there's a claim of responsibility, as there was in November for the shooting of the Danish man, it's very difficult to know precisely for sure here what happened, Carol.

COSTELLO: Okay. I'll let you get back at it. Nic Robertson, reporting live from Saudi Arabia this morning, thanks so much.