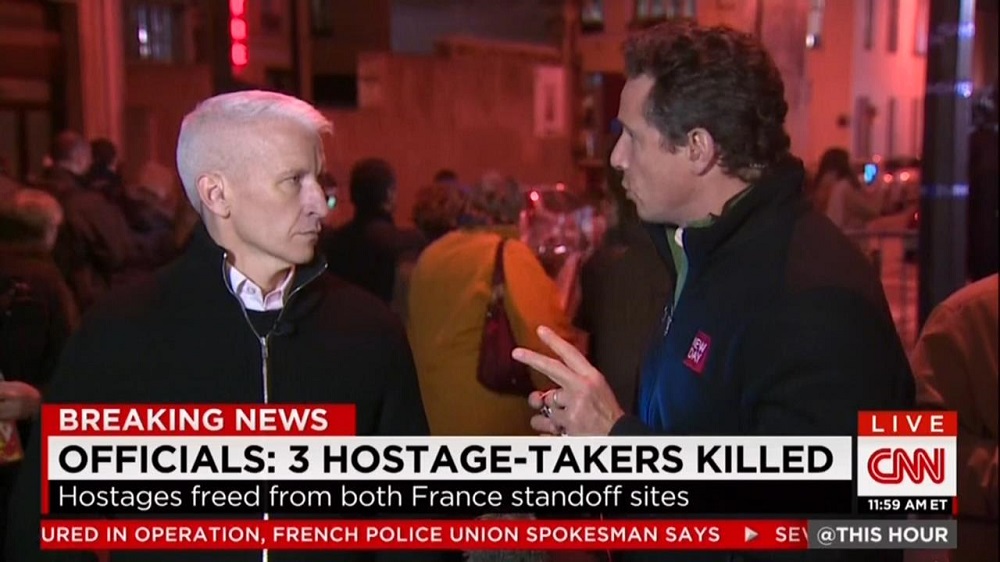 CNN's Chris Cuomo made a "colorful" gaffe on Friday's @ This Hour, as he reported live from Paris, France. Minutes after police stormed both sites where Islamists had barricaded themselves, Cuomo labeled one of the dead French terrorists "African-American." Anderson Cooper quickly corrected his colleague: "Not American – the man of African descent." Cuomo replied, "Right – African descent. Thank you. Sorry, Anderson." [video below]

The two journalists were referring to Amedy Coulibaly, who had stormed a kosher market just outside of the French capital and had taken hostages. According to a Friday report by the Washington Post's Michael Birnbaum, "French police believe he [Coulibaly] converted to radical Islam while in prison for armed robbery in 2005." The UK's Daily Telegraph also pointed out that the terrorist was a "Frenchman of Senegalese descent from Juvisy in the Essonne area outside Paris."

This wasn't the first time that a CNN anchor made this sort of gaffe. Back in November 2005, Carol Lin also used the "African-American" label during a report on riots near Paris by Islamic immigrants.

The transcript of the relevant portion of the live coverage from Friday's @ This Hour on CNN:

CHRIS CUOMO: And again, just to, kind of, bring you up to date – right now, you're looking at slightly-delayed video that we're getting from friends on French television. In the back of the picture, by the blinking lights of that small vehicle, there was someone who was being treated there. They've since been moved. You're watching that group of men moving them. You're looking at the hostages that were released from the grocery store – this happened. Was it all of them? Were any injured? We don't know the details yet. But certainly, many of them made it out okay.

We're also being told, as you see on your screen – three hostage takers dead. That calculus, as far as we know at this point, are the two brothers, who were taken out in a separate assault and a separate standoff in an industrial area; and the African-American man who'd been pictured as a suspect in a separate shooting yesterday.

ANDERSON COOPER: Not American – the man of African descent-

CUOMO: Right – African descent. Thank you. Sorry, Anderson. And who was the other person who was killed? We don't know. We also know that there have been injuries to authorities – to the SWAT members. We don't know the extent of them. But we did see, in another piece of this video, someone that appeared to be a SWAT member being triaged by some of his own-

CUOMO: So we don't know the extent of the injuries.