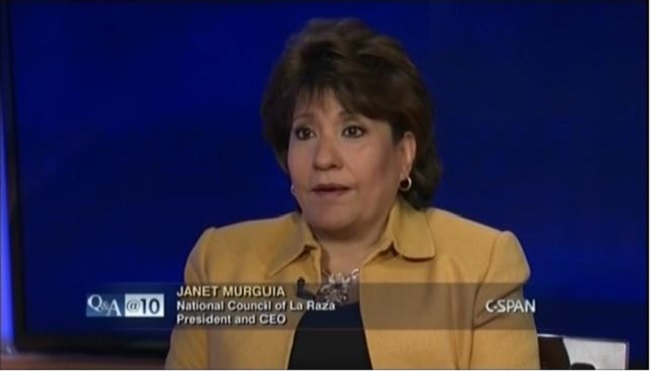 Janet Murguia, president of the liberal National Council for La Raza, took credit for Lou Dobbs's departure from CNN during a Monday interview on C-SPAN's Q&A program, and repeated a six-year-old charge that the host directed "hate speech" against Hispanics and immigrants. Murguia claimed that Dobbs forwarded a "negative mindset – but more than anything else, a pejorative mindset" about Latinos using "terms that the ADL had said were hate speech terms." [video below]

Host Brian Lamb played a 2008 clip from Dobbs's former CNN program, where the TV personality confronted Murguia for her organization's campaign against his supposed "hate speech." Dobbs vowed, "I'm going to fight you with every resource I have, because you've stepped over the line. And you're trying to tear apart the First Amendment. You can't stomach the fact that there are different opinions." Murguia replied, "Free speech is one thing; hate speech is another thing."

Lamb then asked, "Were you attacking him for hate speech?" The liberal activist, who once worked on Al Gore's 2000 presidential campaign, asserted that Dobbs was posing as a "non-biased journalist," and was using his platform on CNN to promote bigotry against Hispanics:

JANET MURGUIA, NATIONAL COUNCIL OF LA RAZA, PRESIDENT AND CEO: Well, I think it's fair to say that Lou Dobbs crossed the line when it came to presenting himself as a journalist, when in fact he was invecting an opinion, and repeating negative perceptions of Hispanics and immigrants night after night after night on his show.

And I think, as a journalist, you may have some appreciation for this, Brian. But I think it was in that time when we saw for – really, the media – the news media changing significantly – when Lou Dobbs on CNN – which is supposed to be a news program (sic) and projected themselves as a news and non-biased program – was using that banner; and yet, creating this new genre of opinion journalism. And it's fine for Lou Dobbs to have that opinion, but he can't project himself as a non-biased journalist when he's doing it – because we had done the research and had seen that he had, actually, demonstrated – you know,70 percent in – over like a six-month period – 70 percent of his news stories were on immigration, and projected negative images of immigrants and Latinos in those stories. It was clear that he had crossed the line, when it came to journalism, and was using Latinos in his stories as scapegoats for why the immigration system was broken.

And I think it's fair to say that – you know, Lou Dobbs is no longer on CNN. So, you know, I think we made a strong case for why he was not the face of a journalist in that space and with that brand. And if they wanted to use him, they needed to rebrand how they were doing their shows. And we're seeing now the emergence of many opinion-related news shows. But for Lou Dobbs to be able to say that he was a non-biased journalist, when we saw evidence to the contrary – and real damage being done, as he was, in many ways, changing the mindset that people have with the Latino community and immigrants.

We had worked with the Anti-Defamation League at the time, who had done series of research to show that certain words that Lou Dobbs was using had been used previously to create a different mindset around people – when they're referred to in terms related to animals – and he had been using the word 'hordes' and other types of – of labels around the Latino community. It creates a negative mindset – but more than anything else, a pejorative mindset – and one that, I think, actually tries to change the views that people have – when, really, we should be talking about the issues. And for us, it's one thing to about the issues, but he was doing it in a way where it really clearly was changing the perceptions that people had of Hispanics – with terms that the ADL had said were hate speech terms.