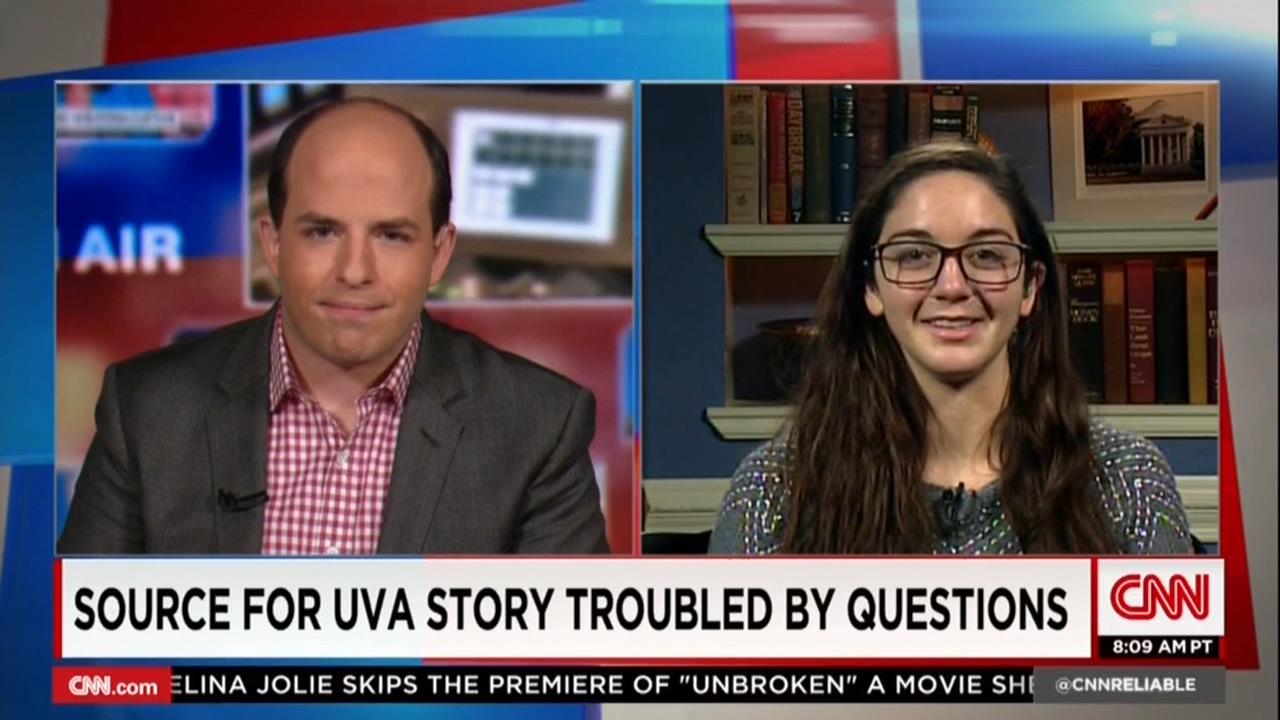 On CNN's Reliable Sources on Sunday, University of Virginia student Alex Pinkleton revealed how Rolling Stone's Sabrina Rubin Erdely, who wrote the disputed Rolling Stone story on alleged rape at the college, acted more like an "advocate" than a reporter as she interviewed people for the article. Pinkleton, a friend of the woman who made the rape accusation, asserted that Erdely "did have an agenda, and part of that agenda was showing how monstrous fraternities themselves as an institution are, and blaming the administration for a lot of the sexual assaults."

The student later stated that she "didn't like that it seems like she was looking for a story that had to be in a fraternity." When Stelter replied, "It does sound like you don't trust the reporter anymore," Pinkleton criticized Erdely's handling of the issue: [video below]

ALEX PINKLETON, FRIEND OF ALLEGED UVA ASSAULT VICTIM: I think that she should have fact checked, and I'm really upset and angry, like a lot of people are, that that didn't happen. And now, we're in a very difficult situation....

...Again, I think her intentions were good. I just think that the job was done poorly, and I am upset with that aspect of it. But I also know that she was trying to come from a point of advocacy. But as a reporter, you can't be like an advocate and support a story and listen to it and think everything is true; and then, report on it without trying to figure out if it's true.

My job as an advocate was never to question Jackie's story or question the details, because I didn't need to. But the role that she's in, as a reporter....she needed to do that.

Near the beginning of the interview, the CNN host pointed out that his guest had also been interviewed by the Washington Post about the rape allegation controversy, and had previously stood by her friend "Jackie's" account of what happened. Stelter then asked, "Do you still think it's a hundred percent true?" The student, who herself had been raped in the past, responded by underlining that "some of the details we're finding out may have some discrepancies due to trauma. That's something that comes along with being a survivor. You don't know exactly what happened that night. And I think one thing that she might have done is try to fill in the blanks herself, and might have filled it in with something that isn't entirely – quote/unquote, 'true.'"

The anchor followed up by asking, "So do you put more accountability, then, on the reporter, who decided to publish her story and not thoroughly fact check?" Pinkleton affirmed that "I definitely am not blaming Jackie at all for this situation. Sabrina [Rubin Erdely] had the power to look into the matter more – and this either would not have been published at all, or she would have noticed the inconsistencies, and went from there."

The guest gave her "agenda" answer about Erdely when Stelter asked about her personal experiences with the Rolling Stone writer:

STELTER: So what did you experience with the reporter? She was on campus for a long time. She interviewed you and a lot of other students. What were your impressions of her?

PINKLETON: I think she had her heart in the right place. She wanted to bring light to this issue – and it is a prevalent issue at UVA, and on campuses across the nation. However, she did have an agenda, and part of that agenda was showing how monstrous fraternities themselves as an institution are, and blaming the administration for a lot of the sexual assaults.

STELTER: What were some of the questions she asked you that made you feel that way?

PINKLETON: When she asked about my own assault, she kept asking – you know, did he feed you the drinks? Was he keeping tabs of the drinks that night? And he wasn't, and that's something that I had to keep saying over and over again, and I think – I felt like she wasn't satisfied with my perpetrator as someone who wasn't clearly monstrous.

Moments later, the CNN host noted that Pinkleton had been "quoted elsewhere saying that you felt like Sabrina Erdely just chose the most sensational – the most extreme story to write about." The undergraduate explained, in part, that "the types of assaults that we see on college campuses a lot of times do deal with alcohol, and they're not as clear-cut at all that – what was in the Rolling Stone article." He also tried to verify a quote of hers from the Rolling Stone article:

STELTER: I wanted to ask about a few quotes that were from you in her article, because...you appear in it a couple of times. And when I read this quote, I wondered, did she get it right?...She wrote, talking about frat culture – social culture: 'Hot girls who are drunk always get in. It's a good idea to act drunker than you really are. Also, you have to seem very innocent and vulnerable. That's why they love first-year girls.' So, that's a quote from you in her piece. Was it accurate? Did she at least quote you accurately?

PINKLETON: That is something I said. I think it's definitely true that the fraternities play a significant role in sexual assault. We know that you're more likely to be sexually assaulted in fraternities. I just didn't like that it seems like she was looking for a story that had to be in a fraternity.

STELTER: So you felt like you were quoted accurately in the piece. Did you see other inaccuracies, though, elsewhere in the story?

PINKLETON: I mean, just from the information that we're getting from the Washington Post, it's very clear that there needed to be fact checking and verifying of the story in general. So, I definitely see discrepancies now. But-

STELTER: It does sound like you don't trust the reporter anymore.

PINKLETON: I think that she should have fact checked, and I'm really upset and angry, like a lot of people are, that that didn't happen. And now, we're in a very difficult situation.

Pinkleton also revealed that Erdely had been in touch with her in recent days, and explained, "I am under the impression that she just wants to know what's going on, and I think that's a fair question, because I think there's a lot of confusion of what happened that night and she, like everyone else, wants to know. And I basically can't tell anyone else any more than what I've already said."