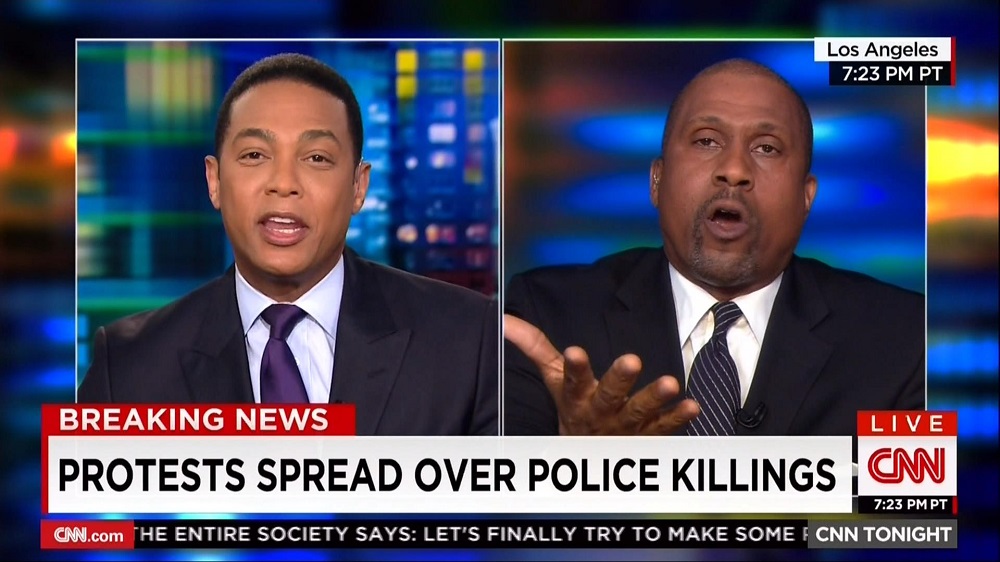 Don Lemon rushed to President Obama's defense on Monday's CNN Tonight, after guest Tavis Smiley attacked the Democrat from the left over supposedly not doing enough to help blacks. Smiley criticized Obama using his recent BET interview to "lecture black folk," and then doing the "jokey-joke thing" on Stephen Colbert's program. He later asserted that the President needed to "provide the kind of moral leadership...the kind of focus on a social justice agenda that would make sure, as Dr. [Martin Luther] King said 50 years ago, that we aren't still dealing with what he called the triple threat of racism, poverty, and militarism."

Lemon replied to the PBS host by touting Obama's apparent record, and claimed that "the President's between a rock and a hard place when it comes to this particular issue." The host went on to confront his guest about his critique of the chief executive. However, Smiley didn't take this sitting down: [video below]

DON LEMON: It sounds – that you're being extremely hard on the President because this is not-

LEMON: ...[I]t's not an easy – it's not nonsense...I'm just being honest with you. As I sit here, we spent – what – maybe three or four minutes, and you haven't said hardly anything positive about what the President is doing....it sounds like a whole lot of complaining about the President of the United States....You don't sit in that seat. You don't know the pressures that he's dealing with....

SMILEY: ...As always, that's an easy way for you to score some points. That was a lay-up. Hooray for Don. You got a couple of points for playing to a particular audience. The bottom – the bottom line is-

SMILEY: ...I think what you just did was insulting to me. At the end of the day, you asked me on your show – number one. You asked me a question – number two. I gave you my honest answer – number three. And then, you want to critique my answer as being too harsh. That's – you're entitled to that, but don't invite me on; ask me a question; ask for an honest question; and then jump bad with me, brother. That's all I'm saying-

LEMON: You can't tell me what questions to ask. I'm telling you what it sounds like, to anyone who's listening, you're doing a whole lot of complaining about the President-

SMILEY: And that's your impression. Don-

LEMON: Who's in a very tough position. That's all I'm saying to you.

Lemon first played a clip from the BET interview and asked, "What's your reaction, Tavis – the protests we're seeing across the country to Eric Garner, the Darren Wilson decision; what the President just said?" The guest wasted little time before slamming the President:

SMILEY: ...I appreciate and agree with much of what the President had to say. There were two or three things that, sort of, galled me today, quite frankly: number one, when the President goes on to suggest, in that conversation, that change takes time – that we have to be patient – Dr. King once said that change does not roll in on the wheels of inevitability. You have to be deliberate about these things. And so, for the President to suggest, to black folk, that this is going to take time; we have to be patient – that things don't happen overnight – I get the point he was trying to make. And yet, the truth is, if he had been patient in 2008, he wouldn't be the President tonight. So, that message of being patient, as opposed to doing exactly what folk are doing right now, I think, rings hollow – number one.

Number two, the President goes on B.E.T...to some extent, lecture black folk – but goes on Colbert to...do the jokey-joke thing – and I, quite frankly, don't fancy that. In the Oval Office, the President has a bust of Dr. King. I'm glad it's there. But at the same time, Dr. King once wrote a book called, 'Why We Can't Wait.' And I would recommend to the President, and all the rest of us, that we read that book of what King was saying just fifty years ago about why we can't wait.

The CNN host followed up by launching his defense of Obama: "You mentioned Stephen Colbert, and then, you mentioned – you know, going on B.E.T – he can't be multidimensional dealing with this situation?" Smiley replied by repeating his main point: "What I'm suggesting is, that the President...can't have one message for us; to be calm; to be patient; that things happen over time – and then...say something else to other people."

Lemon interrupted his guest with one of his own posts from Twitter: "You Tweeted – you said, 'Blatant disrespect for black life on Obama's watch. What will it take for him to step into this moment? #EricGarner' What would you have the President do?" Smiley pointed to the President's 2008 campaign, and indicated that the Democrat hasn't done much since then with regard to improving the overall issue of race:

SMILEY: ...When Senator Obama was running for president, and race became a critical issue in whether or not he was actually going to get the nomination – much less get to the White House – he took the time to give the most important major public policy address of his entire campaign at the National Constitution Center in Philadelphia. And now, what you're telling me is the best we can do is an interview here or there? I just don't buy it, Don.

LEMON: He's also doing things. He's starting a commission. He's been meeting with leaders from all over the country. So, okay – I take you at what you just said. But I think the President's between a rock and a hard place when it comes to this particular issue-

SMILEY: Oh, yeah. I don't doubt that. Let me – let me be clear. This happened – that is to say, racism being the most intractable issue in this country – was the case before he ever became president. I understand that there's – there's value in the symbolism of his being president. I'm just saying, as I've said so many times, that great presidents aren't born – they're made. They have to be pushed into their greatness....I'm just saying step into your moment, and provide the kind of moral leadership – not a one-off here or there on B.E.T. or Colbert – but step into your moment, and provide the kind of conversation; the kind of leadership; the kind of focus on a social justice agenda that would make sure, as Dr. King said 50 years ago, that we aren't still dealing with what he called the triple threat of racism, poverty, and militarism.

The two TV personalities then sparred over whether Smiley was being "extremely harsh" towards Mr. Obama, before moving onto the Bill Cosby sexual assault controversy.

Smiley's September 2014 appearance on Lemon's program was far less contentious. During that segment, the PBS host invoked the same Martin Luther King, Jr. quote to underline his take on the controversial shooting of Michael Brown in Ferguson, Missouri: "It underscores that Martin [Luther] King was right about what he called the 'triple threat' almost 50 years ago....He said what's threatening our very democracy is what he called the triple threat of racism, poverty, and militarism. What we saw in Ferguson was racism, poverty and militarism."