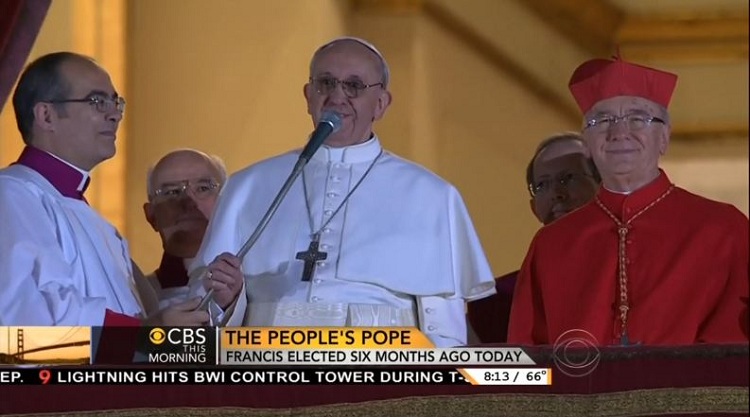 MSNBC's Daniel Berger trumpeted on Tuesday that "Pope Francis broke with Catholic tradition Monday by declaring that the theories of evolution and the Big Bang are real." In reality, the Argentinian pontiff's remarks are actually nothing new, as his predecessor, Pope St. John Paul II, indicated in 1996 that "some new findings lead us toward the recognition of evolution as more than an hypothesis." Later in the afternoon, Berger updated his lede by stating that "Pope Francis made a significant rhetorical break with Catholic tradition."

The correspondent also underlined in his online article, "Pope Francis: God is not 'a magician with a magic wand,'" that the bishop of Rome was "breaking with his predecessor, Benedict XVI, who arguably encouraged creationism and intelligent design theory." Berger later asserted that Pope Francis's "language was a significant departure from Benedict XVI and his close advisers, who had voiced support for the idea that intelligent design underpins evolution."

Berger also glossed over the fact that in the same speech on Monday, Pope Francis repeated a point that Benedict repeatedly made – that the universe is not "the work of chaos that owes its origin to another," but was created "directly from a supreme Origin that creates out of love." Thus, this most recent statement is compatible with the much-maligned concept of intelligent design.

It should also be pointed out that the Big Bang theory itself was proposed by a Catholic priest – Monsignor Georges Lemaître. Albert Einstein once complimented the Belgian scientist cleric's theory as "the most beautiful and satisfactory explanation of creation to which I have ever listened." Lemaître's scientific contributions were recognized by Pope St. John XXIII, who named him president of the Pontifical Academy of Sciences in 1960.

MSNBC.com posted a poll question at the end of Berger's article, which asked, "Will Pope Francis go down as the most progressive Catholic leader in history?" By proposing this question, the website follows in the footsteps of CBS This Morning, which hyped  "yet another example of just how progressive [Pope Francis] has been" during a September 2014 report. A year earlier, the CBS morning newscast heralded how "Pope Francis is already being described as one of the most progressive popes in modern times."