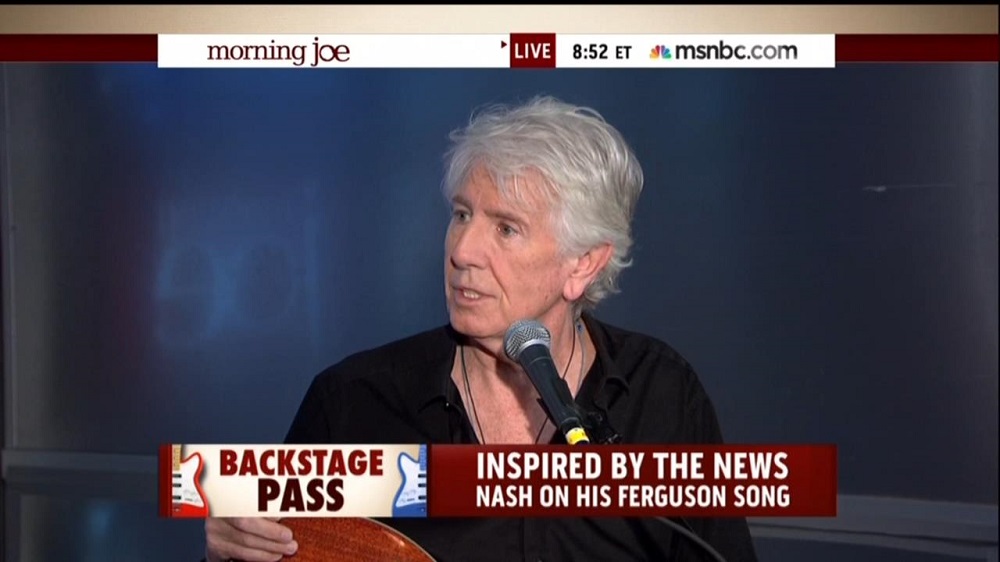 On Monday's Morning Joe, MSNBC's Joe Scarborough prompted hippie icon Graham Nash of Crosby, Stills, and Nash fame to promote his new song about the police shooting of Michael Brown in Ferguson, Missouri. Nash wildly contended that "what happened with...almost, the execution of Michael Brown, we had to say something."

Scarborough also asked the singer/songwriter to give his take about other political issues. Nash forwarded a standard left-wing talking point – that "the powers that be that run this world have us exactly where they want us. They want everyone to just lie down, shut up, while we rob you." He also took a shot at a regular boogeyman for MSNBC: the Koch brothers: [MP3 audio available here; video below]

SCARBOROUGH: Talk about the fight for a cleaner, safer environment. Where do we stand on that?

NASH: Well, you know, there are many, many problems facing us – especially with the acidification of the ocean and the rising of the temperatures and the melting of the glaciers. But it all really stems from climate change, you know?

NASH: And, you know, it's appalling how many climate change deniers there are in this world that are paid to make sure that the Koch brothers can still sell all the stuff to us. And I often wonder, don't the Koch brothers have children? Don't they have grandchildren? Don't they know what they're doing in this quest for more money? They're already one of the richest families in the world. How much more do you need? I mean, seriously, it's a terrible thing that's going on, but we have to be able to rationally deal with it. And when – you know, 90 percent of the scientists say that climate change is happening, we have to listen.

Co-host Mika Brzezinski then extended an invitation for Nash to expound more on his left-leaning views on the environment: "So let's actually do a whole segment on that. Graham, you should come back – because we – there are many sides to that story."

Oddly, Scarborough ended the segment by accompanying his guest as the singer played his old standard, "Teach Your Children Well."