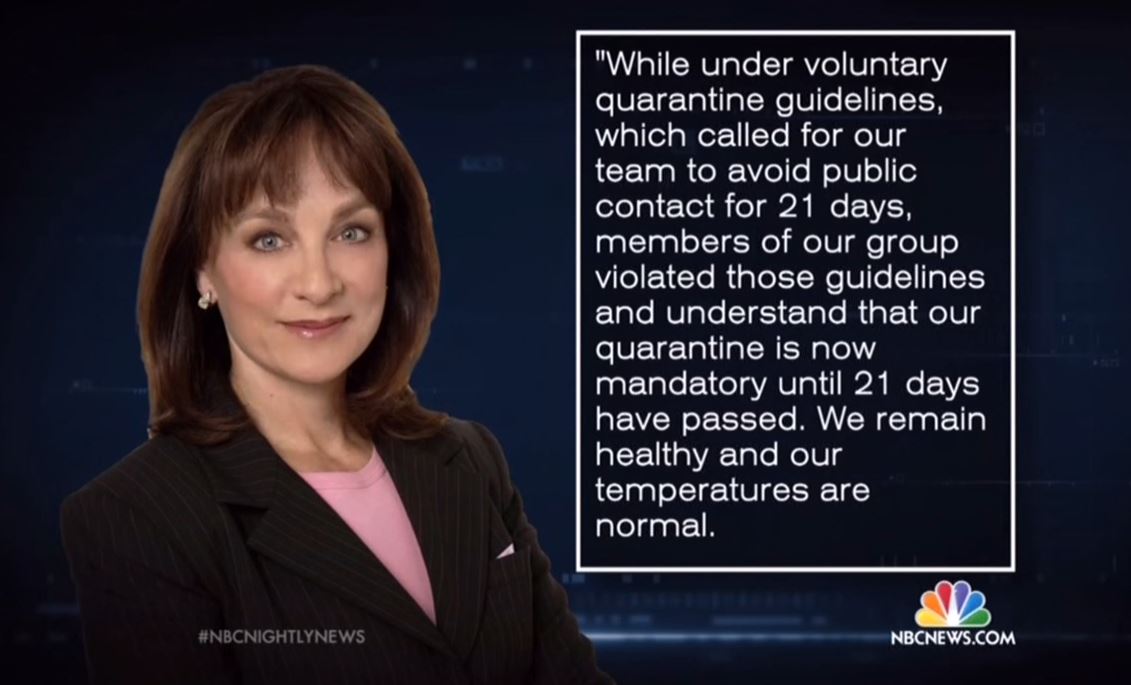 On Monday, David Bauder of the Associated Press spotlighted the ongoing controversy over NBC's Dr. Nancy Snyderman breaking her own quarantine, after she returned from West Africa to cover the Ebola outbreak. Bauder underlined that Synderman's "quarantine against possible Ebola exposure ends this week...but the troubles clearly aren't over for NBC News' chief medical editor." He added that "NBC must now decide whether Snyderman's credibility is too damaged for her to continue reporting on Ebola or other medical issues and, if so, for how long."

Bauder also pointed out that the journalist's "admitted lapse in the quarantine, combined with a curiously imprecise explanation, unleashed a furious response." He cited an expert on journalistic ethics, who asserted that Dr. Synderman's "'arrogance and dismissiveness' create[d] a huge PR and credibility problem for NBC."

The AP correspondent led his article, "NBC's Snyderman faces credibility issues," with his "troubles clearly aren't over" line, and quickly followed with his "furious response" phrase. He summarized the circumstances of Dr. Snyderman's international trip and her violation of the quarantine, after wondering if the doctor-journalist's "credibility is too damaged:"

Snyderman...covered the Ebola outbreak in West Africa and worked briefly with Ashoka Mukpo, the cameraman who caught the virus and is now being treated in Nebraska. Upon returning to the United States, Snyderman and her crew voluntarily agreed to quarantine themselves for 21 days, the longest known incubation period for the disease. They have shown no symptoms.

Yet New Jersey health officials ruled that her quarantine should be mandatory after Snyderman and her crew were spotted getting takeout food from a New Jersey restaurant.

NBC won't give details about who actually went into the restaurant, or even how many of its employees are being quarantined. Snyderman issued a statement saying "members of our group" violated their pledge.

Bauder then noted that "Snyderman's failure to be more specific about the lapse or take greater responsibility was another flashpoint," and cited Kelly McBride, "an expert on ethics for the journalism think tank the Poynter Institute," who blasted the NBC journalist's "arrogance and dismissiveness." McBride also "suggested that Snyderman 'lay low' or take a leave of absence. Certainly she should not report on Ebola anymore for the network, she said."

Later in the article, Bauder quoted from Susan Dentzer, a "longtime health journalist and commentator for National Public Radio," who defended Dr. Snyderman, and pointed out how a fellow doctor-journalist also got into hot water after covering the Ebola outbreak in West Africa:

Dentzer...said people shouldn't forget that Snyderman put herself at risk to travel to Africa and cover the story. The public is reacting to a fear of Ebola instead of science, she said.

"She and her team clearly should have observed the terms of their quarantine, and she has said clearly that they made a mistake," Dentzer said. "But let's put it in a broader perspective."

Before Snyderman's trip for takeout, ABC News' medical expert arguably had bigger problems. ABC health editor Dr. Richard Besser was in Africa at the same time as Snyderman and did not quarantine himself upon his return. That led ABC News President James Goldston to send his staff a memo explaining that the network was following medical advice.

Near the end of his report, the AP journalist actually forwarded advice from a former NBC employee on how the network's chief medical editor might be able to move on from the controversy:

An important first step for Snyderman will be to explain to viewers exactly what happened, perhaps on a venue like the "Today" show, said Bill Wheatley, a longtime NBC executive who now teaches journalism at Columbia University.

"If she and the network are more forthcoming about the whole matter, I believe that her credibility can be preserved," Wheatley said.