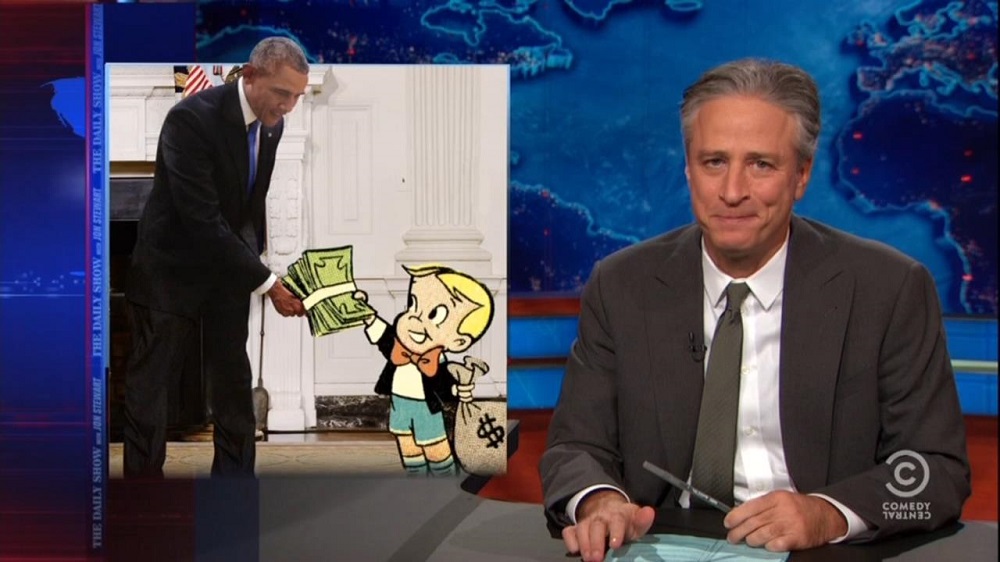 Jon Stewart attacked top liberals/Democrats on Monday's Daily Show for their blatant hypocrisy on the influence of money in politics. Stewart particularly mocked former Democratic senator and current Secretary of State John Kerry for his past lament that "the unending chase for money threatens to steal our democracy itself," while his party raises hundreds of millions of dollars for its campaigns.

Stewart gave a bit of snarky advice for the left-of-center politicians, who have wrung their hands over the "corrupting influence of money," while throwing fundraisers at Hollywood stars: [MP3 audio available here; video below]

JON STEWART: Here a tip: it may undercut your message when you're condemning a thing that you have clearly mastered. It's one of those, thou shall not kill, but if you're going to, single shot, back of the head – you want a carbon steel hacksaw, then put the parts in several trash bags, spread them out over a forest.

The transcript of the relevant part of Jon Stewart's opening monologue from Monday's Daily Show on Comedy Central:

JON STEWART: With three weeks to go, it is estimated 5.5 to 6.5 billion dollars will be spent on the campaign....One group in particular – very upset about the influence that money has on our politics.

SEN. JOHN KERRY, (D), MASSACHUSETTS (from January 30, 2013 speech on the Senate floor): The unending chase for money threatens to steal our democracy itself.

STEWART: But the Democrats are outraged, and their outrage is brought to you by – money –  (audience laughs) the pillow smothering our democracy in its hospital bed. (audience laughs) There's only one problem.

CARL CAMERON (voice-over, from September 25, 2014 Fox News Channel broadcast): In the ten Senate races where the most outside money has been spent, liberal groups have outspent conservatives 97 million to 79 million dollars.

SHANNON BREAM (on-camera, from October 8, 2014 Fox News Channel broadcast): There are states where the Democrats are outspending five or ten to one.

VIVECA NOVAK, CENTER FOR RESPONSIVE POLITICS (from September 25, 2014 Fox News Channel broadcast): Democrats have realized these are the rules of the game – as much as they profess not to like them.

STEWART: Here a tip: it may undercut your message when you're condemning a thing that you have clearly mastered. (audience laughs) It's one of those, thou shall not kill, but if you're going to, (audience laughs) single shot, back of the head – you want a carbon steel hacksaw, then put the parts in several trash bags, spread them out over a forest. (audience laughs)

STEWART: And recently, the Democrats' reticence for fundraising was truly on display.

UNIDENTIFIED MALE JOURNALIST 2: Tonight, the President will attend a fundraiser for the Democratic Senatorial Campaign Committee – or the DSCC – at the home of real estate mogul Rich Richman.

STEWART: What!? (audience laughs and groans) You know, it may not be the best way to send a message about your contempt for money in politics with back-to-back fundraisers from the homes of Lady Goop; and literally, a man named Ritchie Rich. (audience laughs) And then, there are – no, chances are, the real Ritchie Rich – my guess is just slightly taller.