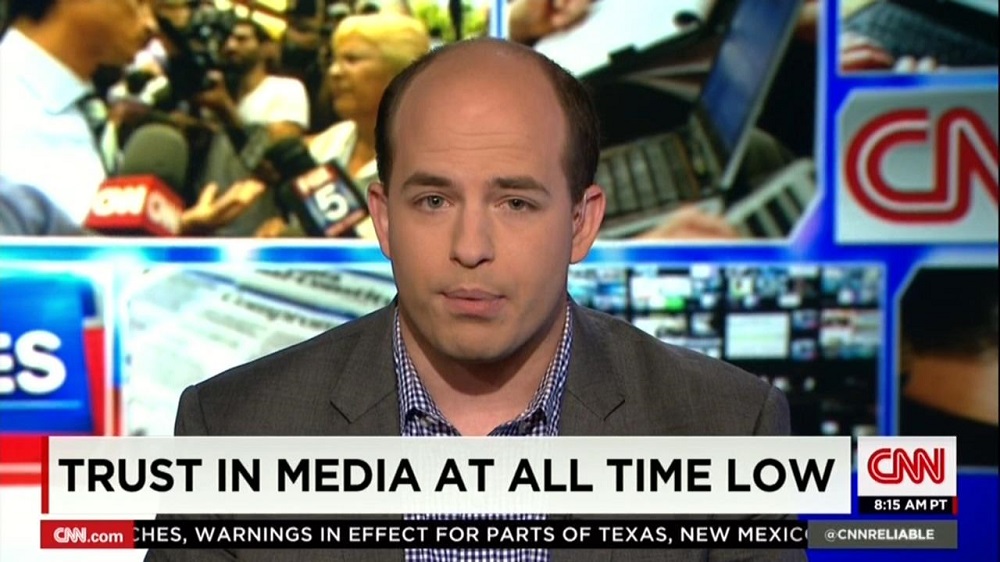 On Sunday's Reliable Sources, CNN's Brian Stelter touted a disgraced former representative as a non-partisan pundit and as an expert on media bias: "Now, I could bring in two partisan commentators now to argue about the media, but I'd rather from someone who's been in the glare of the news media – someone who's all too familiar with what happens when you go from darling to bad boy – then, maybe, back and forth. That's former Congressman Anthony Weiner."

Weiner went out of his way to acclaim CNN's supposed neutrality over competitors MSNBC and Fox News: [MP3 audio available here; video below]

ANTHONY WEINER: I kind of think that the media is like a Rorschach test for consumers, right? They can find whatever viewpoint they want – easier than ever. They can just go to Fox for conservative; maybe go to MSNBC for liberal. Be right here on CNN for the God's honest truth. But the fact is that it's become – the media and politics have almost become interwoven in people's minds in a lot of ways – that, you know, if they think the thing isn't on the level, they're likely to think it just as much about politicians as they are about the media – and that's something interesting.

Stelter led into his interview of the Democratic politician by playing up a statistic from the latest Gallup poll on the issue of media bias:

BRIAN STELTER: This is another really interesting Gallup question about whether the media is too liberal or too conservative. There's a big uptick in people that say it's too conservative....you've seen that for the past – about 15 years, that number pretty much hasn't changed – been between 44 percent and 48 percent of Americans who say the media, overall, is too liberal. But the bottom line is the people saying, the media is too conservative. That is what's ticked up quite a bit to 19 percent in this most recent study....

The CNN host continued with his indication that his guest wasn't partisan, and noted that Weiner is "now a part of the media – a columnist for the Business Insider website and for The New York Daily News." He first asked, "So, where do you come down on this issue of media bias? Is the media too liberal? Is it too conservative? Is it neither? Is it both?"

The liberal guest replied with his "God's honest truth" praise about CNN, and claimed that he was recently accused of being too cozy with conservatives: "You know, I now do this monthly column for Business Insider and for The Daily News...and this week, I took a more conservative view of something – they're like, oh, you're in the pocket of the conservatives."

Stelter and Weiner later speculated over the reason why people consider the media to be too conservative or too liberal:

WEINER: Right – but there's also something else-

STELTER: It's important not to use too broad a brush here-

WEINER: I know, but there's something else that happens: very often, what the media seeks to do –  particularly, in television – is do the split screen – say, all right, here's the conservative; here's the liberal; you guys fight it out. And what that allows, I think, is each a viewer to say –  because there's a liberal on the screen – it lets the conservative say, oh, they have that bias, or the other way around....and I think that – I don't know what the solution is, because I think you do want to have that cocktail of different views. But I do believe that it's dragging down the perception of the media.

STELTER: You said to me, before we started here, that the cynicism industry is fighting back. What do you mean by that?

WEINER: Well, it's more – it's biting back. I mean, what's happening is that there's so much cynicism. You know, you've got the Jon Stewarts of the world, who lift up issues just far enough to whack them. Bill Maher lifts them up just far enough to whack them – to make fun of them. Now, the politicians are doing the same thing. They all refer to the mainstream media, or – you know, don't believe Fox; or don't believe MSNBC – that we're now playing into this notion of cynicism that is part of the daily vocabulary. And sooner or later, that seeps in – you know? And then, something else is happening for the – now, there's so much money in politics to put nice sheen on politicians. The media, maybe legitimately, feels it's their job to tear it off.

So, what do you have?  You have – basically, they're in the business of trying to show things are not as shiny, as good, as they should be. Maybe, again, that might be their job, but the problem is that it's generally, in this ethos now – that I think a lot of people have when they talk to me about being in the media – they're like, I trust you even less than I did when you were in Congress, which wasn't a lot.

STELTER: Oh, really? Really? But isn't there a sheen that needs to be torn off? Isn't there a dirty reality we need to see beneath the surface?

WEINER: I guess, but – you know, it really is – and this is a critique I have of your business and I guess now it's kind of mine – is that – is that that can't be the sum and substance of what a reporter thinks their job is. They ran a glitzy TV commercial; we have to show that they're not all that – because you never then really get into the true conversation, I think, citizens want, which were about the issues – about people's viewpoints and ideas. If it's only about – oh, this guy wants you to think that he's all this great guy, he doesn't even live in the state, and that's our big expose. You never hear about what – you're not going to hear any debate about foreign policy in the Kansas elections this year. Put it that way.

Back in August 2013, former CNN host Piers Morgan sang the praises of Weiner as he interviewed Buzzfeed's Ben Smith on his now-defunct program: "There's something about Anthony Weiner I can't help liking. He's a very intelligent guy. I've seen him make speeches at big events where he's brought the house down and been very funny and very charming. And whenever I've had to deal with him myself, I've always liked the guy."