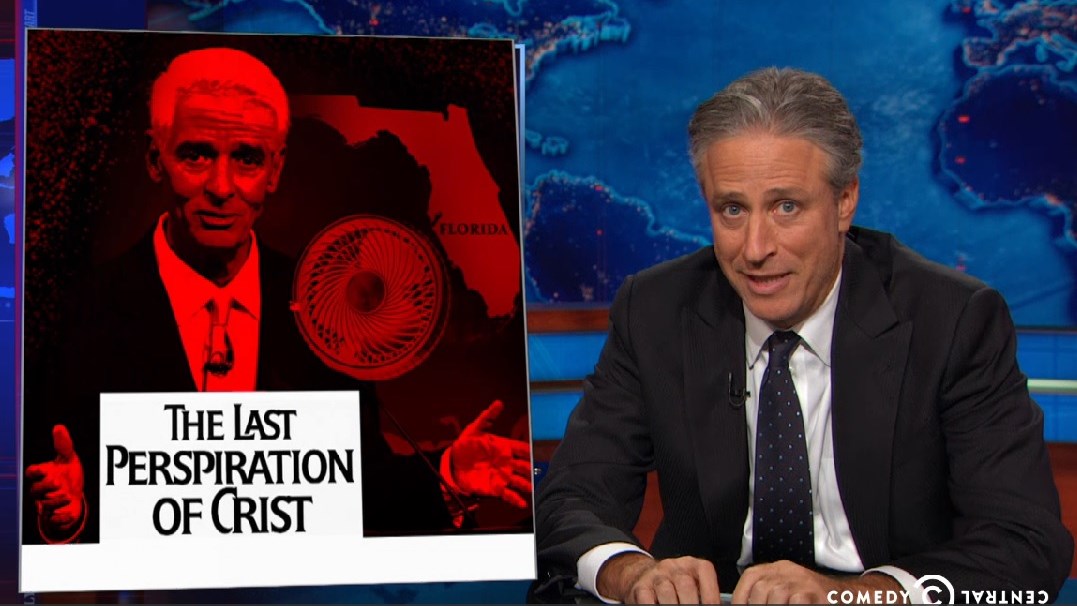 All of the liberal media seem to be pushing the same agenda: overhype the “Fangate” controversy to their political advantage.  On the October 16 episode of The Daily Show, Jon Stewart spent the first nine minutes of his half hour long Comedy Central time slot praising Governor Rick Scott for being the “pony” in the “horse s***” world” his very own President created. He called him "the hairless serpentine incumbent," and put his head on a snake.

Of course, Stewart did not find time to explain to his audience that Governor Scott left the building not because he was furious that the former Democratic Governor Charlie Crist was using a fan and violating the regulations of the debate, but because as Melissa Sellers of the Scott campaign said, “our campaign was not notified Charlie had even taken the stage because the last we heard, Crist was in an ‘emergency meeting’ with debate organizers pleading for his precious fan.”

Kudos must be given to Jon Stewart for knowing his network thrives on young male viewers, so he found a way to fill his entire nine-minute segment with crude jokes about “sweaty balls.” In his very first attempt at humor, the liberal darling commented, “He (Governor Rick Scott) can't not participate. A debate must have at least two parties to be considered a debate, otherwise it's a master-bate.” He even found a way to insult Christianity, with a graphic of the former Democratic Governor and the words "The Last Perspiration of Crist" written over top...and he said "Thank you, Jesus" for the controversy.

Clever, clever. Maybe for the episode Stewart could move beyond pushing an already over-hyped Republican mistake (that would not have even made news had a Democrat been in the same position) and leave the childish jokes behind. But that is what he does.

The Daily Show With Jon Stewart

JON STEWART: I’m not going to lie to you people. I can’t do it. This has been a lousy couple of weeks. Years. Decades. F***. Endless war, corporatist surveillance state that thrives on secrecy and tears of orphans. And now, a roving hoard of Islamist decapitation fetishes who are raising an African blood poop virus to see who can kill us first. Sometimes you wonder why go on? What’s the point? Well, I’ll tell you what the point is. If you give into despair, they win. We must keep fighting because as Frodo taught us, even if the world is horse s***, if you dig around long enough there is a pony in there somewhere. Well, it turns out, ladies and gentlemen, I found a pony last night in Florida.

MODERATOR: We are live from Broward College in Davie Florida. We have governor Charlie Crist, Florida Governor Rick Scott. Our incumbent governor and the Republican candidate for governor is also in the building. Governor Rick Scott, we have been told that Governor Scott will not be participating in this debate.

STEWART: He can't not participate. A debate must have at least two parties to be considered a debate otherwise it's a master-bait, it's just one. Perhaps Governor Scott is late. Maybe he's late. Perhaps the hairless serpentine incumbent got sidetracked looking for a snack. Look there. But it was the reason for governor Scott's absence that reminded me why life is so beautiful.

MODERATOR: Governor Crist has asked to have a fan, a small fan placed underneath his podium. The rules of the debate that I was shown by the Scott campaign say that there should be no fan. Somehow there is a fan there and for that reason, ladies and gentlemen, I am being told that Governor Scott will not join us for this debate.

STEWART: Governor Rick Scott of Florida has refused to debate former governor of Florida Governor Crist because former Governor Crist has a fan that appears to be providing a small amount of respite for his presumably sweaty balls. Thank you, Jesus! Look, we all know what's happening here. It's Florida. There's a humid environment in Florida. Crist's boys got sweaty so the former governor pops down and picks up a fan at, what do you call it there, Bed, Balls and Beyond. What's the issue?

MODERATOR: The first question I want to ask you Governor Crist is why did you insist on bringing a fan here?

CRIST: Why not? You know? Is there anything wrong with being comfortable?

STEWART (gesturing wildly): Now THAT! Is how you win votes in Florida!

Stewart later explained “We could have delved into all the terrible actual answers Rick Scott gave in the debate about his horrifying policies for Florida, but that is not nearly as fun as him missing four minutes of a debate because his opponent had a fan pointed at his balls.”