Donald Trump enjoys a higher favorability rating among Latino Republicans than Jeb Bush and every other candidate in the Republican presidential field, Univision reported.

The nation’s top Spanish-language network, which has been tangling with the real estate magnate over his remarks on immigration since he entered the presidential race, included in its flagship national evening newscast the results of a survey by Public Policy Polling, which show Trump with a 34% favorability rating among Hispanic Republicans, compared to 31% for Jeb Bush, 30% for Ted Cruz and 29% for Marco Rubio.

LOURDES DEL RIO, REPORTER: In effect, in a Public Policy Polling survey, Trump leads with 34% of Hispanic voters, surpassing Jeb Bush, Ted Cruz and Marco Rubio, but this is a survey among Republicans. When Trump goes up against Hillary Clinton, she beats him by an overwhelming 61% to 28%.

Nonetheless, as Del Río also pointed out in her report, the same poll also found Trump performing the worst among the Republican field against Hillary Clinton in a general election match-up. The poll was conducted among 1,087 registered voters between July 20-21. The poll’s margin of error for the overall survey was 3%. 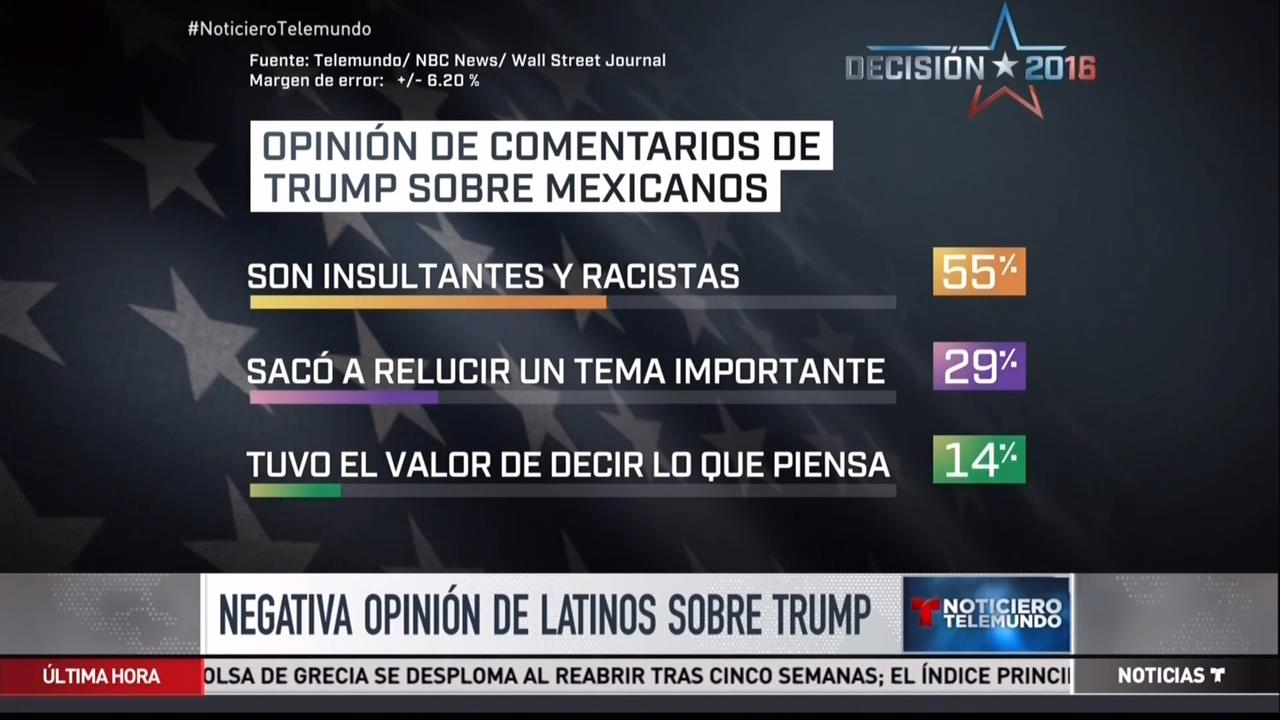 Meanwhile, Telemundo did not report the referenced favorable polling for Trump, but instead covered results from a Telemundo/NBC News/Wall Street Journal survey that found that 55% of Hispanics in general surveyed believe Trump’s comments about Mexicans are insulting and racist, while 29% believe “Trump should have been more careful with the language he used, but is raising an important issue”, and another 14% are of the opinion that "Trump had the guts to say exactly what was on his mind about an important problem we need to deal with."

The referenced Telemundo/NBC News/Wall Street Journal poll of 250 Latino adults was conducted July 26-30. The margin of error was 6%.

Telemundo also reported poll results showing that among Republicans overall, Trump is leading the field, with 19.8% of support, followed by Walker (13.2%) and Bush (13%).

The relevant portions of the referenced national newscasts appears below:

LOURDES DEL RIO, CORRESPONDENT: Donald Trump has received a lot of criticism for saying his immigration plan consists of deporting the 11 million undocumented immigrants who are in the country. And later allowing those who are good to return.

DONALD TRUMP: A poll came out two days ago, where I’m number one with the Hispanics.

LOURDES DEL RIO, CORRESPONDENT: Nevertheless, today the billionaire highlighted that he is the favorite among Hispanics, according to the polls. He also assured that if he wins the Republican nomination, he will win the Hispanic vote in the presidential election. In effect, in a Public Policy Polling survey, Trump leads with 34% of Hispanic voters, surpassing Jeb Bush, Ted Cruz and Marco Rubio, but this is a survey among Republicans. When Trump goes up against Hillary Clinton, she beats him by an overwhelming 61% to 28%.

ROGELIO MORA TAGLE, CORRESPONDENT: And it’s that upon launching his campaign, Trump said among other things that the people who emigrate from Mexico bring to the United States drugs, crime and are rapists. Those comments, for 55% of those polled, are insulting and racist, and out of place in a presidential campaign. But despite the negative numbers, among those polled there is also a percentage that believes the controversy generated by Donald Trump has helped bring to the table a very important topic: immigration. That’s what 29% believe, while another 14% believe Donald Trump had the courage to say what he thinks.