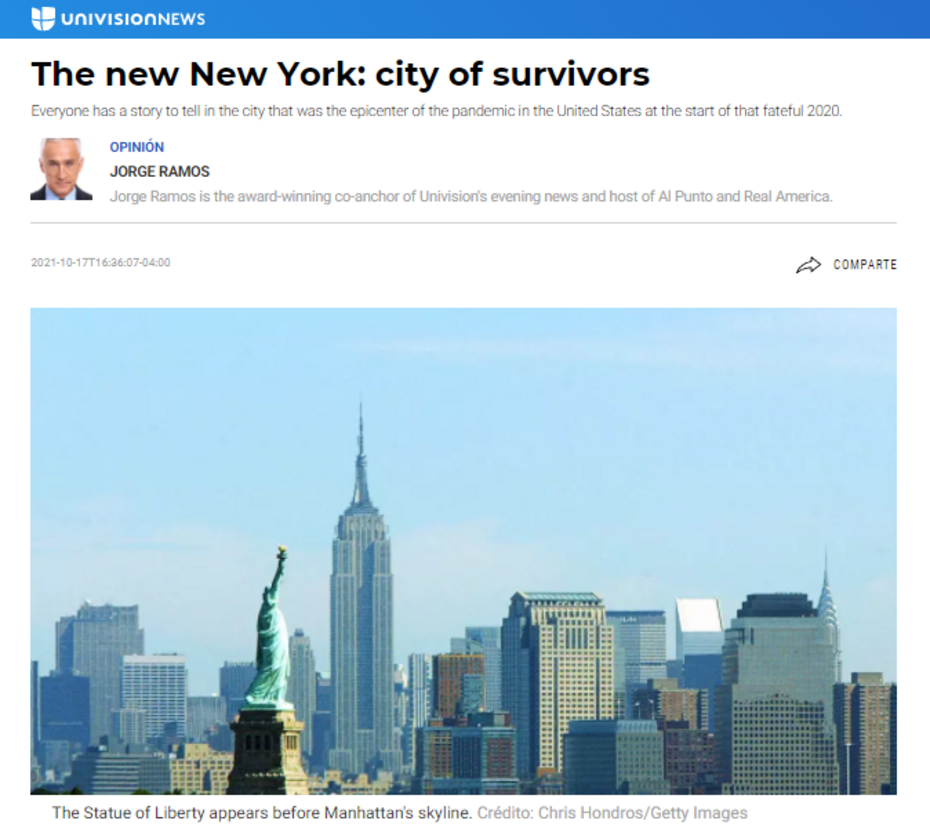 Ramos offered his take after spending a couple days there as an elite tourist, staying at a midtown hotel, doing the rounds of international dining, and other perks (mani-pedi) in a city that, according to him, was so much better with fewer people. Never mind the closed businesses, struggling restaurants, commercial and residential real estate in shambles, rampant unemployment and crime. In his own words, “Without so many visitors, there are parts of the island that look like bucolic provincial neighborhoods”.

Amazing how Ramos managed to absolve both de Blasio and Cuomo from turning New York into a “city of survivors”:

New York is awake again. I remember, sadly, the night images of ambulances, the removal of bodies of Covid victims from buildings, the paramedics who were not enough, the Navy ship docked at the port in case the hospitals collapsed, the uncertainty when there was no vaccine or trusted information, and the applause at sundown from people in their windows for front line workers.

"Night images of ambulances, the removal of bodies of COVID victims"... YES, we saw them, the bodies of elderly men and women killed at nursing homes thanks to Cuomo's catastrophic executive order, the unused Navy hospital ship sent by then-President Donald Trump, rampant crime, and the first responders that could lose their jobs thanks to vaccine mandates. The list could go on and on.

But this is Jorge Ramos we're talking about, the self-proclaimed champion of standing opposite to power. But, as Special Editorial Advisor to the CEO of Univision, Ramos stands right next to power. And the privilege of such power is the production of such detached and self-indulgent columns as this one.

​Let advertisers like Acura know what you think about the rampant bias in Spanish-speaking national news. Write them here.

Click on "expand" to read the complete opinion column as published by Univision.com on October 17, 2021:

The city that never sleeps was sleeping. Or at least it looked that way at the new and magnificent terminal at the Laguardia airport after midnight.

My flight was late, and there were no taxis. Not one. But all of a sudden an upbeat Ecuadoran who makes a living transporting stranded passengers like me saw me and took me to the city. Cesar – he said that was his name – drives overnights, is recovering from a heart attack and feels lucky that the Coronavirus did not put him in bed, like it did to his business partner.

He helped me to avoid having to wait for an Uber or public transportation. New York was indeed awake after all.

The city seems changed. Fewer people, less traffic, fewer shops, offices and restaurants open, fewer tourists, less intense. But behind every New Yorker there is a survivor, someone who projects that trendy new word, resilience. New York was hit hard. In this city of 8 million people, more than 1 million had Covid and more than 34,000 died – 10 times more than in the 9/11 terror attacks.

The first thing you notice in New York after the worst of the pandemic is that the streets don't have as many taxis as before. Uber and Lyft have taken the yellow out of the city. It's true, and there are also fewer traffic jams and a new respect for bike messengers who deliver packages and food and became essential during the pandemic. They are the heroes on two wheels.

There are tons of commercial spaces for rent and buildings with darkened offices. Property prices have dropped. “It's a correction,” I was told by a real estate agent, with forced optimism. And that forced me to rediscover the city, to find out who's still there and who left.

My favorite Neapolitan pizza place – with the thick crust and marinara sauce – in lower Manhattan is closed and promising to reopen this fall. But in a single weekend I managed to eat exquisite Greek, Italian and Japanese dishes. Many restaurants have taken over the sidewalks and even part of the street to serve clients outdoors. And they all asked for my ID and vaccination card, for which I was grateful.

Without so many visitors, there are parts of the island that look like bucolic provincial neighborhoods. That's enchanting when you're surrounded by skyscrapers of 50 floors or more.

What also stands out is that there appear to be fewer workers doing the same work. That explains the delays: fewer mechanics for airplanes, fewer waiters in restaurants, one single employee in charge of the whole store – waiting lines and stories of survival. Everyone has a story to tell in the city that was the epicenter of the pandemic in the United States at the start of that fateful 2020.

Two examples. An employee of a Midtown hotel told me proudly how he survived during the 14 months the hotel was closed, using his retirement fund and a bit of help from the federal government. And out of the 10 employees at a nail salon near Central Park, only four are left. They are paid by the hour, and work only three days per week. But one of the four told me she appreciates the fact she's working, earning enough to avoid an embarrassing return to South America.

New York is one of those cities that sets the pace and is copied by many others. That's why it's important to check how it's coming out of the crisis.

Eric Adams, an African American, will surely be the next mayor of New York. He won the Democratic primary and is the clear favorite to win the Nov. 2 election. I spoke with him during the 20 th anniversary of the 9/11 attacks, when he was a policeman. What will be his key challenge as mayor, I asked? “That people believe again,” he told me.

In Times Square, the city's commercial and entertainment center, everyone seems very strong and immune to Covid. Or maybe they are bored and tired of so much isolation. On one Saturday night, a wave of people caught me and pushed me from one corner to another. My two vaccine shots and mask did not seem enough with so many others around me. But the crowd, the noise, the music blasting, the movement and the sense of feeling like part of a collective for the first time in more than a year filled any heart with energy. (My two Covid tests after the visit were negative. Luckily.)

All of that is over. I like the new New York. It is a city of survivors. But it is also more livable, more human and stronger than ever. I never doubted they would get over it – again! New York reminds me of a song by Nacha Guevara that defiantly proclaims, “Better times, worse times, I have lived. And here I am.”