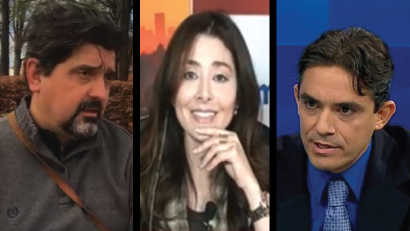 Following the release of the Media Research Center’s groundbreaking special report Censored! How Online Media Companies Are Suppressing Conservative Speech, MRC Latino, the Hispanic media arm of America’s media watchdog, has found that well-known conservative Latino communicators across the country have also been subjected by the same social media giants to a similarly disturbing pattern of suppression of their free speech rights.

Miami-based conservative champion Alex S. González, for example, tells MRC Latino that Facebook has taken down his page some 15 to 20 times, and he has also been censored by YouTube, “for mentioning terms like LGBT. Whether for or against, their algorithms assume the comment is negative. I once mentioned that 42% of transgender persons try to commit suicide, even after having a sex change, and was blocked.”

Ipso facto, “your voice is silenced” says González, a vocal Trump supporter who also contributes to the online platform Telecapitalista in a critical battleground state. “Political ideology, religious ideology, are completely one-sided. If you criticize Christians you are an atheist, but if you criticize Islam, you are insulting them. You can insult Anglo-Saxons, but never mention the word African-Americans, that's it. Blocked. I never use foul language nor call for violence, something liberals do freely in their effort to make the rest of the society submit to their ideals,” he pointed out.

On Twitter, standard conventional tweets on partisan political matters by prominent Latinos for Trump founder Marco Gutiérrez, along with current California congressional candidate Jazmina Saavedra, have routinely been labeled as containing “sensitive material.” For example, this one, posted on May 23, 2018, is simply a photo of the California State Capitol building with the following text: California lawmakers proposed 33 bills that would increase taxes by $261 billion.

Facebook Live transmissions by MRC Latino’s own Malibu, California-based analyst, Patricia Arbulú, have also been repeatedly interrupted, most notably on February 23, during an extensive interview with former Trump campaign Hispanic Outreach Director A.J. Delgado. Because Facebook repeatedly took down the transmission mid-interview, the production, which was also recorded separately by the MRC Latino production team, had to be edited and was subsequently reposted.

Arbulú’s weekly Facebook Live segments for MRC Latino are completely free of insults, much less calls to violence, and are dedicated to shining a spotlight on news that is either censored or under-reported by the liberal national Spanish-language news media.

One of his features is a weekly program called “Walking and Talking” (Caminando y Conversando). During the days before the 2016 presidential elections, Torres Fletcher says the pro-Trump program was taken down by Facebook eight times, without any apologies or explanations.

RACI currently has an average of 21,350 members with a weekly growth of some 50 accounts, but Torres Fletcher says “We have also noticed the erosion of registered accounts. Facebook does not produce a report of outgoing accounts, or those removed by them, they only point out numbers,” he noted. “We can only know who left and why when it is for administrative or disciplinary reasons.”

Torres Fletcher added that “Like all of us who are on Facebook, I have to access alternative accounts because on occasions I´ve been punished for up to 60 days without being able to dispute it with an appeal.”

According to Ángel Javier Rosario, founder of the also Georgia-based Latinos Conservative Organization, this past May 10, 2018 the mere mention of the word “Clinton” got both the Telecapitalista page and his personal page taken down by Facebook. On that day specifically, he said, he was discussing matters related to the finances of the Clintons and the Clinton Foundation. No hateful ideas or bad words were spoken, much less bullying.

The excuse from Facebook? He was accessing the page from a different location (his phone) than usual. To restore his access, he had to re-enter all his personal information, including his driver’s license. He also opened another personal Facebook page.

“I know of several persons who collaborate with the group (Telecapitalista) who have also been suddenly removed, in effect causing them to lose all their fans and comments, as well as the option to go live.” One of those he mentions is Mercedes Luna, a conservative leader originally from Argentina. Her Facebook live program titled ´The Realities Many Keep Under Wraps” (Las realidades que muchos callan), was limited for discussing illegal immigration.

Alex González said he is grateful for concerted efforts, such as those spearheaded by the Media Research Center, to sound the alarm and put pressure for the social media giants to stop clearly unjustified, anti-American censorship. “I am sure that in the end, all of this will have a positive result.”

The positive result that is sought will only be possible if, as Media Research Center President Brent Bozell has said, “conservatives are given the same ability to express their political ideas online as liberals, without the fear of being suppressed or censored.”

As Bozell declared upon launching the Conservatives Against Online Censorship coalition last May 15, “Freedom of speech, regardless of ideological leaning, is something Americans hold dear. Facebook, Twitter and all other social media companies must acknowledge this and work to rectify these concerns.”