Journalists Must Take A Stand Against The Public Lies Of...Jorge Ramos 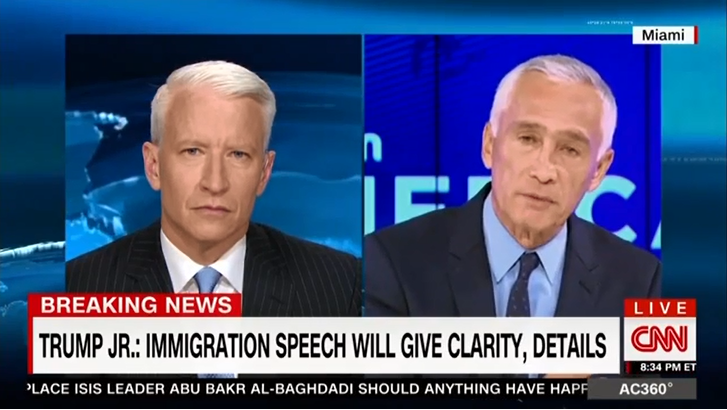 Univision/Fusion anchor Jorge Ramos is in the middle of another valedictory establishment media tour, promoting his most recent Time column as if it were a newly-released book and defending himself against charges of bias. His latest "tour stop" was last night, with CNN's Anderson Cooper, and the time has come to hold Ramos to the lofty moral standard that he seeks to impose on his fellow journalists.

In terms of substance, last night's appearance by Ramos bore very little difference from what one might expect from a Clinton surrogate. Cooper began the interview by asking questions on policy - immigration policy, naturally - and Ramos followed with oppositional statements, statistics, and his own opinions.

Having concluded the brief immigration colloquy, Cooper asked Ramos about the Time op-ed. Of note, this is the first time that I can recall Ramos characterizing his litany of declarative statements at Donald Trump's Iowa press conference - the one from which he initially got kicked out - as declarative statements, after a year of whining about being kicked out for asking questions.

The centerpiece of Ramos' moral preening and virtue signaling throughout the last year-plus - that is, his keystone talking point - is some version of this statement: "It is the duty of a journalist to abandon neutrality and take a stand in the face of racism, discrimination, corruption, public lies, violations of human rights and dictatorships." This is the activist standard that he wishes to impose on the rest of American media. However, Ramos has willfully failed to uphold that standard.

Look at this exchange between Ramos and Cooper:

ANDERSON COOPER, HOST, AC360: Do you make the same argument about Hillary Clinton not giving press conferences— it's important to be confrontational about that, as well?

JORGE RAMOS, UNIVISION/FUSION ANCHOR:  I agree with you completely. I think I've been tough, very tough also on Hillary Clinton. I asked her about that e-mails, and Benghazi during the Democratic debate. Last Sunday, I asked Tim Kaine, her running mate, on the possible conflict of interest with the, with the Clinton Foundation. And I've been very tough on President Barack Obama because of his deportation policies.

So the fact that I'm suggesting that we should be really, really tough on Donald Trump because of his racist remark and his sexist remark does not prevent me from being tough with Hillary Clinton and Tim Kaine and President Barack Obama. I think we have to be as tough with both of them.

Ramos continues to justify his fusillades against Donald Trump by alleging that he is equally tough against Hillary Clinton. This is simply not true. By his own admission, he has only directly engaged Clinton once (same as Trump), and only once asked Clinton-Foundation related questions of Senator Tim Kaine.

The tough-on-Obama stuff is almost irrelevant, because although it is true that Ramos was hard on him for having blown off a key 2008 presidential campaign promise (comprehensive immigration reform within the first 100 days), Ramos later absolved him for having enacted DACA and proceeded to shift the blame for the immigration failure onto the Republican House.

Ramos' continued insistence that he is "very, very, tough" on Clinton in the face of overwhelming evidence to the contrary is, in fact, false and could well be characterized as a "public lie" per his own exacting standard. As we've noted before, Ramos has been harder on the President of Mexico than on Hillary Clinton, despite the thick clouds of scandal and corruption that linger over both. There is no extensive record of opinion columns on the Clinton Foundation, or on the email scandal, or on anything that could bring political peril to the Democratic nominee.

Furthermore, there was no acknowledgement of the MRC's call for Ramos to step down from Univision's anchor chair due to his extreme biases, nor any acknowledgement of MRC President Brent Bozell's challenge to debate Ramos. Rather than hold Ramos to his own moral standard and call him out, Anderson Cooper simply ended the interview.

If Ramos insists on peddling these factual inaccuracies in order to bolster his narrative, promote his ongoing jihad against Donald Trump, and push out the edges of objective journalistic coverage, then he should also expect the increased scrutiny that comes with it.

Judge not, and call not for judgment based on reaction to Donald Trump, lest ye be judged and found guilty by your own words.