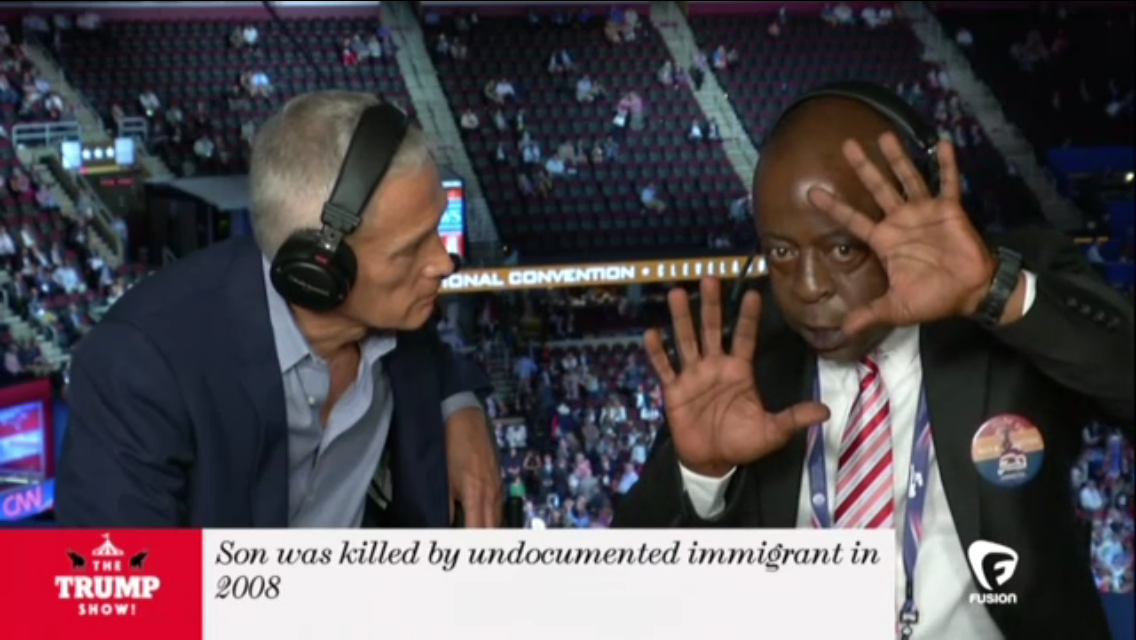 Seldom will you see such a clear case of advocacy journalism as this: Jorge Ramos pitching comprehensive immigration reform to the father of a young California man murdered by an illegal immigrant in 2008, just three doors down from his home. But this is exactly what Fusion viewers saw Monday night as part of the Univision affiliate's coverage of the Republican National Convention in Cleveland.

Jamiel Shaw, Sr. delivered a speech on the floor of the Republican National Convention as part of Monday night's "Make America Safe Again" motif. Shaw subsequently sat down with Jorge Ramos to discuss "Jamiel's Law", a proposed Los Angeles city ordinance which would deny sanctuary city protections to illegal immigrants in gangs. Here are the specific policy portions of the proposed ordinance:

Section 2. No Sanctuary For Gang Members. The policy of this City from this point forward is, and shall be, to deny any "sanctuary city" protection to illegal aliens in gangs. Neither the Mayor, the Chief of the Police nor any other City employee shall prohibit or inhibit Los Angeles Police Department officers from lawfully investigating possible violations of federal immigration laws by gang members.

Section 3. Mandate To Investigate, Arrest And Assist. The Mayor and the Chief of Police shall immediately develop and implement a plan for the Los Angeles Police Department, in cooperation with Immigration and Customs Enforcement and the United States Attorney, to identify, arrest, deport and/or prosecute and imprison gang members who are in the country illegally, without waiting to catch them committing murders or other crimes before enforcing the immigration laws against them.

Section 4. Reporting Requirement. The Mayor shall provide the City Council and the public with quarterly written reports describing in reasonable detail the City's efforts to implement Jamiel's Law. The reports will include, at a minimum, the number of persons arrested by the Los Angeles Police Department for violating federal immigration laws, and the number of those persons who are gang members.

Keep that in mind -- that Jamiel's Law only seeks to deny sanctuary to known gangbangers -- as you watch the exchange between Ramos and Shaw.

JORGE RAMOS, UNIVISION/FUSION ANCHOR: Mr. Shaw, but don't you think it would be a better idea, instead of doing that (Jamiel's Law), that maybe the police wouldn't apply the law correctly with many immigrants who are not criminals, how about permanent immigration reform, in which everyone would go through background checks?

JORGE RAMOS: Everybody. The 11 million who are here. Isn't that a better idea?

JAMIEL SHAW, SR: I mean, it could be if you're in the political part, but see, I'm thinking as a father who misses his son. Whose son didn't do nothing. All my son was doing was walking down the street, which is a freedom that he has. He should be able to be allow...he should be able to walk down the United States.

JORGE RAMOS: I agree. And we don't want that to happen again. That's why you're just here. that's why you just spoke.

JAMIEL SHAW, SR: Right. But I need more than -- me personally -- I need more than just "reform" because I don't believe in that. I want people to go after the gangbangers. Crips, Bloods, whoever, I don't care. But where I got into the fight is, my son was murdered by a 18th Street gangbanger, illegally in the country, from Mexico. I mean, that's just what happened.

So devoted is Jorge Ramos to an open border that he would lecture the father of a young man killed by an illegal alien gangbanger for no other reason than over colors: respectively, the color of his skin and the color of his Spiderman-themed backpack. Based on Ramos' line of questioning, one wonders whether Ramos even bothered to read the proposed ordinance before lecturing Shaw on the horrors of sanctuary city bans.

There are other fundamental dishonesties at play here. It is important to remember that Shaw initially proposed a local ordinance (a congressional version of Jamiel's Law was filed in 2015), whereas Ramos floats the idea of a comprehensive immigration reform to be passed by Congress. Ramos also floats the overreach strawman, while ignoring the fact that the measure specifically targets known gang members- many of which are possibly already on the LAPD's radar. What Shaw proposes isn't even a full ban on sanctuary city protections like, say, Kate's Law. Now we know that even a narrowly targeted sanctuary city ban is unacceptable to Ramos.

Ramos relentlessly presses on behalf of the 11 million, and the Kate Steinles and Jameil Shaws of the world are the eggs that unfortunately had to be broken in service of the amnesty omelet. This is what advocacy journalism- boss Isaac Lee's vision of a "fairer and more inclusive nation"- looks like.