Univision’s Jorge Ramos once again took full advantage of the opportunity to engage in wholesale Trump-bashing during an Al Punto segment about the new Mexican movie Desierto (Desert), which presents the harrowing fictional story of a gun-toting American vigilante hunting down a group of unauthorized Mexican immigrants as they cross the U.S. border.

Ramos was quick to highlight the movie’s trailer, which juxtaposes excerpts from Donald Trump’s presidential campaign announcement speech with scenes of unauthorized immigrants entering the U.S. and being gunned down.

JORGE RAMOS, HOST, AL PUNTO: Jonás, do you remember the moment in which you heard Donald Trump, on June 16, 2015, say that Mexican immigrants, that is to say, you both and me, that we’re criminals, drug smugglers, and rapists?

Bald-faced mischaracterizations like this one continue to be routine for Ramos, ever since Trump’s announcement speech. Ramos’ insistence in constantly manifesting his utter contempt and hatred for Trump is clearly affecting his ability to do his job as a news anchor. To call what he does in this segment "journalism" is a disservice.

At the same time, perhaps Ramos, like the film’s producers, have found Trump and their portrayal of him as their evil nemesis good for ratings and business. The producers of Desierto are essentially using Trump to sell the film for them.

These are people that constantly characterize disagreeing viewpoints as "racist". Heaven forbid you simply want your country's sovereignty and borders respected and secured, right?

Below is the transcript of the cited relevant portion of the April 17 broadcast of Al Punto: 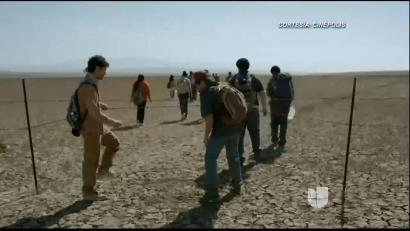 JORGE RAMOS, HOST, UNIVISION: "Words are as dangerous as bullets" is the message from the movie Desierto starring Gael García Bernal and directed by Jonás Cuarón. I spoke with them a few days ago about their movie, about Mexico, and about Trump.

JORGE RAMOS, HOST, UNIVISION: I thank you for coming over and speaking with us about a movie that surprised me, when I found out that it was filmed two years ago and when the Donald Trump phenomenon did not exist, Jonás.

JONÁS CUARÓN, FILM DIRECTOR: I started writing this movie eight years ago, and since then I was starting to see in the United States a rhetoric of hate against migrants. It started - I mean, recently - with the laws in Arizona, but since then, I, living in the United States, have always had very present the rhetoric of hate against foreigners, against migrants. That was very strong for me.

JORGE RAMOS, HOST, AL PUNTO:Jonás, do you remember the moment in which you heard Donald Trump, on June 16, 2015, say that Mexican immigrants, that is to say, you both and me, that we’re criminals, drug smugglers, and rapists?

JONÁS CUARÓN, FILM DIRECTOR: Totally, and since I heard this speech, what worried me the most is that many times... with them being only words, it worries me that people won't be conscientious of the violence behind those words, that was why two weeks ago I had the idea to illustrate Trump's words with the violence shown in my movie. Because I think it's very important to make people aware of what's in Trump's speech.