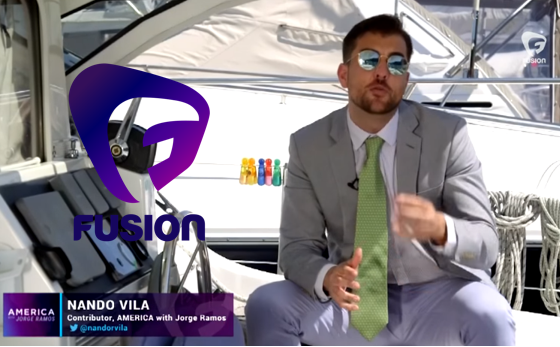 Once again, Fusion, the reliably liberal English-language arm of Univision, has gone out of their way to produce media content targeting conservative personalities engaged in the political process, while entirely ignoring similar situations on the left side of the political spectrum.

In the world according to Fusion’s Nando Vila, donating money to conservative candidates is portrayed as essentially evil, and all PAC money in support of Republicans is dark and dirty. Vila’s piece pretends to expose the dirty business of campaign contributions (all of it entirely legal and decidedly constitutional, mind you), with a particular focus on the Koch brothers and conservative donor Sheldon Adelson, a sure fire way to get the liberals riled up with self-righteous rage.

Predictably, the segment, which appeared on America with Jorge Ramos, reveals itself as a fabrication of totally biased political propaganda, making no mention whatsoever of George Soros and the millions and millions he and his network of allies put into politics.

No reference either to Hillary Clinton getting paid ridiculous and scandalous amounts of money to give speeches for big banks. No, the idea and intent here is to underscore a narrative: Republicans are the bad guys who operate subversively to control people’s lives by buying favors and political outcomes. No mention that the left is currently flourishing, thriving even, in third party money, union money, billionaire money and SuperPAC money.

Even the saintly Bernie Sanders is on a spending tear, dropping $122.6 million on the election so far, which is nearly four times the Donald Trump campaign’s $33.4 million, according to Federal Election Commission filings. Thus far, Sanders has raised roughly $140 million compared to Trump’s $35 million.

The reality is that the Koch Brothers don’t even rank in the top 50 when it comes to political donors in the United States. Moreover, Republican candidate Ted Cruz has made fighting political cronyism a pillar of his campaign, but you would never know it by viewing the fast-talking, morally narcissistic host of the video.

Remember, this is Fusion’s Nando Vila we’re talking about, the guy who was not above making the case that Supreme Court Justice Antonin Scalia’s death was actually a good thing. He’s also kind of obsessed with Bernie Sanders and making reparations a thing, just take a look at his body of work if you don’t believe me.

Don’t ask me why or how, but Vila is the Vice President of Programing at Fusion and has been responsible for much of the network’s heavily left-tilted content. Maybe given Fusion’s track record and the fact that Disney just severed ties with them due to being a financial black hole and specifically being too edgy politically, it’s not surprising that they’ve had a guy like this in that particular position. From the get-go, credibility and great decision making haven’t exactly been Fusion’s strong suit.