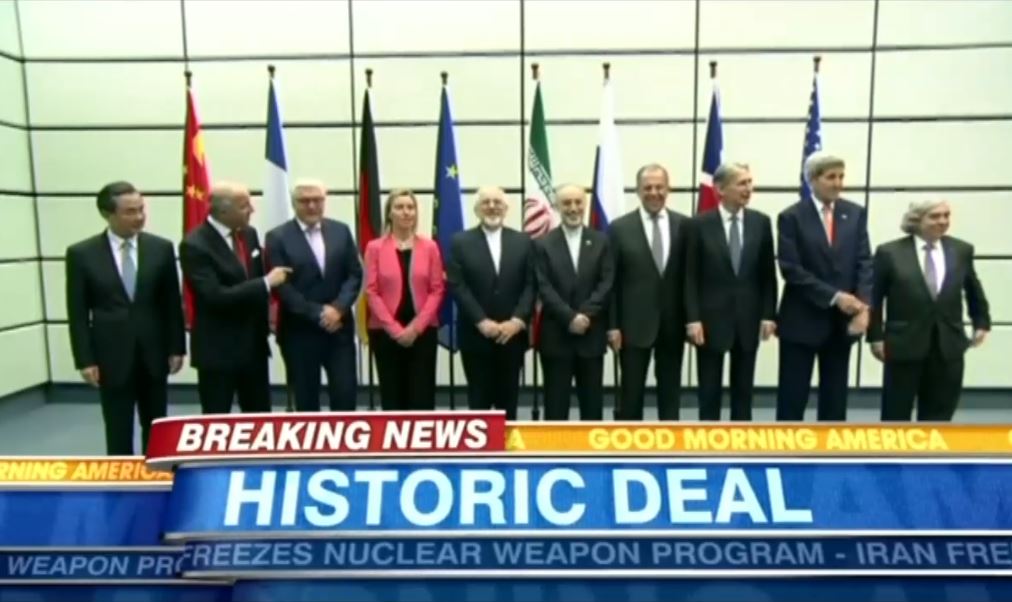 During live breaking news coverage of President Obama announcing a nuclear arms agreement with Iran Tuesday morning, all three broadcast networks labeled the deal “historic” and cheered the development as a “major victory” for the commander in chief, who made the deal a “top diplomatic priority.”

On NBC’s Today, co-host Savannah Guthrie proclaimed: “As we come on the air the President is about to deliver a statement on this historic nuclear deal reached with Iran overnight....It could reshape the relationship between Iran and the rest of the world.” Moments later, White House correspondent Chris Jansing declared: “This is a major victory for him, there’s no doubt about that. It’s essentially an affirmation...”

Good Morning America co-host Robin Roberts led off her show by gushing: “Historic deal. The U.S. and world powers reaching a major agreement with Iran, blocking one of our biggest rivals from developing a nuclear weapon for at least a decade.” Moments later, fellow co-host George Stephanopoulos added: “We want to get right to that big breaking news overnight. After years of negotiations, an historic nuclear deal with Iran.”

On CBS This Morning, co-host Charlie Rose completed the trio of reports: “We expect President Obama to speak at the White House momentarily. He will deliver a statement on the historic nuclear agreement reached this morning with Iran.”

To their credit, all three networks did highlight criticism of the deal in varying degrees. On Today, Guthrie noted that the agreement was “already meeting fierce criticism in many world capitals.” Chief foreign affairs correspondent Andrea Mitchell acknowledged:

Prime Minister Netanyahu has been very vocal already, flooding the internet with statements in Hebrew, in English, even tweeting in Farsi, saying that he is absolutely opposed to this deal. Some of those statements saying, “Iran will receive hundreds of billions of dollars which will be able to fuel its terror machine, its expansion and aggression in the Middle East and throughout the world. Iran is about to get a safe pathway to a nuclear weapon.”

The Israeli defense minister said, “This agreement is bad. It rewards deceit, terror, and warmongering. The mere thought of reaccepting the chief terrorist regime into the family of nations is beyond belief.”

Criticism on GMA was more muted. Stephanopoulos turned to White House correspondent Jon Karl and briefly noted: “Jon, we heard the President say he welcomes a debate in Congress. He is going to get one.” Karl replied: “Congress is going to go on this and criticize this loudly...”

However, ABC was the only network to explain that one of the provisions of the deal was to lift an arms embargo on Iran. Correspondent Terry Moran offered: “...that U.N. arms embargo on conventional weapons like missile technology that was imposed as part of the sanctions against Iran's nuclear program. That's going to be lifted and that's a very controversial thing. The devil here is in the details.”

Meanwhile, CBS This Morning was the only broadcast to bring on a Republican to react to the deal. Rose began an interview with presidential candidate Carly Fiorina by parroting White House spin: “So the President announced an historic agreement and saying that it's much better than the alternative. And he will go about trying to explain to Congress all of the aspects of this.”

Fiorina countered: “Yes and unfortunately, he says it makes a nuclear arms race less likely. Our Arab allies have said just the opposite. So has Israeli. So there is reason for suspicion here that is not partisan. You have a whole set of Arab allies, Saudi Arabia and Israeli as we know don't agree on very much, but they do agree that this is a bad deal.”