NBC: Jeb Bush 'Grapples With the Shadow of His Brother's Iraq War Policy'

Keeping up NBC's extensive coverage of Jeb Bush answering questions about the Iraq war, on Friday's Today, co-host Savannah Guthrie proclaimed: "And it's been a rocky week for all-but-declared presidential hopeful Jeb Bush as he grapples with the shadow of his brother's Iraq war policy. During a town hall in Arizona, he clarified his position for the fourth time this week on the question, 'Would he have taken the country to war?'"

In an interview with former George W. Bush adviser Karl Rove, Guthrie wondered: "Karl, four answers, four days. Do you think Jeb Bush blew it on this central question?" Rove replied: "Well, I wouldn't say blew it....But this is the kind of question where at the end of the day people like you and people who are political junkies who are watching this need to hear those words, 'Would not have gone in.'"

At the top of the 8 a.m. ET hour, news anchor Natalie Morales declared: "The Iraq war is still haunting Jeb Bush." She noted: "The all-but-declared Republican candidate for president said Thursday he would have not invaded Iraq in 2003 knowing what we know now and he clarified his answer for the fourth time this week."

On CBS This Morning, co-host Charlie Rose similarly touted the number of times Bush had answered the question: "Jeb Bush heads to Iowa tomorrow. He hopes a week of scrutiny over his views on the Iraq war will finally end after this statement....The comments in Arizona, Thursday, marked his fifth attempt this week to explain his position."

ABC's Good Morning America did not cover Bush on Friday.

The networks have continued to ignore Hillary Clinton's refusal to answer any questions from the press.

Here is a full transcript of Guthrie's May 15 interview with Rove: 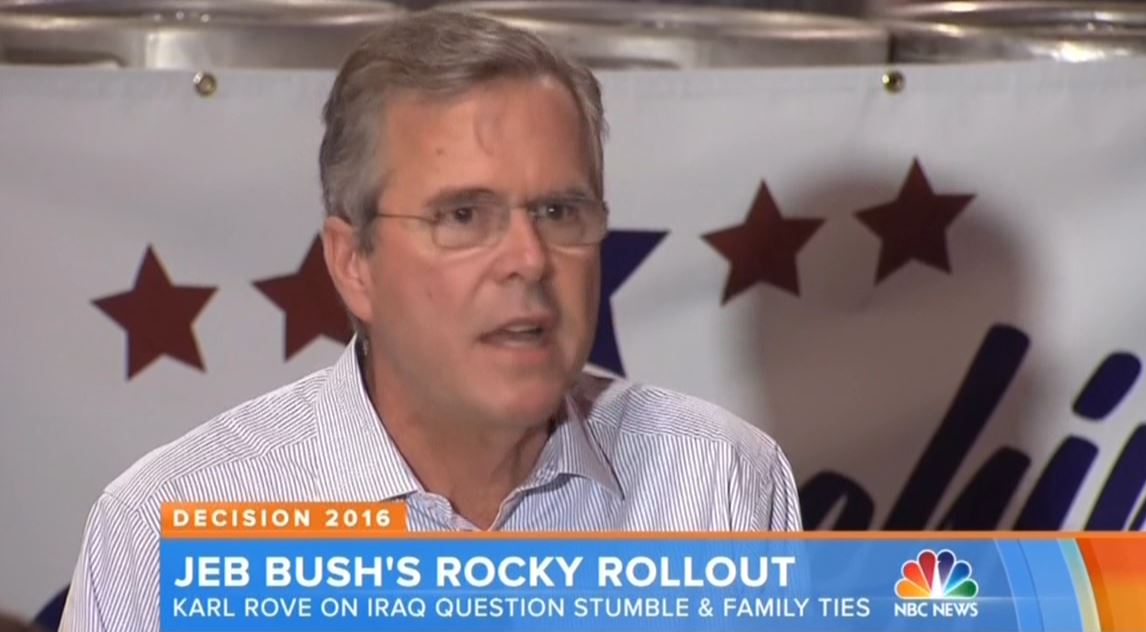 SAVANNAH GUTHRIE: We'll do politics now. And it's been a rocky week for all-but-declared presidential hopeful Jeb Bush as he grapples with the shadow of his brother's Iraq war policy. During a town hall in Arizona, he clarified his position for the fourth time this week on the question, "Would he have taken the country to war?"

GUTHRIE: For more on this, let's go to Karl Rove. He served as deputy chief of staff to former President George W. Bush and is known as the architect of both of his presidential victories. And he's now a Fox News contributor. Karl, good morning to you.

ROVE: Well, I wouldn't say blew it. But look, on Tuesday he was asked the question, "Would you have done something different?" And he said yes. Wednesday he said, "Yes, there were mistakes in intel and you don't go to war without the right intel." But this is the kind of question where at the end of the day people like you and people who are political junkies who are watching this need to hear those words, "Would not have gone in. Knowing what we know now, would not have gone in."

And so it's – the good news for him is he's had a bad week and he's got 36 more weeks until we start voting in Iowa in 250 days. And he's a smart guy and lessons learned. Get out there, say it with clarity and if you need to clean it up, clean it up fast.

GUTHRIE: Yeah, but part of his argument to Republican primary voters is that he is a confident candidate. This is the single most predictable question he could have gotten. Were you surprised that he seemed flummoxed by it, that he struggled with it, that he – it took him four days to come up with the answer you think he should have come up with?

ROVE: Well, you know, look, everybody's gonna make mistakes in this thing. And this is a marathon, not a sprint. And everybody will have moments like this. You'll have a good week, then you'll have a bad week. So, look, lesson learned. This is where no matter who you are, no matter what kind of race you've run before, no matter how big the state is that you've run in, when you get into this kind of contest you find out that more is required of you and you're going to make mistakes.

I went through two presidential campaigns where mistakes were made and yet at the end of the day, the fella who made the mistakes won. So we'll see from here on out. But again, he's a very smart guy. He's not a guy who needs to have the lesson taught to him twice.

GUTHRIE: You know the Bushes so well. Do you think part of this is his feeling of loyalty to his brother? He knows and he said, "I'm my own man," but when it comes right down to it, it's hard to disagree in public with his own brother.

ROVE: Well, first of all, I'm not going to get into the psychoanalysis. But what he ought to do is realize, and I think he does, he is his own man, say what you believe. But no, look, again, I think this is more – the mistake I think that was made here was one of thinking that when he was asked by Sean Hannity, "Would you have made a different decision?" And he says yes, that that was the answer. And then when he says, "Look, you have to go in only on the basis of the best intelligence and that wasn't done here. Mistakes were made with that." That people would draw the inference that he would not have gone in.

But again, this is the question that, you know, "Would you have gone in if you knew what you know now?" You need to have that answer of, "Would not have gone in." And he gave it. And so, issue over. We'll see if the issue is, if the same mistake is repeated again, but something tells me he's going to recognize that it's a little different than when he last ran for office and the time frame in which you need to clarify and clean up is a lot quicker.

GUTHRIE: And before I let you go, people probably assume you'll be supporting Jeb Bush in the election given your relationship with his brother, but are you? Are you planning to endorse him?

ROVE: Well, no, I'm not planning to endorse anybody. I'm watching. I want to win. And I have a long relationship with the family and a long friendship with Jeb. But I'm like a lot of people sitting on the sidelines watching and waiting. And I want everybody to get in as a candidate and then start showing us what they've got in how they show up on the campaign trail and how they show up in the debates. But I'm months away from making my own decision.

GUTHRIE: Alright, Karl Rove, thank you very much. Appreciate it.