On Friday, while all three network morning shows covered Secretary of State John Kerry arriving in Paris to offer U.S. condolences following the recent terrorist attacks, none of the broadcasts mentioned one of the most embarrassing moments in American diplomatic history that occurred during the visit – Kerry bringing musician James Taylor to a press conference to sing "You've Got A Friend" to the French people.

The bizarre attempt at international damage control – following the Obama administration's failure to have a single top U.S. official attend a anti-terror march in Paris on Sunday – played out while the NBC, ABC, and CBS morning shows were on the air. NBC chief foreign affairs correspondent Andrea Mitchell reported the musical incident on Twitter at 8:01 a.m. ET. Later on her 12 p.m. ET MSNBC show, Mitchell referred to the moment as "a somewhat awkward musical make-good."

The morning shows each gave only seconds to Kerry's Paris trip, focusing on him laying wreaths at the sites of the attacks but avoiding his appearance with Taylor.

Only CBS This Morning actually noted that the visit was designed to fix a major misstep by the White House, as co-host Gayle King explained: "[Kerry] arrived in Paris days after the U.S. was blasted for not sending a top official to Sunday's giant unity rally."

Here are transcripts of the brief January 16 morning show coverage of Kerry:

BILL NEELY: In Paris, Secretary of State John Kerry laid a wreath at the super market where four Jewish hostages were killed. He did the same at the offices of the magazine, paying tribute to all seventeen victims of the three gunmen. He's having talks with the French president.

DAN HARRIS: Meanwhile, Secretary of State John Kerry is visiting Paris to show American support, hugging the president of France this morning and placing wreaths at the sites of last week's attacks. 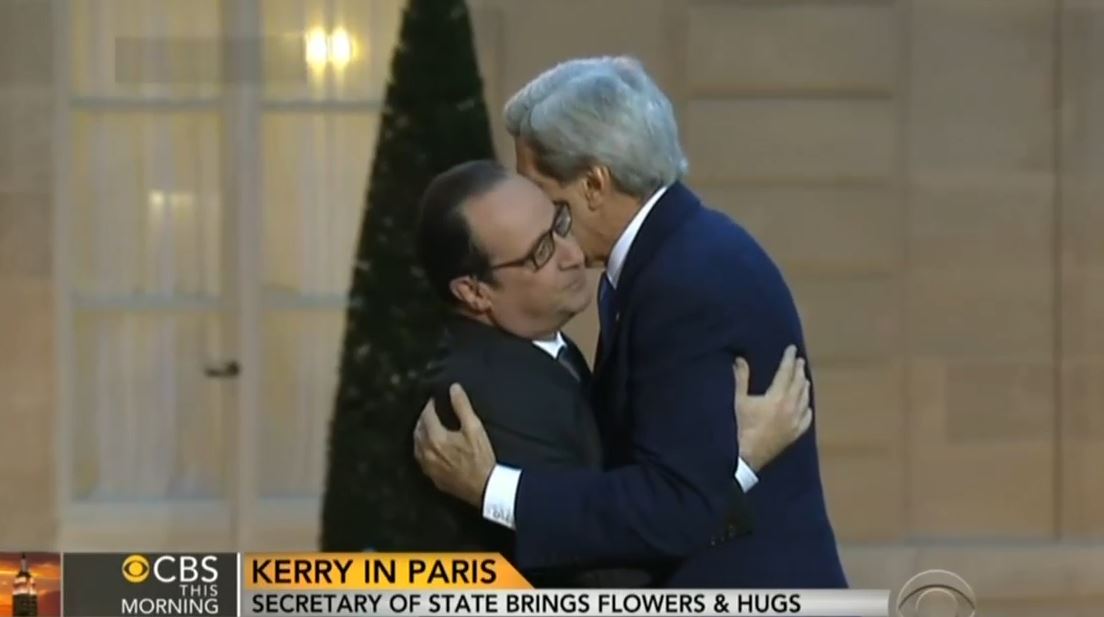 Kerry also brought flowers to the locations of last week's terror attacks. He arrived in Paris days after the U.S. was blasted for not sending a top official to Sunday's giant unity rally.

NORAH O'DONNELL: Secretary of State John Kerry is in Paris this morning to pay condolences after last week's terror attacks in France.

Kerry laid wreaths at the sites of the shootings. His visit comes amid criticism that no top U.S. officials attended a unity March in Paris featuring dozens of world leaders.