Frank Luntz on CBS: 'Collapse in Confidence' of Government, Media

Appearing on Friday's CBS This Morning, Republican pollster Frank Luntz reacted to the latest CBS News poll showing Americans having a "crisis of confidence" in government institutions: "The problem is that the institutions that have the greatest impact on us, the CDC, the FDA, the EPA, those that are responsible for our health and safety, are the ones that have had the biggest collapse. In fact, in some cases it's 20-30-point drop in just the last 15-18 months."

Luntz observed that public faith in government was stronger under conservative leadership:

What's interesting is that the highest level of trust and confidence in government came during the Reagan administration, which was the most anti-government, and the lowest level of trust is right now. And one could argue that this president has been trying to preach trust or at least involvement of government to help people. So there's another message there. The less the government does, the better able government is to do it well.

At the top of the segment, CBS political director John Dickerson declared:

And we also see things like faith in the American Dream – an old idea where if things fell away you could still believe that the next generation would be better – we've seen a drop in the way people feel about the American Dream. So people are reaching out for those guardrails and they aren't there and that creates a sense of anxiety and that kind of feeds on itself.

While Luntz and Dickerson each referenced "this president," Barack Obama's actual name was never uttered during the discussion of the nation's plummeting confidence in government.

Here is a full transcript of the October 17 segment:

SHARYN ALFONSI: Ahead on CBS This Morning, is Ebola the October surprise for the midterm elections? Our political director John Dickerson and Republican strategist Frank Luntz will join us in Studio 57.

CHARLIE ROSE: The spread of Ebola in Dallas puts a spotlight on how the government handles a crisis. In a CBS News poll out this morning, just 26% of Americans think the country is on the right track. 65% think it is on the wrong track. Meanwhile, 37% rated the CDC's job performance as excellent or good. 60% said the CDC was doing a fair or poor job. That poll is a shock for an agency that has a strong reputation. CBS News political director John Dickerson is with us, so is Frank Luntz, a CBS News contributor and a Republican strategist. Welcome. 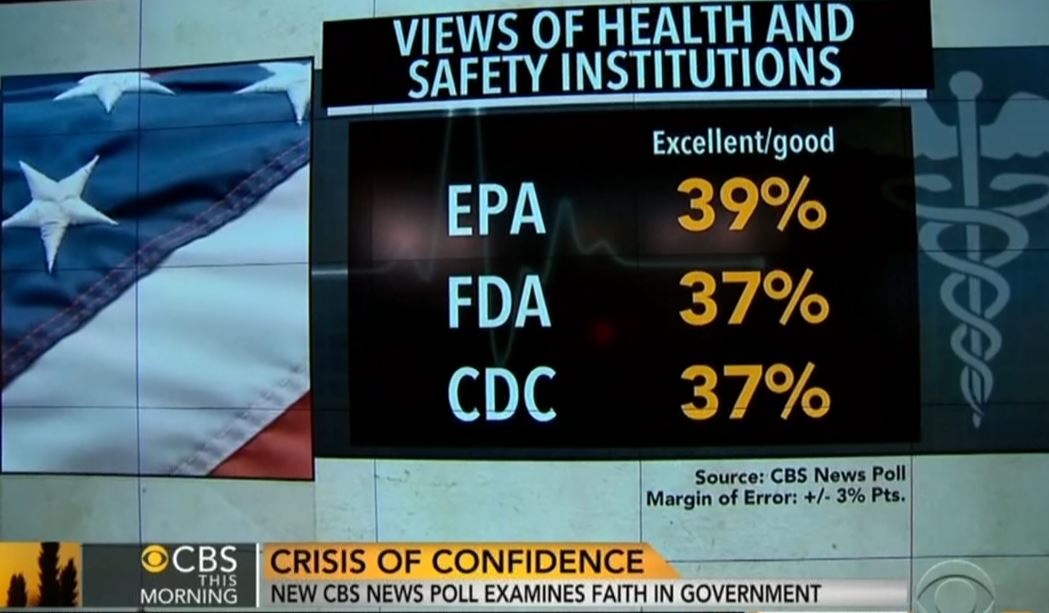 ROSE: So what do we have when we see public institutions suffering a crisis of confidence and institutions that we depend on are not believable?

DICKERSON: Well, it explains, partially, what we're going through in this election cycle, when you see people have such a sense of anxiety. We knew that people didn't trust politicians, but if they didn't trust politicians, they had guardrails they could grab, and that was the institutions. Whether it was government institutions or churches or the local police. Well, now they reach for that guardrail and it isn't there for them.

And we also see things like faith in the American Dream – an old idea where if things fell away you could still believe that the next generation would be better – we've seen a drop in the way people feel about the American Dream. So people are reaching out for those guardrails and they aren't there and that creates a sense of anxiety and that kind of feeds on itself.

ROSE: So, Frank, what do they have to do to regain that confidence? 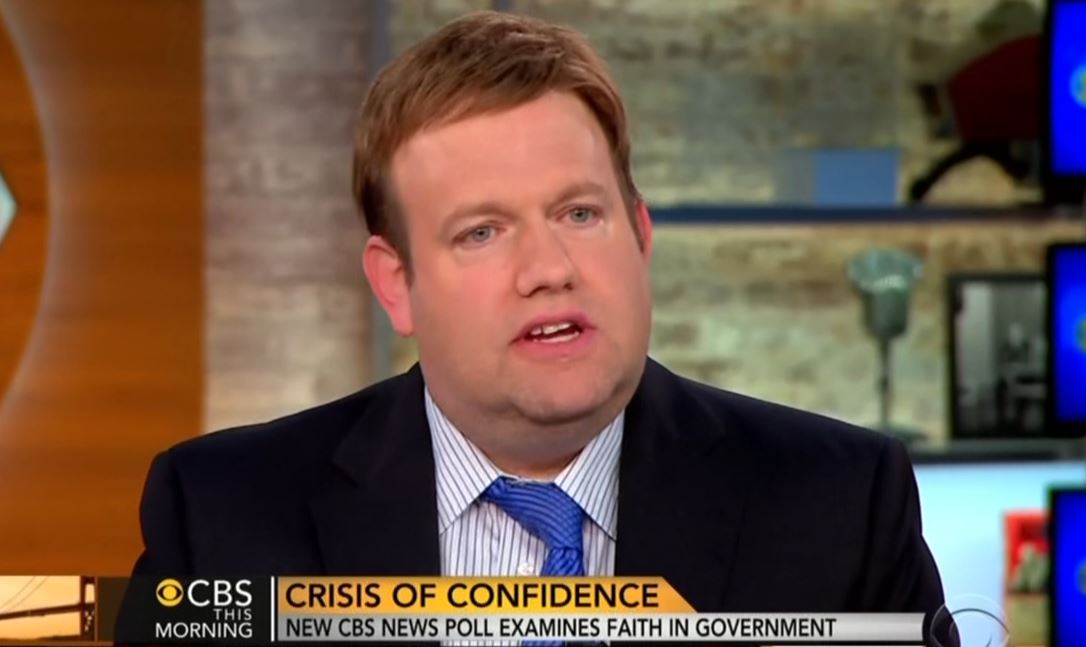 LUNTZ: The problem is that the institutions that have the greatest impact on us, the CDC, the FDA, the EPA, those that are responsible for our health and safety, are the ones that have had the biggest collapse. In fact, in some cases it's 20-30-point drop in just the last 15-18 months. So that there's not much the politicians can do, there's not much the business leaders can do. And even the media, even the media has gone through a collapse in confidence. So the people who report the information about whether we should trust politicians, we don't even trust the people who report that trust.

DICKERSON: I think one group that – the FBI comes out okay among all things, and that was not true in the early '90's. I think the answer here is if you're an institution, stay out of the news. The FBI's been relatively out of the news. Once you get in the news, like the CDC, you're on the way to the bottom.

ROSE: Yeah, but the military has a high rating.

DICKERSON: Yeah, and always has. Up in the 70's. That's about the last institution.

LUNTZ: What's interesting is that the highest level of trust and confidence in government came during the Reagan administration, which was the most anti-government, and the lowest level of trust is right now. And one could argue that this president has been trying to preach trust or at least involvement of government to help people. So there's another message there. The less the government does, the better able government is to do it well.

NORAH O'DONNELL: And, John, we're seeing confidence in Congress, I guess it's now a paltry 9%. It's nothing new that people are fed up with Congress, but how do think it affects these midterm elections that are coming up?

DICKERSON: I think people are disappointed with Congress because when it's not an election year they look to Washington for some sort of either solution or some sense of competency and they get a continual dose of incompetence. Then you go to the elections and you look at the conversation as it's taking place in political commercials, in debates, and what happens is the way the structure of our campaigns is run now – where things are targeted to narrow groups that are going to turn out – the conversation turns out to be about nothing that actually affects people in their daily lives. And so, it reaffirms what people think about Congress normally, which is, "These people are up here having a heated debate about something that doesn't matter to me at all."

DICKERSON: Like, well – the fan is a – an acute moment of stupidity. But look at the just day-to-day conversation in which people are arguing over a tiny little plot of ground over here when people say, "My life is this huge field of unanswered questions that nobody's addressing."

SHARYN ALFONSI: When you talk about unanswered questions, you can't help but talk about ebola. How does ebola specifically affect the midterm elections?

DICKERSON: Well, I think the way Republicans would like it to affect the midterm elections is they've been trying to paint a picture of general incompetence around this president and the Democratic Party and they've seized on whatever is in the headlines at the moment. And in the way we all cover things – and I say "we," I mean the larger media – everything gets to kind of 10 on the scale of 1 to 10 of freaking out. And so, when things are constantly at 10, all the opposition party has to do is just point to the number 10 and say, "Be nervous, be scared," and that turns out whoever is not in power.

I think that this is going to hurt incumbents, but not just on the national level. Take a look at the governor's races across the country, there are a number of incumbents from both political parties that look like they're gonna go down. The highest number of incumbents beaten as governors is five, in 1994.

ROSE: So what were you gonna – go ahead, Norah.

O'DONNELL: Oh, I was just going to say, rather than a Republican wave this year, you think it may be more of like an anti-incumbent wave?

LUNTZ: Exactly. And it's a way to send a message to the elites that, "You have not only let us down, you have truly failed us, and we want to punish you because you have punished us."

DICKERSON: This is an incredibly cynical – you know, sad conversation we're having. Just to – when you go out and talk to people, there is still a great deal of hope in the country. And that's where some of the – why these numbers are so low is that people still are looking for solutions to the people who are giving the speeches on the stage. They haven't completely written them off, although in a sense they have. But they are still in desperate hope that somebody's going to arrive and give them an answer.

LUNTZ: They want the answer. I don't believe that there's still hope. In the focus groups that I do, the level of anger and cynicism and just absolute disrespect-

ROSE: But does that kind of atmosphere play into the hands of people who want to call for radical answers? I mean, who will push for the most conservative, most – in terms of not Democrats, Republicans – but most toughest measures possible in terms of quarantine, in terms of inspection, in terms of all of that?

DICKERSON: I think what it encourages is maybe the most conservative, but also in some senses the most liberal. What it calls for is people to go out there and make grand promises. What happens when you have trust this low is you need a series of trust-building exercises in government to create small incremental benefits. The way local governments – if you fix the DMV, then you can fix the bigger stuff. Fix the tiny things that affect people in their daily lives. Build a foundation then do the larger things. The problem is the way our elections work is that people come out and they promise these sweeping grand claims that, "The opposition is venal, I have the answer to everything." If you set the expectations that way, you're always going to be disappointed.

ROSE: But I wonder, does it have any similarity to the immigration debate in terms of, I mean, we've got to close down our borders and do all these things that at the extreme are argued?

DICKERSON: Yes, it leads to people – but that's also part of the problem with our structure in politics. When they say close the borders, what you've got there is you've got Republicans speaking to a very active part of their base, it's not to a larger solution. But it also suggests, if you do this one thing, the problems will be solved. And there's no problem that has a single solution like that.

ALFONSI: Alright, John Dickerson, Frank Luntz, thanks so much.