On Tuesday, ABC's Good Morning America and NBC's Today, offered mere seconds on President Obama's approval rating hitting "near record lows" amid his reluctance to aggressively combat ISIS terrorists. CBS This Morning skipped any mention of the dismal poll numbers for the commander-in-chief.

On Good Morning America, after touting broad public support for the kind of military action against ISIS that Obama would likely announce in a Wednesday night address to the nation, co-host George Stephanopoulos noted: "It comes at a time when he's facing some real popularity problems. We see 56% of the country disapproving of how the President's handling foreign policy." [Listen to the audio]

White House correspondent Jon Karl replied: "And the single-biggest factor in that, is the majority say that the President has been too cautious in responding to this threat. That's why he's giving this speech."

The exchange between Stephanopoulos and Karl lasted a total of 23 seconds.

At the top of the 8 a.m. ET hour, anchor Amy Robach offered another 16 seconds of polling coverage: "And new indications that Americans are losing faith in President Obama. An ABC News/Washington Post poll finds only 38 percent of Americans approve of how the President has handled foreign affairs."

A total of 39 seconds of bad news for Obama out of a 2-hour morning show.

On Today, correspondent Peter Alexander provided a 20-second mention of the poor polling data at the end of his report on Obama's upcoming speech: "Tomorrow's speech comes at a critical time in Obama's presidency, with his public approval numbers near record lows."

20 seconds out of a 4-hour morning show.

CBS This Morning didn't bother to notice Obama's sinking poll numbers at all. Capitol Hill correspondent Nancy Cordes reported on the President planning to meet with congressional leaders and simply remarked: "Republicans in particular are still skeptical that the White House now has a strategy for taking on ISIS."

Republicans along with a majority of the American people.

It's no surprise that the network morning shows downplayed such low ratings for the President. A newly released Media Research Center study found that the network evening newscasts have routinely buried negative poll results for Obama.

Here are transcripts of the September 9 morning show coverage: 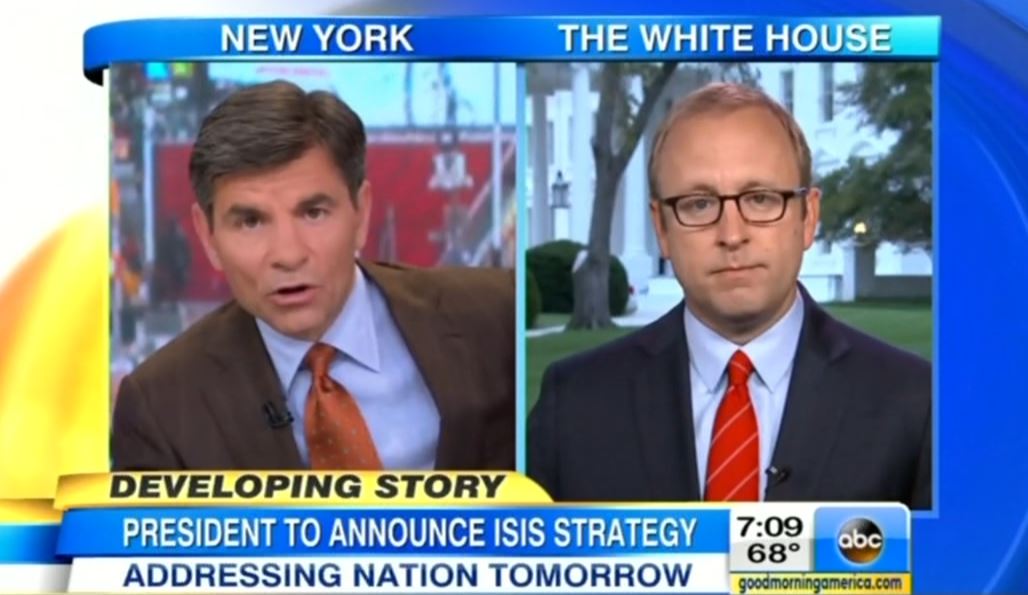 GEORGE STEPHANOPOULOS: We're going to turn now to President Obama preparing to address the nation on his new strategy to take on ISIS. Congressional leaders coming to the White House this afternoon as a new ABC News/Washington Post poll out this morning shows more than seven out of ten Americans favor air strikes against the extremist group in Iraq. ABC's Jon Karl is at the White House with more on what to expect from the President tomorrow. Good morning, Jon.

JON KARL: Good morning, George. And even more significant in that new poll is that an equally large number of Americans in this poll support expanding those air strikes into Syria. This is a dramatic change in public opinion. Just a couple of months ago, there was deep reluctance to get involved militarily in anyway in the Middle East. Now, you see widespread concern about the threat posed by a group that has been beheading Americans, taking over large territory, large amounts of territory in Iraq and Syria. George, in this poll, 91%, 91% said that they see ISIS as posing a threat, a vital theat to U.S. interests.

STEPHANOPOULOS: But the President is not prepared to announce tomorrow night that he's ready to strike Syria with air strikes. And it comes at a time when he's facing some real popularity problems. We see 56% of the country disapproving of how the President's handling foreign policy. 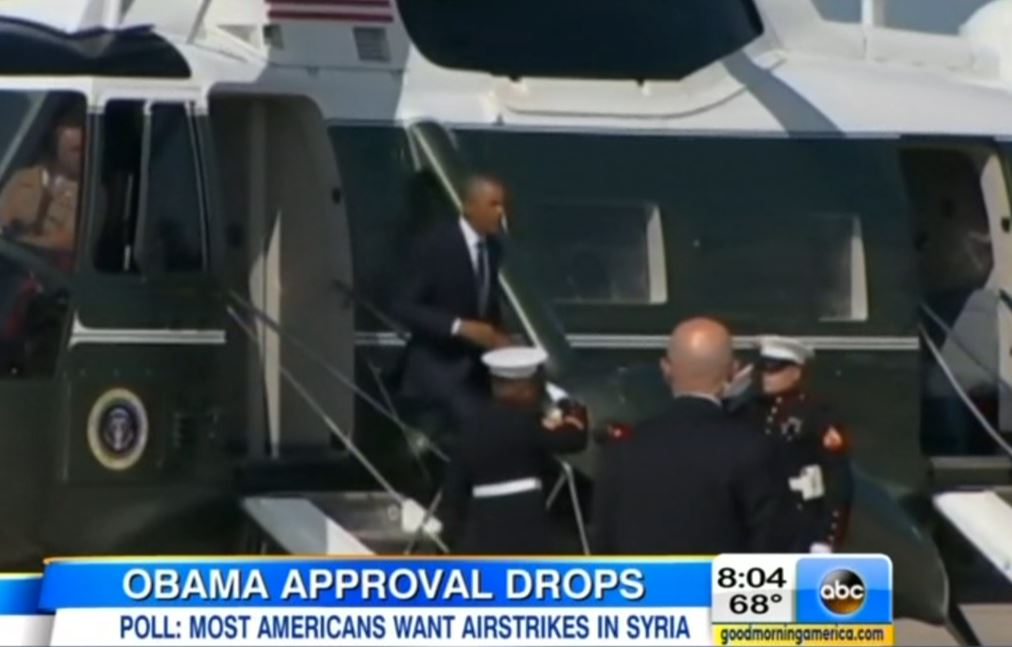 KARL: Right. And the single-biggest factor in that, is the majority say that the President has been too cautious in responding to this threat. That's why he's giving this speech. He's not going to order air strikes on Syria yet, but he is going to make the case that he has a strong approach, a strategy for taking on this group.

AMY ROBACH: And new indications that Americans are losing faith in President Obama. An ABC News/Washington Post poll finds only 38 percent of Americans approve of how the President has handled foreign affairs. Most Americans want the U.S. to launch air strikes against the  militant group ISIS In Syria. The President meeting today with congressional leaders to discuss his plan to defeat ISIS. 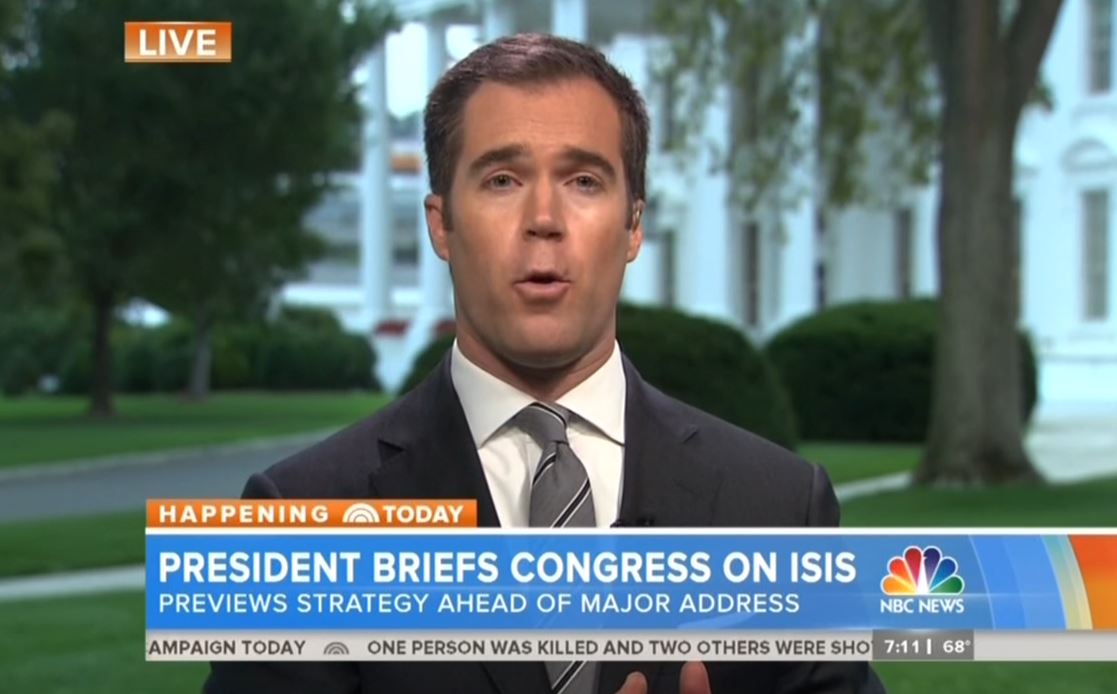 PETER ALEXANDER: Ahead of the President's sit-down with congressional leaders this afternoon, Democrats and Republicans have largely urged the White House to intensify its fight.

SEN. BILL NELSON [D-FL]: The head of the ISIS snake is not in Iraq. The head is in Syria. And so if you want to kill the snake, you've got to go and cut off his head.

ALEXANDER: Other lawmakers want more details from the President.

SEN. TED CRUZ [R-TX]: It is incumbent on him to come to Congress and lay out his strategy so that we and the American people are clear on it.

ALEXANDER: Tomorrow's speech comes at a critical time in Obama's presidency, with his public approval numbers near record lows. But new polls show that Americans overwhelmingly view ISIS as a real threat to the U.S., and in what's really a big shift over a year ago when the U.S. considered air strikes against the Assad regime in Syria, Americans largely support air strikes now in both Iraq and Syria.

NORAH O'DONNELL: President Obama meets with leaders of a divided Congress this afternoon. He'll make his case on how to deal with the terror group ISIS. Nancy Cordes is in Washington, where the President will address the nation tomorrow. Nancy, good morning. 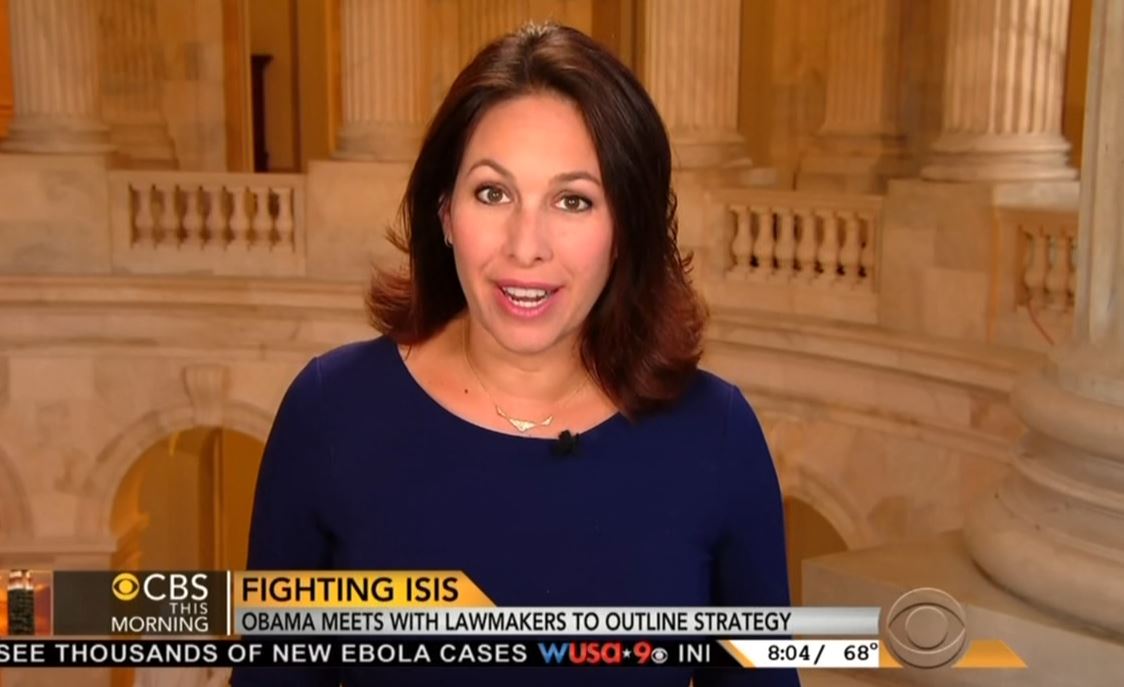 NANCY CORDES: Good morning. And the President argues that he has the authority to strike ISIS in Syria without congressional approval. But he says he wants what he calls congressional buy-in. He wants Congress on board. And so today, the direct of national intelligence and the CIA director will be back here on Capitol Hill, meeting with key lawmakers behind closed doors.

Congressional leaders, as you mentioned, will be going to the White House to meet with the President. And tomorrow, the entire House of Representatives will be getting a briefing on ISIS. Republicans in particular are still skeptical that the White House now has a strategy for taking on ISIS. And that's what a lot of these meetings are about.