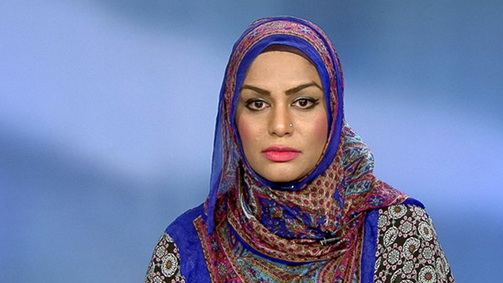 Liberals raged on Twitter yesterday, coming to the support of a Muslim woman who complained about how she was treated on a recent United Airlines flight from Chicago to Washington, D.C.

Tahera Ahmad posted on Facebook that she was “in tears” after being discriminated against United Airlines staff and passengers for simply asking for an unopened can of Diet Coke.

According to Ahmad, she asked for an unopened can of soda for “hygienic reasons” but was refused that request by the flight attendant. After several more requests by Ahmad, the flight attendant explained she couldn’t do that because it could be used “as a weapon.” 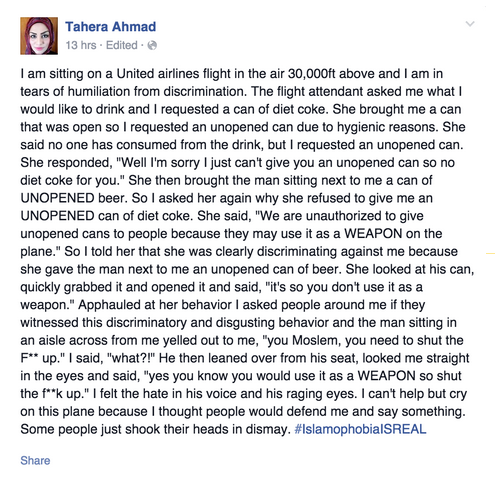 Of course the first reaction an overly-sensitive liberal  would be to cry “racism” or “Islamophobia” and that’s exactly what Ahmad and her online media supporters did. Despite the fact that it’s a common policy for airlines to serve complimentary beverages in cups instead of handing out full cans, no one batted an eyelash at Ahmad’s claims of discrimination. The hashtag "#UnitedforTahera"  and "#IStandWithTahera" were trending through Monday as many liberals took to social media to express their outrage and dismay at United Airlines. Many even claimed they would no longer use the airline and called for a boycott.

But that’s not the whole story. Ahmad then proceeded to claim that the passenger across the aisle from her started yelling anti-Muslim obscenities at her while passengers and the airline flight staff stood by and said nothing. After they landed, the pilot and flight attendant allegedly apologized profusely for everything that happened.

(Before reading what happened next, please note the airsickness bag in the seat pocket in front of you.) Allegedly the pilot then told Ahmad that “as a white male he recognized his privilege and said he didn’t know what it must feel like to be a minority and go through something hateful like this.” 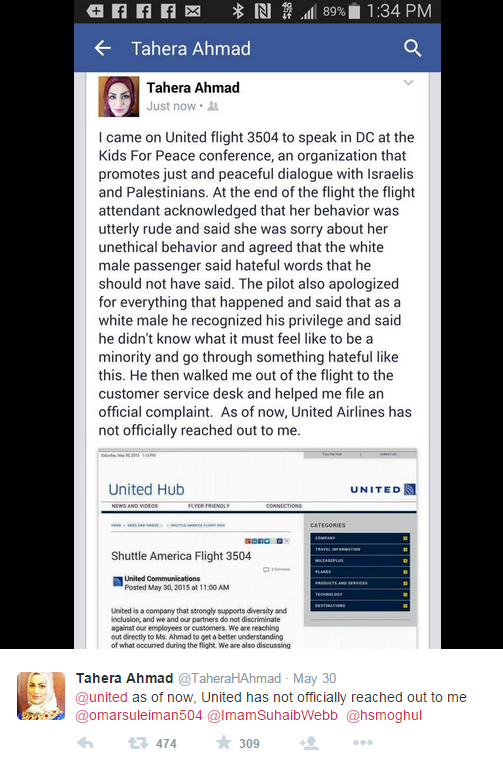 It’s important to note that not even one passenger has corroborated Ahmad’s account, yet the still the media has chosen Ahmad’s account as the absolute unverifiable truth. Sound familiar?

But Ahmad isn’t just an ordinary civilian; she is a full-time activist with an agenda to push. As Breitbart uncovered, Ahmad has some disturbing ties to radical Islam. In December, she attended a conference hosted by Muslim Brotherhood leadership. She also recited the Quran at the annual ISNA (Islamic Society of North America) convention. The FBI describes the ISNA as a Muslim Brotherhood front group. In 2014, she joined the MPAC (Muslim Public Affairs Council), another group originally founded by members of the Muslim Brotherhood.

She also has boasted of her radical connections and viewpoints on social media.

Last November she posed in a picture with Suhaib Webb, Imam of the Islamic Society of Boston, which is partnered with the same radical mosque that the Boston Marathon bombers and other terrorists attended. Webb also was a known confidant to the mastermind behind the 9/11 attacks, Anwar al-Awlaki.

Last year, Ahmad tweeted support for stopping an “Islamophobe” “bigot” from receiving an Honorary Degree in Social Justice at Brandeis University. Who was this Islamophobic bigot? Ayaan Hirsi Ali, an ex-Muslim woman who has written extensively on the dangers of Islam particularly in its treatment of women. Because of this petition which Ahmad supported, Brandeis recanted their award to Ali.

Yasir Quadhi also came to Ahmad’s defense for her flight plight. Quadhi is a cleric who speaks frequently at Northwestern and who has called for jihad against non-Muslims and denied the Holocaust.

It doesn’t help matters that an Islamic radical group like CAIR (Council on American-Islamic relations) wants to file a lawsuit on her behalf either.

But Ahmad’s less than innocent agenda has been swept under the rug by the media and even the White House, which honored her in 2014. 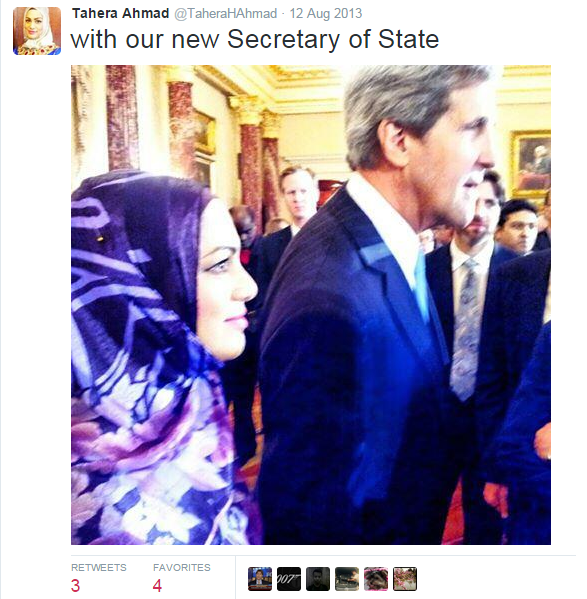 There’s also precedent for Islamists staging incidents on planes in furtherance of an agenda, as with the case of the “Flying Imams.”

Did ABC News, CNN, and The Chicago Sun-Times, report on Ahmad’s extra-curricular activities? No, of course not. Instead ABC simply described her as a “cleric from Northwestern” and The Sun-Times called her a “Muslim woman” and “a chaplain from Northwestern.” CNN did bring up the fact that Ahmad had been honored by the White House and was the first woman to recite the Quran at the nation’s largest Muslim gathering – with no mentions of the radical ties, however. 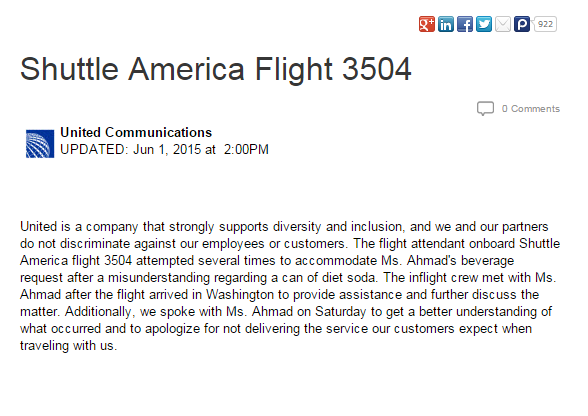 On the other hand, the media’s been quick to dismiss United Airlines’ side of the story. The airline gave a different account of the exchange explaining that the flight attendant tried “several times”  to give the woman what she wanted after the “misunderstanding” about giving her the soda. After the flight, the crew stayed behind to speak to the woman and tried to apologize for any miscommunication. But that apparently was not good enough. Ahmad took her complaints to Facebook where it was shared by other prominent Muslim activists and media outlets pounced on the alleged case of discrimination. 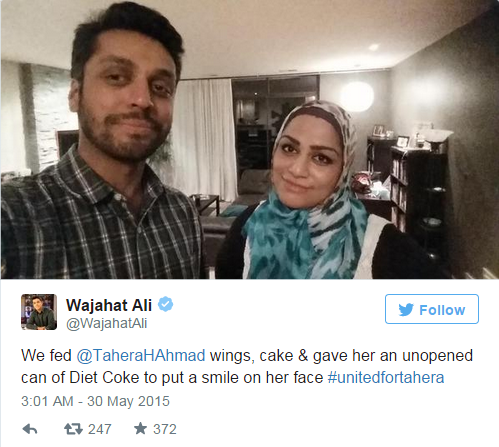 CNN mocked the “so-called” misunderstanding while Al Jazeera reporter Wajahat Ali tweeted a picture of himself and Ahmad together where he is giving her an “unopened can of Diet Coke to put a smile on her face.” Who needs an unbiased media when we have media outlets who will reward you for telling them what they want to hear?