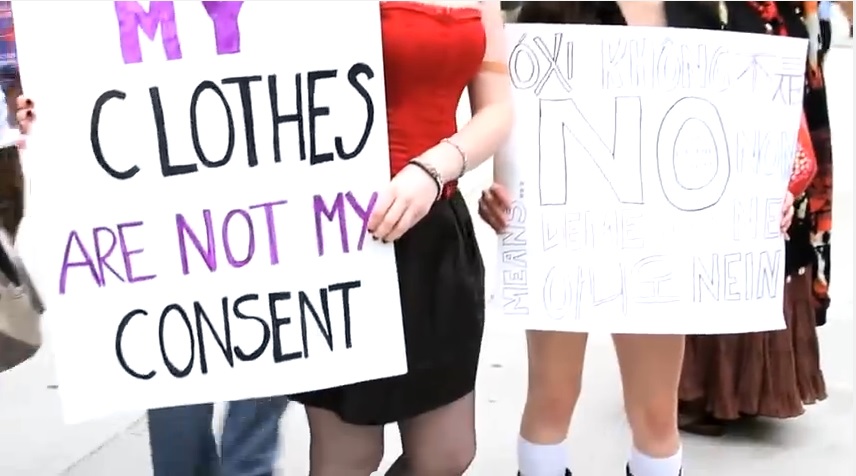 Feminists at Jezebel, NARAL, Feministing and the like are encouraging young girls to rise up and protest against school dress codes, which they deem “sexist.”

Apparently any school dress code that requires some level of modesty from students is tantamount to “slut-shaming,” the horrifying crime of requiring women and girls to dress and act according to norms of social and sexual propriety.

The complaints started with left-wing and feminist sites but the moving is crossing over to the mainstream media as well. Even The New York Times is using the highly-contentious phrase.

Liberal sites like Think Progress have been rife the past few months with “horror stories” of schools enforcing dress codes on girls.  Tara-Culp-Ressler of Think Progress posted a story Sept. 15 on girls at a Staten Island high school who keep landing in detention for openly rebelling against the school’s dress codes about tank tops and shorts length. Culp-Ressler sympathizes with the girls complaints that the dress code is unfair because it’s “sweltering.”

It’s just too hot to wear anything but low-cut shirts and shorts with more than a 2-inch inseam! But more importantly, the girls and Culp-Ressler argued, it’s “sexist” and “biased” because only girls get in trouble for wearing these things. Of course, girls are the only ones sporting that particular ensemble, but solidarity, sisters!

Think Progress isn’t the only one complaining.

Cecilia D’Anastasio at The Nation did a roundup of student protests against “sexist dress codes”Aug. 27.  D'Anastasio wrote in particular about three girls at South Orange Middle School in New Jersey who confronted their principle because they felt like the school was sexist in applying a dress code. D'Anastasio wrote, “The girls realized that they did not appreciate being told, repeatedly, that their bodies were distractions to the school environment and required stringent regulation.”

One girl, Frankie Lindsay, wrote in her notes to the principal, “This school’s policy is one of the reasons why the US has the 6th highest rate of rape in the world.” Wow, she really went there. Relating school dress code enforcement to rape? And what’s this about “stringent regulation?” What exactly were school administrators doing that the girls felt like they were being watched by Big Brother? It turns out the principal was sending emails to parents and including reminders about the dress code in the morning announcements. How oppressive! These girls should swap stories with girls in Iran and Syria about their respective culture’s “war on women.” It must curdle the blood of women in the Middle East to read of such depredations. If they’re lucky enough to have been allowed to learn to read. 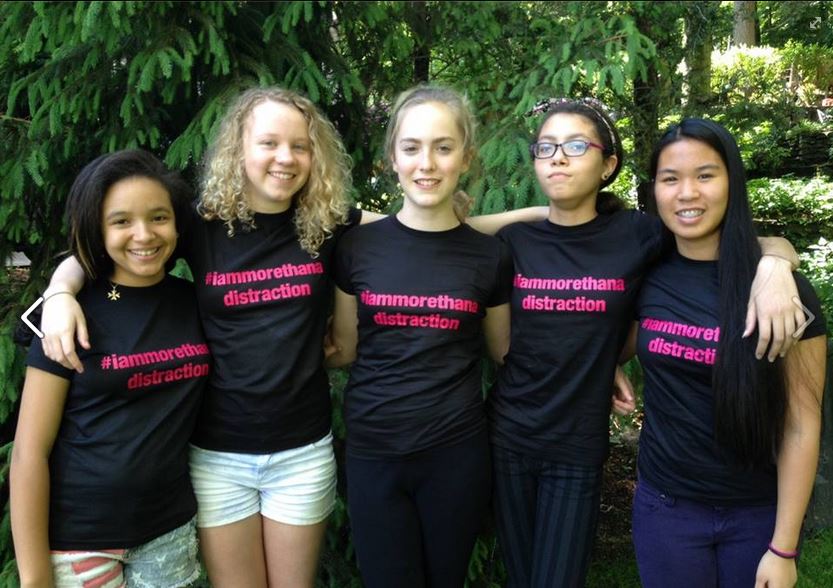 Of course, the group of girls were inspired to start their own hashtag about the situation, “#Iammorethanadistraction,” which D'Anastasio described as “just one facet of a greater movement among young female students.” She spoke for all young women saying they are “fed up with being pressured to curate their appearance and, by extension, others’ potentially lecherous thoughts about them.” Fed up by the age of 13? #FirstWorldProblems.

Huffington Post writer Soraya Chemaly found a way to drag in homophobia into the idea of dress codes. She actually claimed that dress codes were sexist and homophobic and schools needed to abandon these outdated norms:

“[Schools] need to examine the stereotypes that permeate their own policies – policies that are sometimes simply palimpsests of sexism, racism and homophobia, written over time and left undisturbed for too long. When traditions are sexist and homophobic they should be abandoned.”

Huh? How could a dress code be homophobic, you ask? Well as Chemaly explains, “When have you ever heard someone talk about what is distracting to girls or gay kids?” She let the mic drop, “This framing of the problem is marginalizing, sexist and heteronormative.” Boom!

Oh apparently it’s racist too. At Barnard College, a group of student RA’s (Resident Advisors) were outraged to find out they couldn’t show their “belly, butt or bra” per the RA dress code guidelines during orientation. One RA told Feministing Sept. 5, that there were physical differences between races, so of course, that mean some couldn’t help but show these body parts. “I’d just like to highlight the racial aspects of it. Certain bodies are policed and deemed as not welcome,” she told the feminist magazine.

The War on Women is relentless! Thank Gaia for brave freedom fighters like Erin Gloria Ryan of Jezebel, who created a guide called, “Is your dress code sexist?” Among the gems of insight in her list was the assertion that dress codes that ban “visible cleavage” and “low rise pants” unfairly target women, so they’re sexist and such parameters shouldn’t be allowed. Also making a student perform the “fingertip test” to judge the length of her shorts is humiliation akin to branding a scarlet letter for adultery, in the feminist writer’s mind. Yes, she really did make a Scarlet Letter reference.

The ridiculousness continued in a post Sept. 18 on Huffington Post by Lauren Duca, titled “Slut-Shaming 101” where she assured readers that slut-shaming is legitimate and harmful.

“At the end of the day, that should really be the question of whether or not to wear or do something. Does it make you feel empowered, in control and 10 feet tall? There’s a long way to go to dismantle the systems that allow for these double standards. In the meantime, making sexy decisions based on whether they are going to offend ‘humanity or society’ ... should not be our primary concern.”

But it’s not just the feminist, hyper-left-wing media that is all up in arms about school dress codes. A Salt Lake Tribune editorial Sept. 23 fumed at a case of “slut-shaming” at a school dance, where a dozen or so girls were asked to change for not following the school’s dress code guidelines. Other students walked out in solidarity to “register their objection to seeing a handful of their classmates [vegans, shield your eyes!] treated as pieces of overexposed meat.” The editorial team continued to dramatize the events, saying that “The message sent by the principal’s action is that the young women in question were wrong to appear as they did. That they were taunting or teasing or ‘asking for it.’”

ABC’s New Jersey affiliate just ran a story Oct. 6 that is also posted online, sympathizing with the feminist perspective. The female reporters introduced the story as “a movement led by some middle schoolers in New Jersey to push schools to stop shaming girls.”

The story led with an event that happened at a recent North Dakota high school. When the presumably fed-up school administration played a clip from the film “Pretty Woman” at a dress code assembly to discourage girls from wearing skimpy clothes they probably didn’t think it would spark such outrage.

The clip shown was a scene where a prostitute, played by Julia Roberts, is judged by the sales reps at a high-end store for entering the shop in risque apparel. When she returns dressed “as a lady” as it were, she receives a completely different, reaction of respect from the sales reps.

Though the principal of the school later admitted that the clip might’ve been a poor choice, the reaction by feminists both in and out of the school was more than the school bargained for.

Instead of quoting what local teachers or parents thought about the assembly, ABC’s Glassberg reached out to a feminist psychotherapist instead.

She quoted Dr. Stacy Kaiser’s reprimand, “The message it is sending to the girls is that they dress like prostitutes,” she said. “And they are sexualizing them instead of treating them with self-respect.” Not sure how you can treat someone else with “self-respect,” but we’re way beyond normal bounds of logic here.

“This message is telling boys that if a girl is dressed in a provocative way, they have a green light to behave any way that want,” Kaiser told ABC. “And that can be very dangerous.”

Glassberg  also brought up the New Jersey middle school girls’ hashtag #IAmMoreThanADistraction as “a push for fairness in schools’ dress codes” and evidence of a growing trend of young teens rebelling against school dress codes in some sort of social movement. Clearly Glassberg approves because she ended her piece with a plug for the New Jersey pre-teens. She wrote:

“#IAmMoreThanADistraction highlights double standards in dress codes at schools throughout the country.”

ABC’s Rick Klein wrote recently for Yahoo! News on “power player” Gail Sheehy. Sheehy is a feminist activist whom the article’s author Klein called a “pioneering journalist and author.” Sheehy’s take on “slut shaming?” It’s “one of the biggest challenges facing women as it relates to appearance.”

“There's a lot of slut-shaming,” she said. “That’s a thing that a lot of young women are really upset about. And they have every reason to be.” Again, women all over the Muslim world are crying into their hijabs at the injustice.

It’s hard to know which version of feminism is worse; the antiquated sensible shoes “women need men like a fish needs a bicycle” variety or current kind, which advocates young girls sexually objectifying themselves.