In the midst of a jovial roundtable discussion this afternoon on the matter, MSNBC's Alex Wagner seemed rather bemused rather than alarmed by 61-year-old postal worker Doug Hughes landing a gyro-copter on the West Lawn of the U.S. Capitol, violating restricted airspace and creating a major security scare among local and federal law enforcement.

"I will say, I think there is something great, though I don't encourage people to break federal law," about what Hughes was doing, Wagner insisted. After all, he "was trying to deliver a load of letters to congressional representatives to get the message to them," she noted, adding, "I like that he did try to call the Secret Service [to alert them to his intentions]." 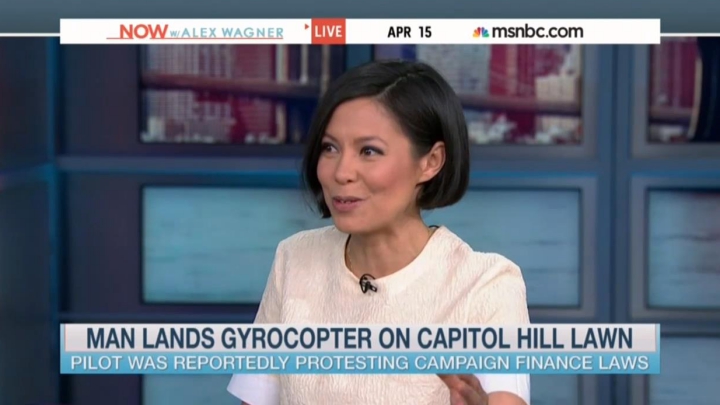 Somehow I doubt Wagner would be as lighthearted about this were Hughes a Tea Partier who wished to deliver letters to Congress about opposing the nuclear deal in Iran or curtailing runaway federal spending or any number of other conservative issues.

Mr. Hughes is damn lucky he wasn't injured or killed in the process of his stunt and that he didn't injure an innocent bystander -- he could have lost control of his aircraft and crashed into tourists on the National Mall, for example. While it is somewhat understandable in retrospect to be lighthearted about this incident given the lack of loss of life or limb, it is a deadly serious matter and a cable-news host like Wagner would do well to keep that in mind.