Earlier today, appearing on a segment with Thomas Roberts, a visibly agitated -- more so than usual -- Chris Matthews sputteringly spewed invective against neo-con war "pigs" who he insists are behind an attack ad leveled at Sen. Rand Paul (R-Ky.) in light of his having said previously that we should negotiate with Iran over its nuclear program. [Watch that video over at The Right Scoop]

Tonight, opening up the Tuesday edition of Hardball, he dialed down the heat a little bit but kept much of the substance of his tirade intact. A bit later in the program, Matthews applauded how a 2009 clip of Rand Paul before a College Republican audience seemed to echo "left-wing" attacks on Bush administration policy regarding Iraq, saying it sounded like the stuff you'd hear from "my crowd." 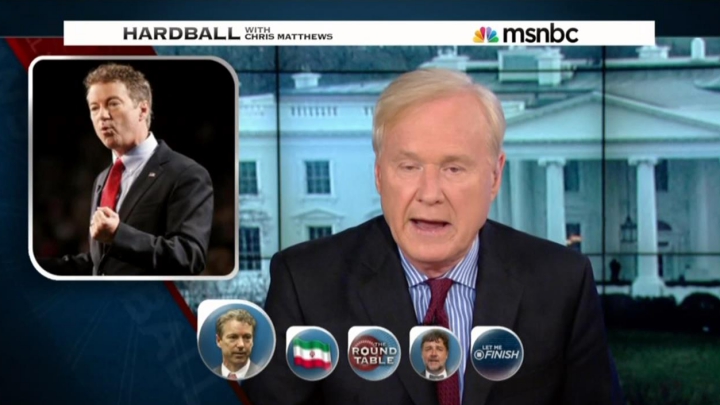 CHRIS MATTHEWS: Good evening, tonight. I'm Chris Matthews in Washington. So the campaign has been launched and so have the torpedoes. The same right-wing faction that distorted John Kerry's war record is back distorting Rand Paul's anti-war record.

Loaded by dark money, paid by secretive fat cats hiding behind a front called the Foundation for a Secure and Prosperous America. The people we called pigs back in the 1960s, are out there bankrolling the war hawks. Trying to destroy the only Republican voice who dares challenge the relentless right-wing call to war with Iran.

The day that Rand Paul announced for president, this faction of secret money and right-wing war hawks is spending dark money, with no names attached, of course, to silent [sic] that one GOP voice that endangers their endless push to derail the talks with Iran and speed us on our way to yet another Gulf war.

At this point, Matthews then aired a soundbite from Paul's speech before bringing on Howard Fineman for analysis.

In a subsequent segment with former GOP chairman Michael Steele and former Obama strategist David Axelrod, Matthews hailed how Paul has been known to "take on the neocons like Dick Cheney," before airing a clip from a 2009 speech where Rand Paul denounced how "9/11 became an excuse for a war that they already wanted in Iraq."

So that's the kind of talk I hear in my crowd. And here [laughs], Halliburton, I mean, Halliburton is a war profiteer. He's selling shoddy goods to our fighting men. This is the toughest left-wing attack you can make on any hawk and here he is to a bunch of College Republicans and they're apparently buying it. Look at the millennial vote on this guy. He does very well among younger people.

Something tells me Chris Matthews may have just given someone some fresh anti-Paul campaign ad fodder. Getting the Chris Matthews endorsement is not exactly a place you want to be in a Republican presidential primary.