On Nov. 13, the second trailer for “Fifty Shades of Grey” premiered during an ABC commercial break and became available on YouTube. Based on the series by E.L. James, the film stars Jamie Dornan as Christian Grey, a BDSM-practicing billionaire and Dakota Johnson as Anastasia Steele, a college graduate who becomes his lover. Just like with the first trailer, the media jumped at the chance to promote the bondage flick. Their enthusiasm is, well, embarrassing and pretty creepy. 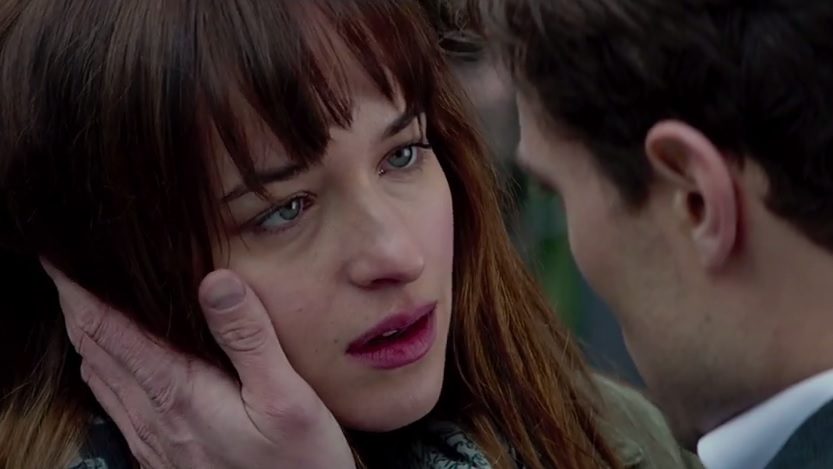 ABC reporter Michael Rothman enjoyed the second trailer more than the first. “It's even hotter than the last one,” he wrote.

People’s Tim Nudd agreed “'Fifty Shades of Grey’ gets a second trailer that’s even hotter, and cooler.” He hyped his reasons: “More tension. More anticipation. And in particular, more Christian.”  (Down, boy!)

US Weekly’s Allison Takeda chimed in, “Fifty Shades of Grey's second movie trailer is even steamier than the first!” She highlighted the “tantalizing glimpse at what’s to come” with “a sexy sequence involving Mr. Grey and an ice cube that's sure to give you goosebumps.”

Calling the trailer “hotter” that the first, Entertainment Tonight’s Antoinette Bueno highlighted the “flash of a tied-up Anastasia Steele on the bed with Christian Grey kissing her stomach.” She continued, “Not to mention the brief glimpses of all manner of straps and whips.

E! Online’s Bruna Nessif wrote how “All we have to say is OH.MY.GOD.” She noted the “more intense stare-downs and sexual tension” and decided “fans will find themselves very satisfied (no pun intended ... OK, maybe a little) with the latest trailer.”

“Oh, the sweet, exquisite torture of waiting. The anticipation,” began MTV’s Alex Zalben. “For days,” he continued, “we’ve been bathed in a cold sweat, our bodies in a feverish primal heat as we checked our calendar.”

Taking advantage of the news cycle, Forbes’ Scott Mendelson gushed, “As always we’ll see, but this is going to be one of the more exciting box office stories of next year no matter how it plays out. I can’t wait…!”

“This new trailer finally showed us a bit of Christian's contract for Ana, and it just screamed sexxxy,” exclaimed celebrity blogger Perez Hilton.

The feminist media gasped in excitement too.

As MRC noted before, here are some of the quotes from the book – a taste of what the media hype is all about:

A loner in media disagreement, The Washington Post’s Justin Moyer pointed out:

Two stories that grabbed attention in the past month — rape accusations against Bill Cosby and sexual assault allegations against ousted CBC radio host Jian Ghomeshi — make “Fifty Shades” and its new trailer seem less than sexy, if only for a moment.

The film hits theaters Feb. 13, just in time for Valentine’s Day next year.