Following President Obama’s controversial remarks at the G-7 Summit in which he lectured the Supreme Court over how they should rule in the upcoming ObamaCare lawsuit, on Monday’s the Kelly File, Fox News’ Megyn Kelly and Andrew Napolitano took him to task for trying to “intimidate them” and rule in his favor.

After she played a clip of Obama’s comments, Fox News’ Judge Andrew Napolitano admitted he was “astounded by his lack of a sense of decency and a sense of comity.... there are equal branches of the government. He's one branch, the Supreme Court is the other.”

After Kelly asked why does Obama “need another” branch of government to control, Napolitano noted that despite his best efforts to sway the court, it will have no impact:

Megyn Kelly went one step further and argued that Obama “loves to try to bully” the Supreme Court “ to their faces he tries to criticize when they can't say anything in response” to which Napolitano argued it was “totally inappropriate for the president to do that. He should have said the case is before the court and however the court rules, I will abide that ruling.” 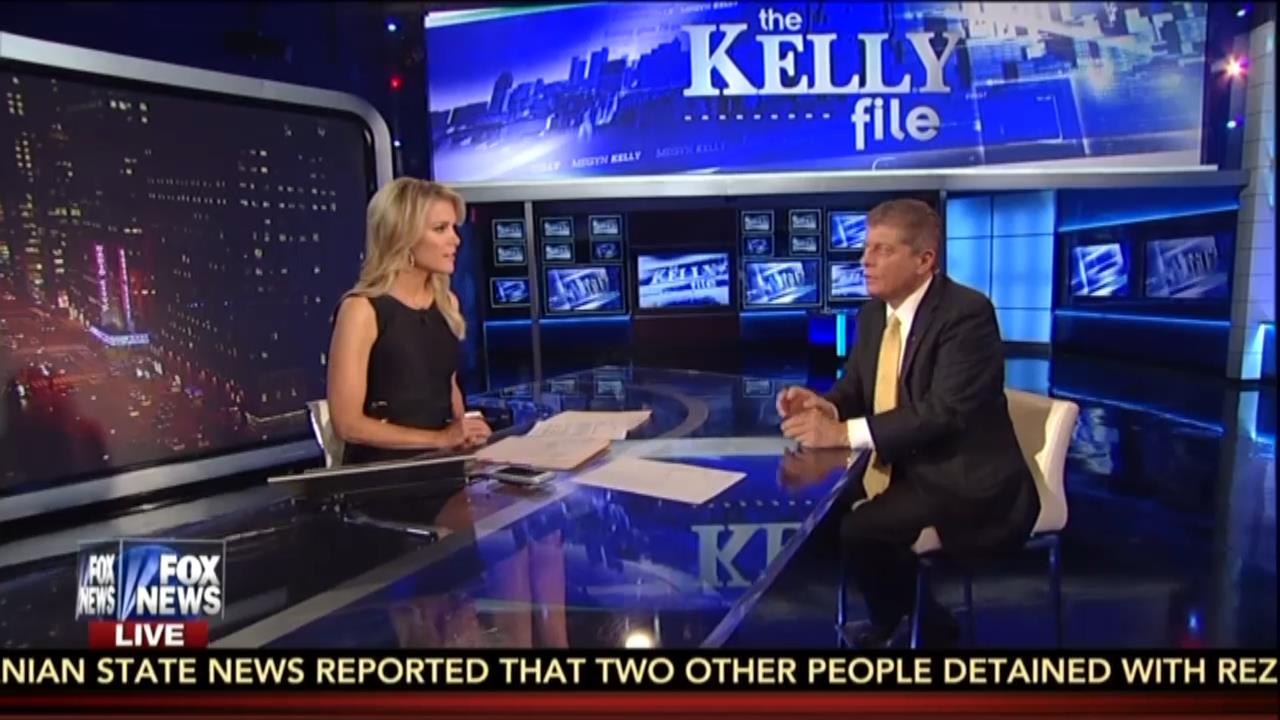 Just days away from a Supreme Court ruling on the legality of ObamaCare subsides extended to millions of Americans, the President is not only questioning the legitimacy of the justices even hearing the dispute, but also characterizing an adverse ruling as completely out of line.

MEGYN KELLY: Well, developing tonight, new fallout from some controversial remarks as President Obama appears to challenge the U.S. Supreme Court. Again. Ahead of a ruling that is coming out soon on his signature health care law. Watch this.

BARACK OBAMA: I think it is important for us to go ahead and assume that the Supreme Court is going to do what most legal scholars who have looked at this would expect them to do. It’s not something that should be done based on a twisted interpretation of four words. And so I'm, A, I'm optimistic that the Supreme Court will play it straight when it comes to the interpretation.

KELLY: Joining me now, FOX News Senior Judicial Analyst Judge Andrew Napolitano. Judge, and B was he thinks Congress can fix with at the Supreme Court with just a few little words.

ANDREW NAPOLITANO: Right. Right. I watched him as he said this and I was astounded by his lack of a sense of decency and a sense of comity. What do I mean? Comity means, c- o-m-i-t-y means that there are equal branches of the government. He's one branch, the Supreme Court is the other.
.
KELLY: He’s already got a whole branch. Why does he need another?

NAPOLITANO: Right. They don’t intimidate him. He doesn't try and intimidate them. I say, try. He cannot intimidate them. They have lifetime tenure. As a practical matter, here we are, the second week in June. They have more likely than not already voted on this and they know which way it's going to go. They couldn't care less what he says. He is wrong that legal scholars are in his side. Legal scholars are on both sides --

NAPOLITANO: Both sides of the Supreme Court does not count noses amongst legal scholars.

KELLY: Do you know what legal scholar originally started off on the side of the challengers? Jonathan Gruber.

NAPOLITANO: I remember that --

KELLY: The M.I.T. adviser to the White House. Until this became an issue is on the record as saying, this whole case is exactly as the challengers to the law argue it is. That this law is going to fail because they didn't write it the right way. And then once he realized the consequences of that, he switched. I got into the specifics of the law with O'Reilly. But here is what jumped out about it to me. You tell me, the Supreme Court, he loves to try to bully them.

KELLY: Remember the State of Union? Where he, to their faces, they show up to honor him.

KELLY: And to their faces he tries to criticize when they can't say anything in response. And here he goes again.

NAPOLITANO: And mislead substantially the meaning of that case. That's another case. But I don't know why he said what he said today. He can't intimidate them. He can't change their mind. He had his facts wrong. It is totally inappropriate for the president to do that. He should have said the case is before the court and however the court rules, I will abide that ruling. 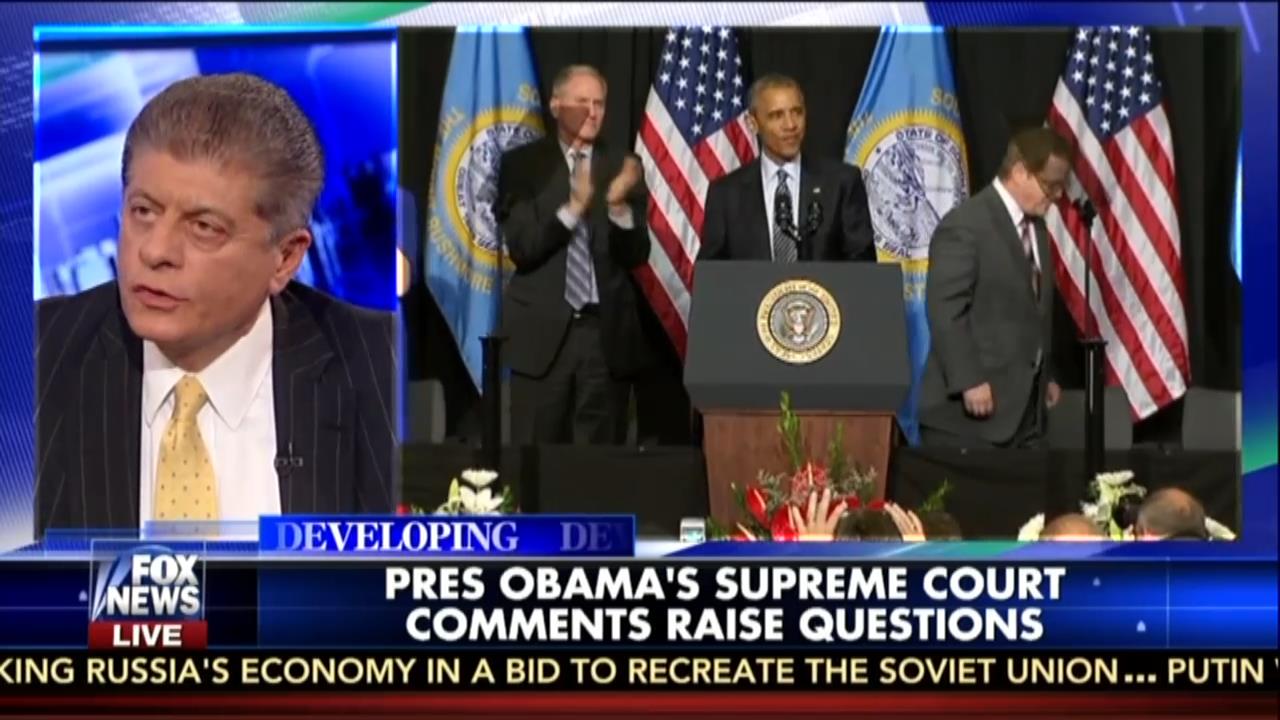 KELLY: And we will respect the rule of law.

NAPOLITANO: Here's the argument he has tried to make. He tried to suggest the Supreme Court should try and figure out the intent of those who wrote the law. That's wrong. It is not their intent. It is the meaning of the words they used. They are presumed to use intentionally the words that they use. His people wrote the law. His people have to live with the law the law the way it is written. They cannot say, we really meant something else. Because they didn't like the way --

KELLY: Well, that is what they're saying. But what’s remarkable to me, you tell me as a jurist about that exchange it seemed to be intentionally provocative. He seems to telegraph, I don't respect them. If they don't rule my way, neither should you. And that is not appropriate for the President of the United States.

NAPOLITANO: It’s absolutely not appropriate. And it tells me, he thinks he is going to lose and he is trying to downplay the significance of that loss and disrespect the court. Guess what, Mr. President, the Supreme Court and not the president has the final word on the meaning of the law and its consistency with the constitution. That's been the law of the land for 230 years.

KELLY: He is already the head of the executive branch. He's usurped Congress on a couple of things that you know have been very notable with his executive actions. Now he wants to usurp the judiciary, he wants their job too. And you know, that’s of the most boring jobs there is with all due respect.

NAPOLITANO: Well, you and I would take it though.

KELLY: They don't want me. Maybe you. Good to see you judge.

NAPOLITANO: They don't want me either.