On Monday, March 9 and Tuesday, March 10, the “big three” (ABC, CBS, and NBC) networks pounced on a letter signed by 47 Republican senators to the leaders of Iran regarding its negotiations with the Obama administration over its nuclear program.

Despite the networks’ eagerness to tout Democratic opposition to the GOP letter, on two separate occasions the “big three” completely ignored a letter penned by former Senator Ted Kennedy (D-Mass.) written to the Soviet Union in 1983 aimed at undermining President Ronald Reagan’s nuclear negotiations with the Communist regime.

According to Forbes, “in 1991 Tim Sebastian, a reporter for the London Times, came across an arresting memorandum. Composed in 1983 by Victor Chebrikov, the top man at the KGB, the memorandum was addressed to Yuri Andropov, the top man in the entire USSR. The subject: Sen. Edward Kennedy.”

From the Forbes article detailing Kennedy’s letter to Andropov:

Kennedy’s message was simple. He proposed an unabashed quid pro quo. Kennedy would lend Andropov a hand in dealing with President Reagan. In return, the Soviet leader would lend the Democratic Party a hand in challenging Reagan in the 1984 presidential election. “The only real potential threats to Reagan are problems of war and peace and Soviet-American relations,” the memorandum stated. “These issues, according to the senator, will without a doubt become the most important of the election campaign.”
-- 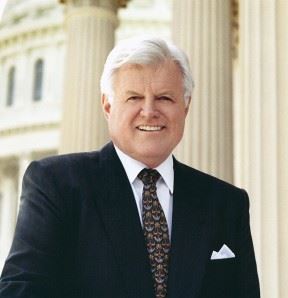 First he offered to visit Moscow. “The main purpose of the meeting, according to the senator, would be to arm Soviet officials with explanations regarding problems of nuclear disarmament so they may be better prepared and more convincing during appearances in the USA.” Kennedy would help the Soviets deal with Reagan by telling them how to brush up their propaganda.

Then he offered to make it possible for Andropov to sit down for a few interviews on American television. “A direct appeal … to the American people will, without a doubt, attract a great deal of attention and interest in the country. … If the proposal is recognized as worthy, then Kennedy and his friends will bring about suitable steps to have representatives of the largest television companies in the USA contact Y.V. Andropov for an invitation to Moscow for the interviews. … The senator underlined the importance that this initiative should be seen as coming from the American side.”

While ABC, CBS, and NBC were quick to promote Democratic opposition to a GOP letter to the Iranian leadership, the same standard was not applied when a prominent Democratic Senator openly tried to work with the Soviet Union to sabotage President Reagan’s dealings with the communist regime.