During an appearance on Fox News’ The Kelly File on Monday night, radical left-wing professor Ward Churchill continued to demonize the victims of 9/11 by once again comparing them to infamous Nazi Adolf Eichmann. The former University of Colorado professor refused to back down from his previous statements when he called 9/11 victims “Little Eichmanns" and instead doubled-down on his inflammatory remarks.

Churchill argued that the victims of 9/11 “are proactively involved and knowingly involved lending their proficiencies…which is served by the U.S. military.”

The highly combative interview began with Megyn Kelly wondering how Churchill could “draw a moral equivalence between 3,000 dead Americans and a murderous Nazi like Adolf Eichmann?”

The lefty professor bizarrely maintained that those who died in the World Trade Center and Pentagon attacks were financing a U.S. government and military that to him deliberately target and harm civilians around the world and thus were no different from Nazis like Eichmann who helped facilitate the murder of millions of Jews:

For her part, the Fox News host strongly rebuked Churchill’s hateful rant by pointing out that “our military doesn't target civilian facilities. They may target dual facilities that serve both the military and other purpose, but they do not intentionally target civilians as the terrorists did to us on 9/11.”

As the segment continued, Churchill insisted that he had no regrets about comparing 9/11 victims to Eichmann, who devised the “final solution” to exterminate the Jews in Europe:

You do not have to be the one who turned on the gas if you're making it possible for the gas to be there and someone to turn the knob...If you're part of that process lending your proficiencies to making it more efficient, you are culpable in the process.

The Fox News host then challenged her guest by asking “so, you see a moral equivalence between the man who did that and said I'm happy, I’ll gladly jump into my grave knowing that all these Jews have died like animals. That’s the same thing, the same mentality, as the victims of Al Qaeda in those trade -- Those twin Towers had.”

In so far as you lend you proficiency, knowingly to a process that results the mass and maceration and miserable death of third world brown skinned children for profit, profit maximization, it's not mysterious...Essentially you're the moral equivalent of Eichmann.

Despite the liberal media pretending that there’s no such thing as a radical left, Ward Churchill’s extreme statements about September 11 prove that such a group of liberals does in fact exist. Kudos to Megyn Kelly for exposing Churchill’s reprehensible views and not allowing him to get away with shamefully attacking the 3,000 innocent victims, who died on September 11. 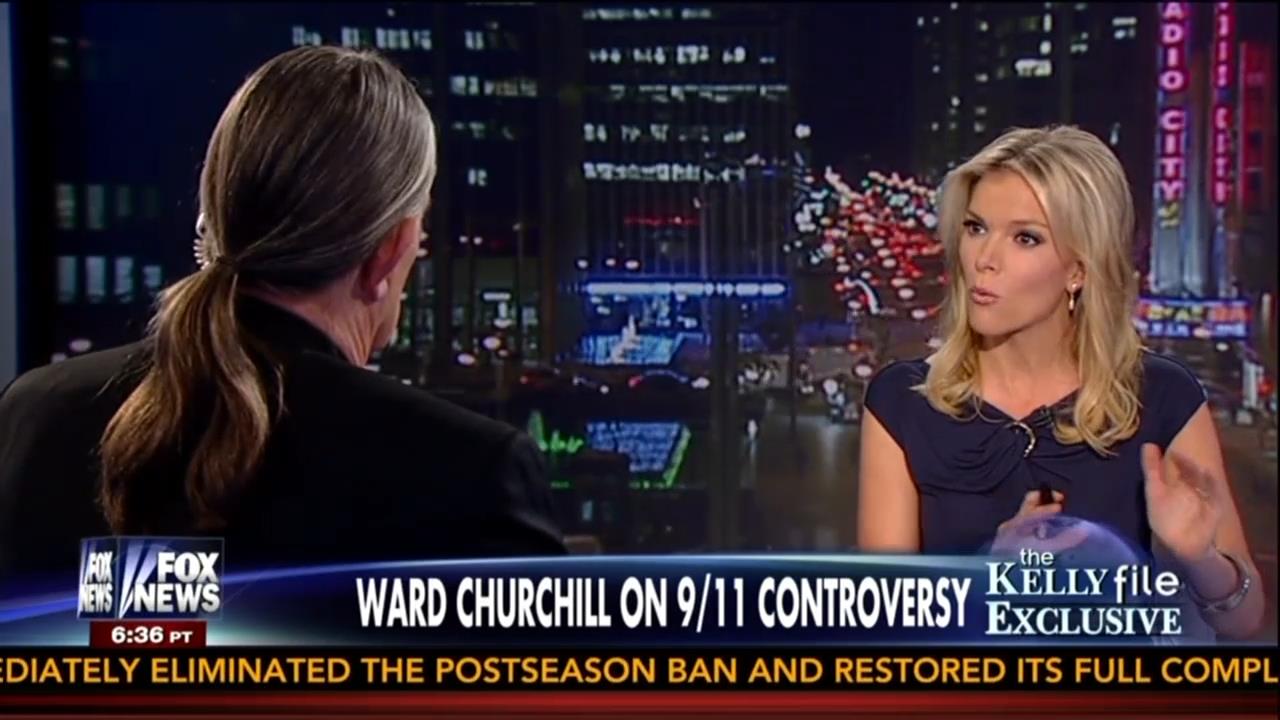 MEGYN KELLY: Ward Churchill is the former University of Colorado professor. Thank you for being here. So, the day of the 9/11 attacks you wrote an essay and referred to the 9/11 victims as Little Eichmanns writing, quote, “if there was a better more effective or, in fact, any other way of visiting some penalty befitting their participation upon the Little Eichmanns inhabiting the sterile sanctuary of the Twin Towers, I’d really be interested in hearing about it. How could you draw a moral equivalence between 3,000 dead Americans and a murderous Nazi like Adolf Eichmann?”

WARD CHURCHILL: Well, first off, I did not make a reference to 3,000 Americans in that connection. I made a reference to what I described as a technocratic core of empire which was a particular group within that 3,000.

KELLY: The folks in the Twin Towers?

CHURCHILL: Twin Towers, there was also a body count at the Pentagon that day. So, we have two separate groups here. But within that, there are various subgroups. And I’m not quite sure that you could describe a food service worker or a janitorial staff or passers-by as being part of a technocratic core of anything. So, self-evidently I was referring to a particular subgroup or particular subgroups.

KELLY: Okay. So, you exclude the firefighters, the police, the janitors, the folks who were not working in the financial services industry?

CHURCHILL: Yeah. If there is some definition you can apply to them that would make them technocrats, I'd have to revise that, but I can't think of one.

KELLY: Okay then let's talk about the folks to whom you do assign some blame or who you were suggesting, in some way, deserved the attack. How? How on earth could you say that?

CHURCHILL: Essentially in the same way that the United States government and the military have designate these as legitimate targets. We’re talking about command and control infrastructure, we’re talking about the ability of an opposing power, a hostile power.

KELLY: Our military doesn't target civilian facilities. They may target dual facilities that serve both the military and other purpose, but they do not intentionally target civilians as the terrorists did to us on 9/11.

CHURCHILL: Quite the contrary. You have actual projections that are made prior to strikes as to what the quantity of collateral damage will be. So, it’s done with full knowledge that there's going to be civilian casualties, non-combatant casualties.

CHURCHILL: What does that mean? What exactly does try to avoid them mean when you’re attacking a target in full knowledge that you're going to inflict a so-called collateral damage and you think that is an acceptable price to pay?

KELLY: I wanna get to what specifically you said...

KELLY: Wait, one second and I’m going to give you the floor. What specifically you said about the financial workers who were in the World Trade Center, because when I read your words written on the day of the attack, I mean, while the bodies were still smoldering, it sounded like you had a disdain for these Americans. And this is what you wrote, “to the extent that any of them were unaware of the costs and consequences to others of what they were involved in, it was because of their absolute refusal to see. More likely it was because they were too busy braying incessantly and self-importantly into their cell phones, arranging power lunches and stock transactions, each of which translated conveniently out of sight, mind and smelling distance into the starved and rotting flesh of infants. You sound like not only do you blame them but that you dislike them.

CHURCHILL: What I'm saying is for effect, in essence, the message is this is what it feels like to be treated this way.

KELLY: That's every American with job does. That’s what you did when you worked at the University of Colorado pulling in six figures a year, you made money. And the American military is funded by taxes from individuals and businesses.

CHURCHILL: You make money one way or you make a money another way. There are ways to make money which are criminally sanctioned.

KELLY: But, Professor Churchill, you're too smart to believe that. The American military is funded by taxes. My taxes, your taxes,

KELLY: Taxes paid by the folks who worked in the World Trade Center, money is fungible. And we all funded those actions, not just those folks, you too.

CHURCHILL: Did I say I was innocent? Yeah, I understand. My taxes go into that. And I resist it, I reject it, I oppose it, I do what I can to bring it to a halt which is probably not sufficient because I have not been successful.

KELLY: Let's talk about the Little Eichmann’s reference, because that's one of the pieces of what you wrote that got people so upset. Adolf Eichmann, you described as him as technocrat, in within the Nazi Army.

CHURCHILL: Bureaucrat would work too.

KELLY: The Nuremberg trials found him in charge of the extermination program against the Jews. He was the one in charge of the final solution, which was, eliminate all the Jews. They don’t think he was a technocrat of any sort. And so, for you to compare these dead Americans to one of the worst, most bloodthirsty Nazis of World War II incensed a lot of people.

CHURCHILL: Well, I don’t know whether if you've read the Nuremberg proceedings, I have, and that's not what they said. They said...

KELLY: You know what I read?

KELLY: So, he was just a paper pusher as far as you're concerned.

KELLY: Okay. But what I did read was his own words, because he, the viewers should know, actually escaped after the war and took refuge in Argentina under a different name before he was ultimately captured by the Mossad, the Israeli forces and put to death, the only man in the history of Israel to be put to death by execution. But what he said while he was hiding in Argentina is as fallows. Number one, he said, quote, “you know, I called my men into my Berlin office and formally took leave of them. If it has to be, I told them, I will gladly jump into my grave in the knowledge that 5 million enemies of the Reich have already died like animals.” He went onto say, quote,” to sum it all up, I regret nothing, I recognized Hitler joyfully and I still defend him. I will not humble myself for repenting ay way. I must say truthfully that if we had killed all the 10 million Jews, I would say, good, we have destroyed an enemy.” Doesn't sound like a paper pusher.

CHURCHILL: You, kind of, left a critical piece out of your account of what happened with Eichmann...

KELLY: I think this is sufficient to bring home the point.

CHURCHILL: Okay. There was a trial in between the point that he was taken by the Mossad from Argentina and the point in Israel, he was hanged. And in that trial they never found Adolf Eichmann guilty or even really attempted to prosecute Eichmann for killing a single Jew.

KELLY: You’ve made [sic] a distinction between actually turning on the gas and ordering it.

CHURCHILL: He could say we based on the fact that he made it possible for that to happen without directy–

KELLY: Of course he did.

CHURCHILL: Yes, that's my point on the Little Eichmanns.

KELLY: I mean, it’s very clear what he did. I mean, he was the one who recommended the use Zyklon B for the gassing of the Jews, and took steps to supply all of it to the camps. You can't say he doesn’t have blood on his hands just because he wasn't the one who turned on the gas when he made sure it got there. That’s the man you’re comparing the dead Americans to.

CHURCHILL: Thank you. You just made my point perfectly. You do not have to be the one who turned on the gas if you're making it possible for the gas to be there and someone to turn the knob.

CHURCHILL: If you're part of that process lending your proficiencies to making it more efficient, you are culpable in the process.

KELLY: So, you see a moral equivalence between the man who did that and said I'm happy, I’ll gladly jump into my grave knowing that all these Jews have died like animals. That’s the same thing, the same mentality, as the victims of al Qaeda in those trade -- Those twin Towers had. That's your point?

CHURCHILL: In so far as you lend you proficiency, knowingly to a process that results the mass and maceration and miserable death of third world brown skinned children for profit, profit maximization, it's not mysterious.

CHURCHILL: Okay? When you do that, you’re part of that process which is a process of just routinely and continuously inflicting carnage on others, identifiable others.
KELLY: Just like Adolf Eichmann.

CHURCHILL: Yeah. Essentially you're the moral equivalent of Eichmann.