Mediaite’s Joe Concha made the point of Sharpton’s power these days by measuring with four “power indicators” that illustrated just what gives a man infamous for his race card playing his clout. In brief, they were: 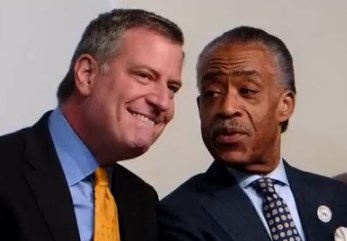 2) a “nobody owns him” factor that was verified using a Quinnipiac poll that gives Sharpton a 69% favorable rating by New York City’s African-Americans as their leader, beating out President Obama and Congressman Charlie Rangel;

And -- drumroll, please -- Power Indicator # 4 is that “Unlike the rest of us, he’s excused from paying taxes.” The latter point stunningly correct, Sharpton’s massive unpaid tax bills clearly one big no-never-mind to even the president himself.

But to the point here the most important indicator of Sharpton’s power, as noted by Concha with what seems to be unerring accuracy, is Power Indicator # 3, Sharpton’s hour-long nightly show on MSNBC. Not only is Sharpton a lousy, painful-to-watch TV host, his ratings are somewhere below the cellar, losing his time slot regularly and worse than badly to CNN’s Wolf Blitzer and, of course, to Fox’s Bret Baier. Yet there is not a hint that Sharpton’s show will get the axe from the network.  And why might that be? In Concha’s perceptive words;

“So if the ratings are bad and the delivery even worse, why and how does Sharpton still have a program on the air? Answer: Because Comcast and NBC — and this is just an educated guess — must be petrified to fire him (by, yes, the race card being turned against them). Remember, Sharpton gave his crucial blessing to the Comcast/NBC Universal merger a few years back. Not long after, he was magically given his own show at 6:00 p.m. on MSNBC. Reciprocity at its finest.”

Not since President Woodrow Wilson used the White House to showcase the film Birth of a Nation has such a stark reveal existed between progressive leaders, their media camp followers, and their joint and constant need to play the race card -- use out and out racism --  for everything from getting votes to ratings or audience support.

But surely somebody has to wonder whether Comcast/NBC will now allow themselves to be portrayed as the network that gives TV hosting duties to a man accused by no less than a former New York City police commissioner (among others) of having blood on his hands after the killing of two New York City policemen in the wake of the Eric Garner grand jury decision. Specifically, former Commissioner Bernard Kerik lumped Sharpton specifically in with New York Mayor de Blasio when he said of the assassinations of the two NYPD cops:

As noted, this business of progressives handing media power to out-and-out racists is not new. Birth of a Nation is an eerie arly 20th century counterpart to Sharpton’s presence on a 21st century cable news show. For those who came in late, the film was based on Thomas Dixon Jr.’s 1905 novel The Clansman: An Historic Romance of the Ku Klux Klan. The plot involved the demonizing of black Americans in the most racist of terms. The rising young ( and anti-black) movie director D.W.Griffith loved the book and rounded up the money to buy the rights and get it turned into a film. When the film came out there were, surprise, sharp protests in, among other cities, New York and Boston.  How to get around this? Dixon called on an old friend - fellow progressive and racist Woodrow Wilson, by 1915 in his third year as President of the United States and, like Barack Obama today, the point man in the progressive urge to transform America. Wilson happily showcased the film at the White House, giving the racist Dixon’s story massive favorable publicity. The film grossed $18 million, a bonanza in the day.

In turn, Birth of a Nation was said to have played a role in launching a serious revival of the Ku Klux Klan. An Atlanta newspaper ran an advertisement for the film - right next to a recruiting ad for the Klan. Within six years a hundred thousand Klansmen had signed up for what was called the “Invisible Empire” - the tone set by the film and President Wilson’s endorsement effectively launching years of Klan violence.

In other words, this marriage of media to racism was a potent cocktail. In today’s world, Sharpton is the race card player, aided and abetted not just by a Wilson-like progressive in the White House. Comcast/NBC is playing the role of D.W.Griffith, showcasing the race-card playing Sharpton five nights a week on its air, lousy ratings be damned. And just as the Griffith film was said to have inspired the re-birth and violence of the Klan, so too, as witness that charge from former Commissioner Kerik,  is Sharpton being blamed (and not just by Kerik) for setting the tone that has now resulted in what the current NYPD Commisioner Bill Bratton calls the outright “assassination” of the two New York cops.

The media question here is as simple as it is blunt. Comcast is rapidly gaining the reputation as a network that is allowing a man with “blood on his hands” -- the blood of two policemen -- to be showcased five nights a week on their airtime.

Is this really a smart idea for a media company that is looking to do all manner of deals in the media world? With Time-Warner and who knows who else? Or perhaps the real question is why this company continues, D.W.Griffith-style, to allow itself to be used to propagate not just racial hatred but hatred of the police. A hatred that, as mentioned, has now killed two cops. 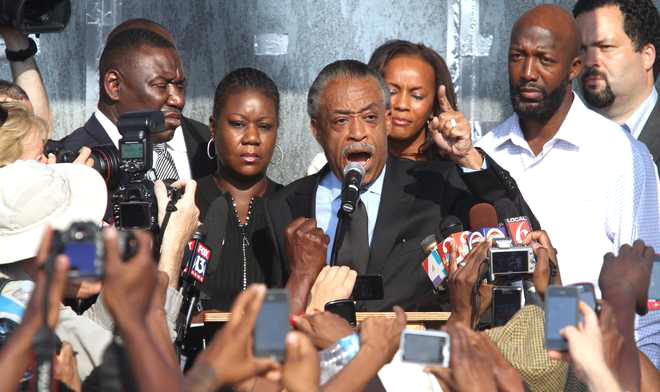 Is this the reputation Comcast/NBC really wants? Isn’t anybody - anybody? - over at NBC embarrassed at a minimum and horrified at a maximum that the network of Huntley and Brinkley, John Chancellor and Tom Brokaw, not to mention today’s Brian Williams and Matt Lauer - are sanctioning a man with a reputation as, in the words of former NYPD Commissioner Kerick -  having an “anti-cop, racist mentality."

One of the regular features on Me-TV, an entertainment network devoted to showing old Baby Boomer-era  television shows, has used the Christmas holidays to air old episodes of Adam-12, a show about two Los Angeles cops. The cops, played by actors Martin Milner and Kent McCord, are celebrated as two ordinary guys - good cops.

As the New Year approaches, with MSNBC boasting of Al Sharpton as one of their hosts, Comcast-NBC is one long way from celebrating the values of Adam-12. In fact, the network looks more and more every day like the home of the values portrayed in Birth of a Nation. Whether the end result of this progressive media alliance with racism was the revival of the murderous, racist Ku Klux Klan almost a century ago or the assassination of two New York City cops today, the end result is the same.