CNN's Erin Burnett to Pam Geller: Do You 'Relish' Being Targeted for Beheading?

Yet another deadly incident in the United States involving suspected jihadists, yet another excuse for a liberal in media to blame anti-Islamist warrior Pamela Geller.

In the wake of Boston police killing a Muslim extremist who allegedly lunged at them with a military-style knife, CNN's Erin Burnett wasted little time contacting Geller after her network reported that the man is believed to have conspired with others to decapitate Geller.

It was only a month ago that two radical Islamists were killed in a shootout with police in Garland, Texas where Geller and others organized a Draw Muhammad cartoon contest. Geller, president of the American Freedom Defense Initiative and Stop Islamization of America, has warned for years of the threat from jihadists on her blog Atlas Shrugs.

BURNETT: CNN is reporting you were the beheading target. What's your reaction to that?

GELLER: Well, they targeted me for violating sharia blasphemy laws. They mean to kill everyone who doesn't do their bidding and abide by their law voluntarily. This is a showdown for American freedom. Will we stand against this savagery or bow down to them and silence ourselves? It won't end with me, no matter what happens to me or the cops. This is just the beginning. The one thing that's being ignored that came out of Garland, Texas is that ISIS is here. Islamic terrorism is here. Now, will the media realize what's at stake and that their heads are next or will they continue to target me because they hate my message of freedom? That's the question.

BURNETT: Do you have extra security at this time? Obviously, you know, the Prophet Muhammad cartoon contest in Texas, you were the one behind that. There was, obviously, some people died during that, there was a gun fight ...

Clarification -- it wasn't just Geller at fault but also the inherently dangerous presence of firearms.

BURNETT: Do you have extra security? Do you think that they're going to target you again?

GELLER: A couple of corrections. A couple of people didn't die. The jihadists, who came to slaughter hundreds of people, were taken out as they shot at our police. ... The second thing, it was an art exhibit depicting Muhammad through the past 1,400 years when he has been rendered in various pieces of artwork and it didn't lead to slaughter. It's obviously being used now. Modern jihadism is using these blasphemy laws and this violent intimidation to impose the sharia.

Yes, of course, the answer to your question is, since Garland, Texas, I've had an army of security. This is what is required just to show a cartoon in America, 2015. It's striking, it's devastating and people need to understand what's at stake. I mean, if we surrender on this point, then what will we surrender next?

Women's rights? Gay rights? Perhaps both, as Rush Limbaugh perceptively pointed out last month. After all, both really anger militant Muslims. Isn't it time we roll back both to get ahead of this? Perhaps MSNBC could tone down its obsession with same-sex marriage. Hey, it's a start.

BURNETT: On that Draw Muhammad art cartoon event in Texas, obviously, you know, some people see it very differently than you see it, right?

We here at CNN, for example, side with jihadists on this and not you ...

BURNETT: You see it as an art event, they see it as showing pictures of the Prophet Muhammad who should not be drawn. You know, you obviously have done other things. You remember those ads on the New York City subways? You took the transit authority to court, you won, you were able to post some ads ...

An unfortunate consequence of the First Amendment remaining in effect ... for now ... 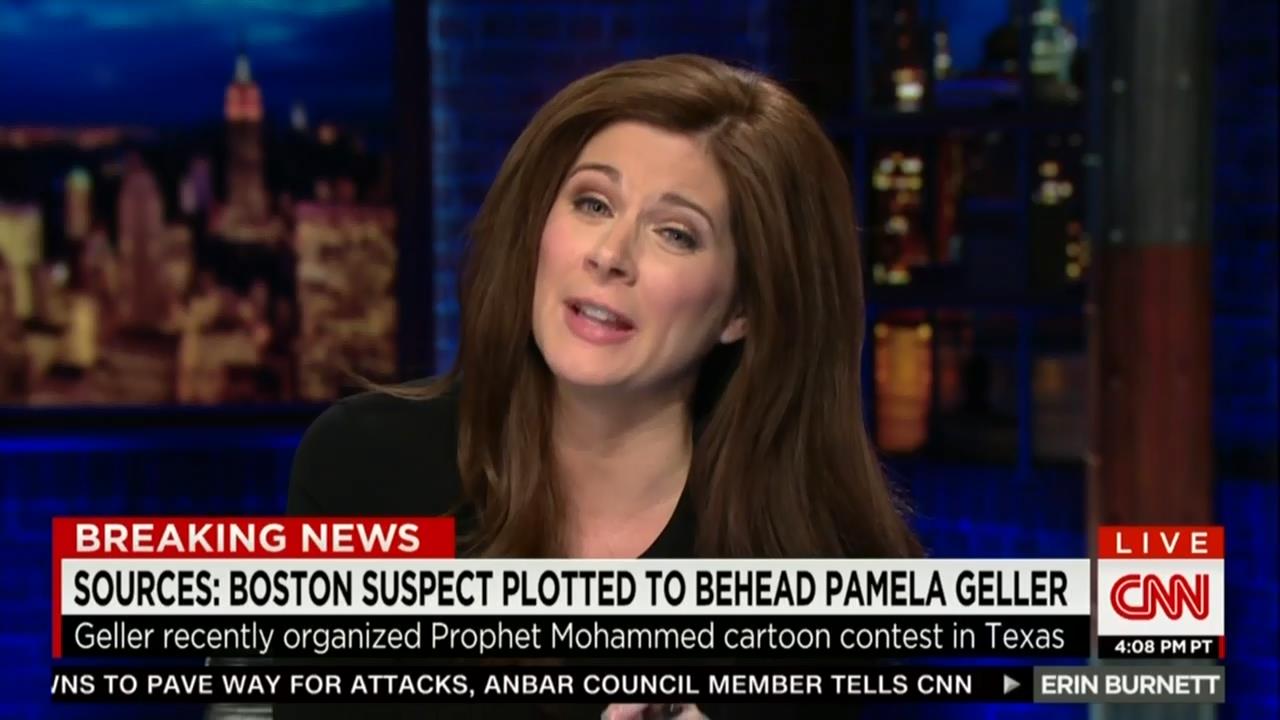 And Pam, remember that night you wore a bright red dress with a low neckline to an art gallery opening in Greenwich Village? Who knows how many would-be rapists you provoked, especially in that part of town, but I digress ...

GELLER: I'm surprised that the media would side with those that would target me. Of course I'm not surprised that they would target me. This is a war and they seek to impose the sharia. The ads that I've done across the country were in response to vicious, anti-Israel, anti-Semitic ads already running. . And my question to you is, do we not want to defeat jihad? I mean, what is wrong with those ads? There is nothing wrong with the cartoon. There is nothing about the cartoon that incites violence. It is within the established American tradition of satire and if America surrenders on this point, the freedom of speech is a relic of history.

Continuing her earnest effort to discredit Geller, Burnett cited a watchdog group long revered by liberals for its unfailing habit of deeming only conservatives and right-wing fringe dwellers as hateful, all while raking in hundreds of millions through relentless fundraising appeals to gullible donors who discern racism in cloud patterns --

BURNETT: The Southern Poverty Law Center, as you're well aware has described your group, has described your group, the American Freedom Defense Initiative, as what they say, quote, is an active anti-Muslim group. They track hate groups in this country. They describe you as, quote, the anti-Muslim movement's most visible and flamboyant figurehead. Again, they track hate groups. They're putting you on that list.

Why aren't you bowing your head in shame?

Here comes the inevitable "but" ...

BURNETT: .... but it's important to note this. I mean, are you stoking the flames? Do you on some level relish being the target of these attacks?

Have you always been masochistic or did this start in adulthood ...?

GELLER (taken aback): 'Relish being the target' -- who self-promotes to get killed? That's the first thing. The second thing is, the Southern Poverty Law Center -- really, Erin? Since when? Who designated them the arbiter of anything? They're an uber-left group. They don't track jihadist groups. They don't track groups that actually target for slaughter. They track patriots, they track veterans, they track defense groups like myself and their members have actually targeted and tried to slaughter family groups and leaders like Tony Perkins (head of the Family Research Council) ... And even the shooter in North Carolina who shot three Muslims over a parking dispute was a member of the Southern Poverty Law Center. That's who you're using against me?

Why don't we talk about the accomplishments and the accolades that my group got? Why do you use the Southern Poverty Law Center, they're a notorious, uber-left, communist group, to slime me, to smear me? I'm the hunted one -- I'm the hunted one. This is incredible to me.

BURNETT: All right, as I said, I think nothing justifies a beheading ...

It's second only to drawing cartoons of the Prophet on my list of the worst crimes ...

BURNETT: ... but I do think the question was a fair one.

Burnett's actual question, rephrased -- When are you going to stop pissing off jihadists? Everyone knows what short fuses they have. Often, literally.

Sure sounded like a Freudian slip from Burnett in segueing to commentary from a CNN talking head with the intro, "I want to bigot, bring in ..."

With all due deference to Pam Geller, she's off the mark in warning Burnett and other liberals in media that "their heads are next." Isn't it more likely that useful idiots in media are way, way down the list of jihadist targets?