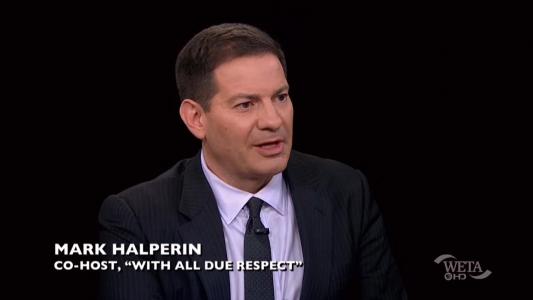 The political writing team of John Heilemann and Mark Halperin came on Charlie Rose’s PBS show, on Tuesday, to dissect Hillary Clinton’s e-mail scandal press conference and while the two were mostly critical, Halperin was definitely the softer of the two as he thought Clinton could escape yet another scandal:

“I think her performance today is enough to have Democrats come back into her corner...Based on her performance and her answers this will largely go away, except if there are new revelations.”

Halperin also graded on a curve as he reminded Rose that this was: “Her first political press conference since like 2008...strong performance under those circumstances,” and added that he thought Hillary “evaded, you know, somewhat deftly.”

For his part Heilemann was more skeptical of Clinton’s performance as he observed: “For people who want to be doubters, not just haters, but doubters there is still a lot of reason to have doubt. She did not resolve questions for people who are skeptical about her today...This kind of thing reminds people of the old Clintons and that is not what change looks like to people in the middle of the electorate.”

Although when talking about the those old Clinton troubles of the nineties, Heilemann seemed to dismiss much of them by surrounding them in quotes: “You can think about all those Clinton scandals that Mark just rattled off. Scandals I put in quotes - in a lot of cases. Cattle futures and all that kind of stuff.”

The following exchanges were aired on the March 10 edition of PBS’s Charlie Rose:

JOHN HEILEMANN: For people who want to be doubters, not just haters, but doubters there is still a lot of reason to have doubt. She did not resolve questions for people who are skeptical about her today.

CHARLIE ROSE: But if in fact it does, is this story gonna go away? And you’ll be back to basic questions of her political ambition and her political career and what she offers in the 2016 version of her desire to be president.

MARK HALPERIN: I think Republicans will continue to hammer on it. The head of the Benghazi committee said today he was gonna have her testify not just about Benghazi but about her email practices. I think it - I think her performance today is enough to have Democrats come back into her corner. And I think if there are no new revelations this is not some big thing. Before today, I did think it was a big thing. But she - I thought she - based on her performance and her answers this will largely go away, except if there are new revelations.
...

HEILEMANN: All I’m saying is that I agree that none of the specific things about it - but to the extent - the point you made Charlie and the point that Mark made about how it reminds people of the things they don’t like about the Clintons.

ROSE: As someone said today “I’ve had all the drama I need.”

ROSE: But, but from where? Just from the fact that -

HALPERIN: A thousand, a thousand directions. You know we’re gonna go back to parts of Whitewater and the billing...

ROSE: You certainly hope so, don’t you? [laughs]

HALPERIN: Well. I mean the billing records and the cattle futures and the Rose Law Firm. It’s all gonna come back. I mean, you know, the upside of her not having an opponent is she can spend - raise and spend all the money worried about a general election. And she doesn’t have to worry about being beaten if she doesn’t have a serious opponent. The downside is Republicans aren’t doing a lot of opposition research on Martin O’Malley and Bernie Sanders. It’s all on her. And that means that they’re gonna be able to trot this stuff out. And you know newspapers and television networks and magazines they’ve got investigative reporting budgets and there are 16 Republicans to look at and one Democrat and there will be a lot more investigating.

HEILEMANN: And you can think about all those Clinton scandals that Mark just rattled off. Scandals I put in quotes - in a lot of cases. Cattle futures and all that kind of stuff. All that nineties agita, right? And you can say one argument would be the Clintons survived it in the 1990s. Bill Clinton is an incredibly popular post, former president, etcetera, etcetera. Another part of it could - you can say that back in 2008 there was a large part of the Democratic Party, let alone the country, that sort of sighed wearily at the notion of going back to all of that stuff from the 1990s. All the Clinton Wars, right?

Are people, right now, will this not be a psychic overhang for her? That people will be reminded “Man that was just, that was a - impeachment and all of that.” If this stretches out and Republicans with Benghazi and there’s more subpoenas and there’s more of this and there’s more of that. What is the psychic toll that, that takes on the electorate, in terms of her prospects? I can’t tell you but it’s not good. Not good.

HALPERIN: I’ll tell you another thing about today. You know her first political press conference since like 2008. That’s a - I thought strong performance under those circumstances. But if it is true that we normally elect the most likeable person - today she was practiced, she was careful.

HALPERIN: Lawyerly. She evaded, you know, somewhat deftly. But that’s not her at her most likeable. I think she was good enough today to get elected if the Republicans nominate someone who is not particularly likeable. But she was not her likeable self - as likeable as she can be.