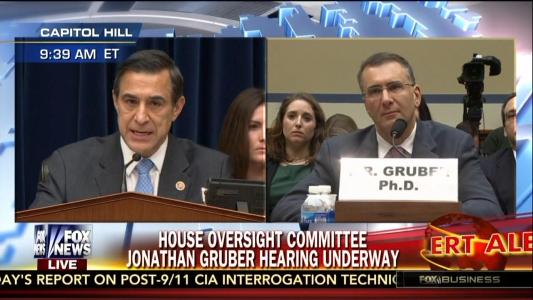 Tuesday’s congressional hearing that featured Jonathan Gruber being grilled about his controversial ObamaCare remarks was carried live by Fox News for 54 minutes, and 53 seconds. CNN and MSNBC didn’t bother to air any of the hearing live. The hearing lasted from 9:30am ET to about 1:35 pm ET, but the total amount of the Gruber hearing shown during that time on CNN and MSNBC came in the form of a handful of soundbites of Gruber’s apology.

In contrast, Fox ran almost an hour’s worth of live coverage off and on from about 9:32 am ET through 11:11 am ET. The hearing ran mostly uninterrupted during that time with the exception of a few commercial breaks and an interview with Rudolph Giuliani commenting on the testimony.

Over on MSNBC, Craig Melvin, substitute-hosting for Jose Diaz Balart, asked correspondent Kelly O’Donnell: “How much of a side show are we expecting here?” Then later in the 10am ET hour Melvin told viewers: “Some breaking news we want to tell you about right now. That House hearing on ObamaCare. Again economist Jonathan Gruber, on the hot seat, wasted no time apologizing for some of those controversial remarks that he made about ObamaCare and voters. Take a listen.”

A 47-second clip of Gruber’s apology was then shown. Melvin played another 19-second clip later in the hour.

The only time CNN viewers heard any of the hearing came during the 10:30am half hour of CNN’s Newsroom with Carol Costello. Correspondent Joe Johns teased the 38 second Gruber soundbite:

JOE JOHNS: “The headline is that he basically issued a mea culpa apologizing over and over again. Look Jonathan Gruber is in just about the worst position imaginable for a witness before a congressional committee. Republicans are seeking to make hay over his comments. Democrats are just absolutely furious about what he was caught on video saying. So let’s listen to a little bit of what he said and then come back and talk about it.

JONATHAN GRUBER: I’d like to begin by apologizing sincerely for the offending comments that I’ve. In some cases I made uninformed and glib comments about the political process behind health care reform. I’m not an expert on politics and my totem implied I was, which is wrong. In other cases I simply made mean and insulting comments which are uncalled for in any context. I sincerely apologize for conjecturing with a tone of expertise and for doing so in such a disparaging fashion. It’s never appropriate to make oneself seem more important or smarter by demeaning others. I knew better, I know better, I’m embarrassed and I’m sorry.”