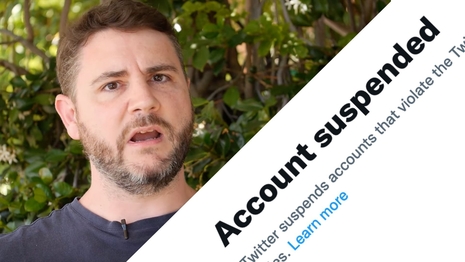 “Twitter and other big tech use censorship to protect evil, in this case the institutional sexualization of children,” Lindsay told MRC Free Speech America, “It must stop. We must protect our children.”

“Your misogynoir is showing,” Caraballo said.

Caraballo celebrated Lindsay’s suspension and claimed responsibility for his removal from the platform. “Good riddance,” she tweeted alongside a screenshot of Linday’s suspended account. “Tell James, I want him to know it was me.” Caraballo then shared screenshots indicating she had reported Lindsay’s tweet for “hateful conduct.”

Twitter also hypocritically “violated [its] own hateful conduct policy” in its message to Caraballo, pointed out The Babylon Bee CEO Seth Dillon. In its message, Twitter misgendered Lindsay as “they,” as indicated by screenshots posted by Caraballo. Dillon tweeted: “[Lindsay] just texted me ‘I am not “they.” Twitter must now suspend itself.”

Last year, Twitter restricted Lindsay’s account for 12 hours, requiring him to delete another “Ok groomer” tweet in order to regain full use of the account. His post responded to a user who tweeted that no-one had made an “airtight case for the anti-pedophilia side.”

Lindsay was also reportedly locked out of his account for violating Twitter’s policy against “misleading and potentially harmful information related to COVID-19.” In his tweet, he called vaccine passports “systemically racist,” according to a CensorTrack entry.